You don't need much up-front money to buy these stocks with great growth prospects.

One of the biggest myths with investing is that you must have a lot of money to get started. Another investing myth is that you have to pick the exact right time to buy stocks.

The reality is that you can invest with nearly any upfront amount and at any time. Here are three top stocks to invest $100 in right now. 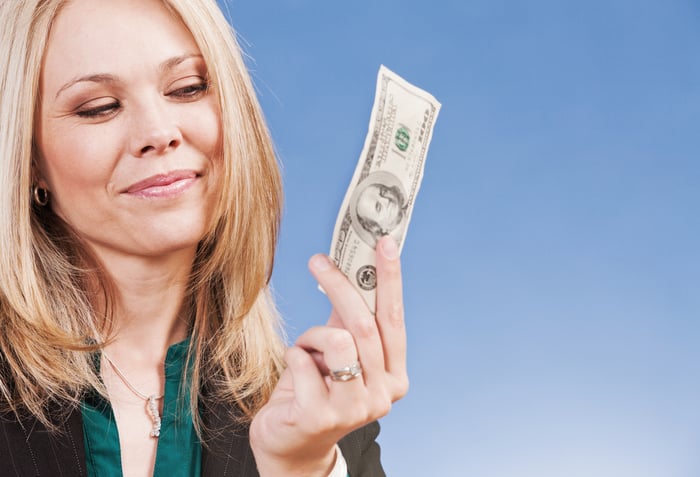 You can scoop up a couple of shares of Brookfield Renewable (BEP 1.08%) (BEPC 0.80%) for less than $100. And you have two choices. The company's limited partnership (LP) shares trade under ticker BEP and its corporate structure shares trade under ticker BEPC. It's the same underlying business with both stocks. BEP, though, comes with some tax hurdles as an LP that BEPC doesn't have.

Renewable energy definitely ranks as one of the leading unstoppable trends to invest in. Many of the world's countries with the largest economies have committed to drastic carbon emissions reduction over the next three decades. Increasing supply of renewable power is critical to achieving those goals.

Management targets total annual returns of between 12% and 15% over the long term. With the surging demand for renewable energy likely to accelerate in future years, this growth should be easily attainable.

Bank of America (BAC -1.29%) is a financial services giant with a market cap of over $370 billion. But you can buy a couple of shares of the huge company with $100 and still have some cash remaining.

The company has invested heavily in technology in recent years. These efforts have led to the launch of the banking industry's first widely available artificial intelligence virtual assistant and peer-to-peer payments app Zelle.

Bank of America CEO Brian Moynihan even said in a CNBC interview in July, "We are a technology company." This technology focus should benefit BofA as the dynamics of the financial services market change rapidly.

It's not surprising that Bank of America consistently ranks near the top of the lists of the best bank stocks to buy. Neither is it surprising that it's legendary investor Warren Buffett's favorite bank stock and second-largest holding overall.

You'll only be able to buy one share of Trupanion (TRUP 3.42%) with $100. However, it should be money well invested if analysts' projections are right. The consensus Wall Street price target for Trupanion reflects a premium of 47% to the current share price.

Trupanion is the leading provider of medical insurance for cats and dogs in the U.S. and Canada. It has more than 1 million pets enrolled, with the number jumping 38% year over year in the second quarter.

There are a few other companies that focus on the pet insurance market. However, Trupanion offers the broadest coverage. It also has a key competitive advantage with its software platform that supports fast direct payment to veterinarians at checkout.

Only around 1% of pets in the U.S. and 2% in Canada are covered under medical insurance.  With pet ownership rising, the company should be able to deliver strong growth as it increases market penetration.