Even a relatively small sum of money affords you access to a proven winner in a booming industry.

Deciding to first put money into the stock market is only half the battle. Finding the right stocks and then holding them long enough so they pay off is the other, more challenging half.

Luckily for you, there are a select number of outstanding businesses in the market that make for a solid investment today. One of these businesses, Netflix (NFLX 0.26%), could arguably be the best stock to buy right now that's priced under $700 a share.

Let's find out why you'll want to own stock in this streaming giant now and for many years to come. 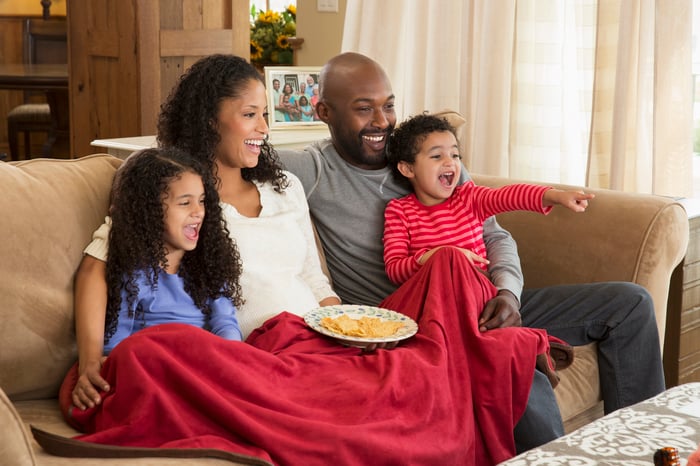 Showing up first to the party

More and more streaming services are appearing every day, but what makes Netflix special is its scale. Because it was one of the first to the streaming party, the $280 billion company has an advantage over competitors. With trailing-12-month revenue of $27.6 billion and 209 million subscribers today, Netflix has the resources to outspend rivals on content, a necessary component to success in this industry.

Through the first six months of 2021, the business spent $8 billion on producing or licensing new series, movies, and documentaries for distribution to its subscribers. Netflix is willing and able to lay out massive amounts of money on content because it makes complete financial sense, as it can spread out the cost among its huge user base. This is much less feasible for smaller services like ViacomCBS' Paramount+ or Comcast's Peacock to do without taking on lots of debt. Even then, it would be an uphill battle trying to attract new customers because of how crowded the streaming market is today.

Racking up the awards

Netflix's content is also really good. At the 2021 Emmy Awards, the business took home 44 wins, tying a record by a single network that was set in 1974. The ability to outspend peers when it comes to producing content clearly increases the odds of delivering award-winning shows and movies. This competency has been built up over the past decade, and it's why some of the best screenwriters want to work with a media company like Netflix.

Offering viewers some of the world's best content has given Netflix pricing power. Management has been transparent about Netflix's pricing strategy, occasionally asking members to pay a bit more for such a high-quality service. The most recent price hike occurred about a year ago, but in the full quarter following the announcement, engagement was up and member churn was down compared to the prior-year period.

I believe subscribers increasingly view Netflix as a consumer staple, hesitating to cancel their memberships even during adverse economic times. This is exactly the type of business that you want to own for the long haul.

Netflix actually lost 430,000 subscribers in the U.S. and Canada in the second quarter, which is a possible signal that these lucrative markets are close to maturity when it comes to streaming penetration. But Netflix has already recognized this, and that's why pushing international growth is such a major focus right now. During the most recent quarter, 56% of sales and 2 million new customers came from outside these two North American countries.

Greater broadband internet access coupled with rising discretionary income support Netflix's overseas ambitions. India in particular is an exciting growth opportunity, the company plans to spend hundreds of millions of dollars there to develop 40 local productions in the near future. Aggressively going after a country of 1.4 billion people and more than 622 million internet users is the right strategy for Netflix to drive global expansion.

Having a first-mover advantage, creating fantastic content, and tapping the huge potential in foreign markets make Netflix an outstanding business to own. For less than $700, you could buy one share of this leading streaming stock.