The biotech looks poised -- at last -- to thrive and generate significant revenue growth.

It's been a harrowing quarter for Novavax (NVAX -4.71%) investors. The stock is down by more than 13% over the last three months, and even with approval for its coronavirus vaccine candidate seemingly in sight, it's reasonable to wonder whether the company's stock is worth purchasing.

Based on its upcoming catalysts, I think Novavax's losing streak will end before the close of 2021, and that rumors of its demise are exaggerated. Let's take a look at what I expect will be the two main drivers of the stock's near-term performance, and one caveat that investors need to take into account when they evaluate whether to buy it. 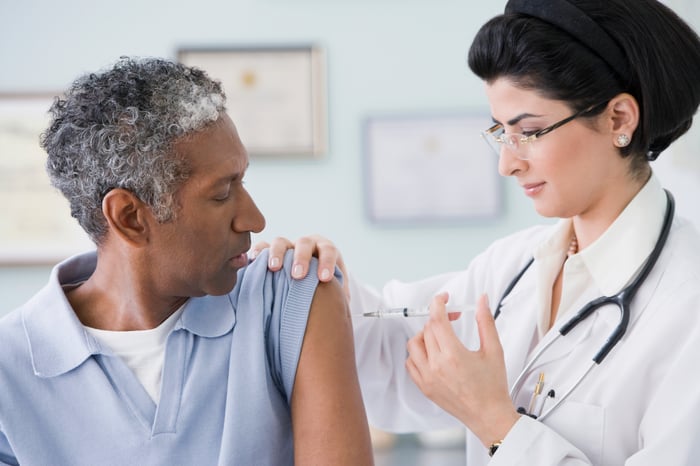 After suffering from months of delays stemming from issues with its manufacturing facilities, Novavax is almost ready to apply to regulators for an Emergency Use Authorization for its COVID-19 vaccine candidate. Management expects to make its FDA submission this quarter, and, if regulators like what they see, an approval could follow shortly thereafter. That means 2022 is likely to be the first year where the company recognizes revenue from sales of a vaccine that it developed.

Novavax plans to produce at least 2 billion doses over the course of next year. If each dose sold for around $21, the price that Denmark recently agreed to pay for its preordered lot, the company would be looking at a top line of $42 billion or more. That would put its revenue in excess of major competitors like Moderna (MRNA -1.36%), which has only signed advance purchase agreements worth up to $20 billion for 2022. However, Novavax's actual average selling price is likely to be much lower, as management has indicated that major future customers like India will be charged only a few dollars per dose.

Regardless of how it prices the vaccine, assuming it gets regulatory approval, 2022 will see income growth unlike anything in the company's history, and its stock might rise considerably as a result.

A pair of promising candidates are moving through the pipeline

The second reason to buy Novavax's stock is that it has a pair of projects that could soon significantly build on its nascent revenue base.

Most importantly, its NanoFlu influenza vaccine successfully completed its phase 3 clinical trials and is awaiting approval for commercialization. As NanoFlu was proven to be at least as effective as one of the current leading flu vaccines, it should be able to capture some market share if regulators give it the go-ahead. But, because the entire global influenza jab market is worth an estimated $6.6 billion in 2021 according to a report by Fortune Business Insights, it's important to remember that Novavax stands to gain a slice of a much smaller pie than what it might in the coronavirus vaccine market.

The company is also developing a combination inoculation against both influenza and the coronavirus. A phase 1/2 clinical trial for that product started in September. From a public health perspective, combination jabs could save a significant amount of healthcare resources: It's much easier to protect large populations from infection if people can be safely and effectively vaccinated against multiple illnesses in a single shot.

If both NanoFlu and the NanoFlu/COVID vaccine combination get approved in the next couple of years, Novavax will be positioned to capture a significant amount of recurring revenue each year. In the long run, it's conceivable that its combination vaccine could even outsell its original coronavirus jab. Of course, Moderna is also working on a combination shot, not to mention its own stand-alone flu vaccine, but both are still in the early phases of clinical trials, so they don't loom as large threats right now.

Can Novavax live up to its valuation?

The main concern investors could have with Novavax is that its valuation may still be excessive in the context of the revenue that it's likely to bring in. Its shares currently trade at a price to sales (P/S) multiple of 9.87, which is more than double the biotechnology industry's average P/S of 4.85. With that being said, its valuation is likely inflated by investors expecting rapid revenue growth to continue.

During Q2, Novavax clocked in at 738.6% year-over-year quarterly revenue growth, earned via its advance purchase agreements. If that pace accelerates for a couple of quarters as the vaccine rollout commences, the stock could prove to be appropriately valued.

Plus, the frothiness is starting to die down. With Merck announcing that it will soon apply for regulatory approval for a new antiviral pill that appears to be an effective treatment for coronavirus infections, Novavax's stock has continued to fall -- it's now down by more than 34% over the last month. In other words, the market is pricing a significant reduction in Novavax's probable future revenue into its stock based on the outlook for Merck's therapy.

Still, I wouldn't be too surprised if Novavax stock soared following the approval of its COVID-19 vaccine, whenever that occurs. However, until investors can see some firm sales figures and receive management's 2022 earnings guidance, it's likely that the stock's valuation will remain in flux.