Each has its own reason for being in your portfolio.

Most investors will tell you they love to buy stocks when they are cheap. But that typically means taking on some uncertainty. After all, Wall Street doesn't sell a stock unless it believes there is a better place for the money -- at least in the short term.

That's why long-term investing can provide such an advantage. Knowing you plan to hold for years, and not having anyone but yourself to answer to, can focus your analysis on the company and its prospects. That might seem obvious. But it isn't as easy as it sounds to block out the noise. 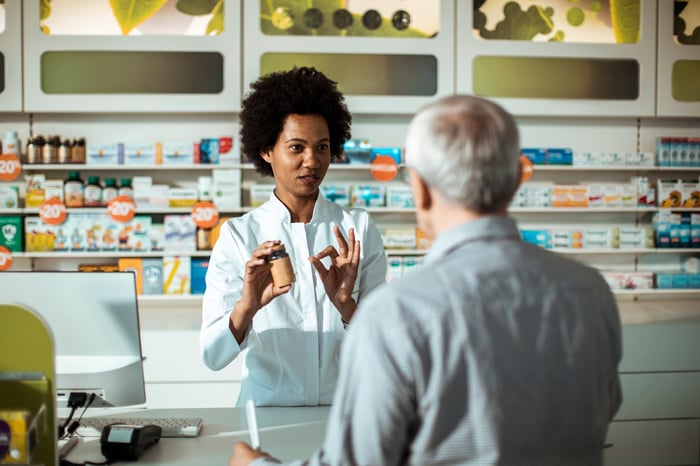 As company reputations go, Johnson & Johnson offers one of the strangest juxtapositions. In February, the company ranked as the most admired company in the pharmaceutical category on Fortune Magazine's annual list for the eighth consecutive year. It ranked 15th overall, up from number 26 last year.

Meanwhile, it recently joined three drug distributors in settling claims related to the U.S. opioid epidemic without admitting wrongdoing. The healthcare giant will kick in $5 billion for its share of payments to 42 states, five territories, and Washington, D.C. It's another in a growing list of legal resolutions for its actions related to product safety over the past decade-plus.

The company and its investors are hoping to clean the slate as Alex Gorsky moves to the executive chairman role and makes way for new CEO Joaquin Duato. Regardless of who is at the wheel, the company remains one of the most stable, diversified healthcare companies on Earth. For the first six months of this year, 50% of revenues were from outside the U.S. Its pharmaceutical, medical devices, and consumer health divisions accounted for 54%, 30%, and 16% of sales, respectively.

As for valuation, the stock is trading at 16 times trailing-12-month cash flow. That's below its average over the past five years and the lowest level since before the pandemic. 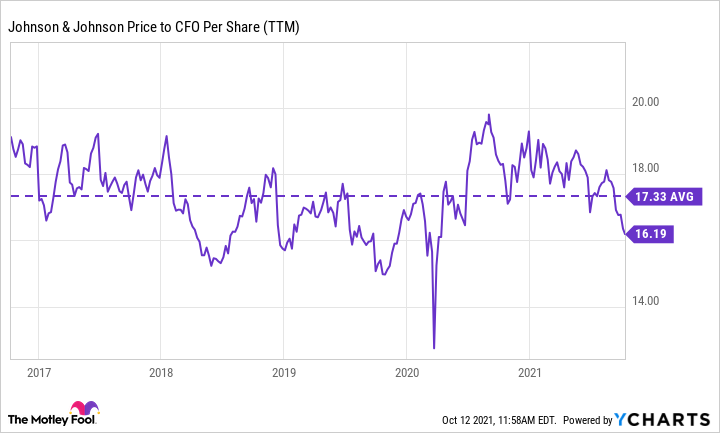 JNJ Price to CFO Per Share (TTM) data by YCharts

With a hand in virtually every area of the healthcare industry, new leadership, and a big legal concern behind it, now might be the best time to pick up shares. Management recently raised the dividend for the 59th consecutive year. It now yields almost 2.7%. Investors looking for the combination of stability and income at a fair price might not find a better choice than shares of Johnson & Johnson right now.

This maker of continuous positive airway pressure (CPAP) devices has several tailwinds right now that might make its historically high valuation a bargain. Despite the temporary closure of many sleep clinics -- the ones responsible for diagnosing its sleep apnea customers -- the need for ventilators during the pandemic pushed revenue up 9% for its fiscal 2020 ending last August.

This year, as clinics were open and ventilator sales fell off, the company still grew 14%. Part of that was thanks to a product recall from its primary competitor. Sales should continue to be boosted through next year. Wall Street has noticed.

Before the pandemic, the stock typically bottomed around 30 times operating cash flow when the market turned volatile. Now, ResMed shares trade at a 60% premium to that. That's even after falling 15% from its recent high. 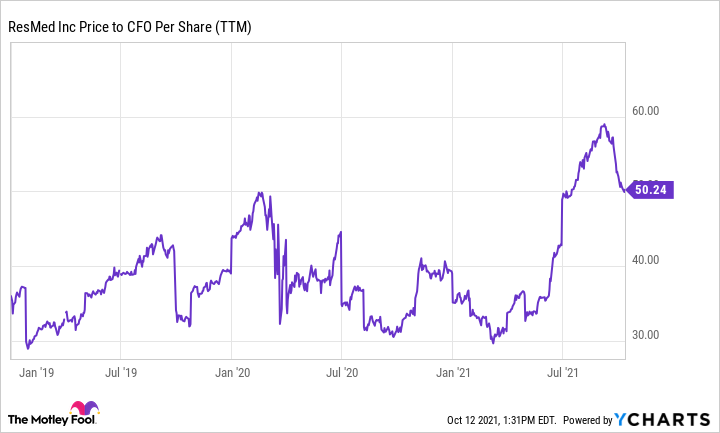 RMD Price to CFO Per Share (TTM) data by YCharts

Although supply chain issues are holding the company back for now, that is expected to abate early next year. Analysts are expecting up to $4.1 billion in sales for fiscal 2022. Based on its historical cash flow generation, that would mean the stock currently trades for about 37 times 2022 operating cash flow -- much closer to historical norms.

Although it will be methodical, the company still has enormous growth potential. It claims more than 15 million lives changed through its devices and is targeting 250 million by 2025. If that sounds like a stretch, consider that management believes there are 1.6 billion people in the world with undiagnosed sleep apnea, chronic pulmonary obstructive disease (COPD), or asthma -- illnesses its products help people live with. An opportunity like that makes any sell-off a good opportunity to add shares for long-term investors.

It's hard to find a stock that has traded more closely in line with COVID-19 cases than Fulgent Genetics. While cases and testing volume whipsaw the stock by the day, its core genetic testing business continues to grow by leaps and bounds. It's creating quite a disconnect -- one that I think long-term investors can take advantage of.

While U.S. cases -- and subsequently the positivity rate of tests -- have come down, overall COVID testing volume remains relatively high compared to this past January. Cases and testing will vary by state. But it could mean the stock has sold off far more than actual testing volume warrants.

Beyond COVID-19, the company continues to grow its core genetic testing business. In the first two quarters of this year, the segment grew 115% and 296%, respectively. For the full year, management expects it to make up about 14% of the total $800 million in 2021 revenue.

That core growth coupled with ongoing COVID testing gives me confidence that Fulgent Genetics will grow to be a much larger business in the years ahead. That said, it is likely to come with significant volatility. There is always the possibility that COVID will disappear or that states where the company has a large testing presence will beat back the virus. With a price-to-earnings ratio of less than 5.0, I think shareholders are being compensated for the risk.