It's pricey today, but it has what it takes for a long run of strong growth.

It can be hard for casual investors to earn market-beating returns. Because the broad market has returned almost 10% a year over time, it often takes a well-diversified portfolio and lots of patience.

But one good way to tip the odds in your favor is to look for growing companies that have a strong moat, lots of cash, and effective management. Even if only one of your growth picks ends up becoming a massive winner, it can more than make up for a big decliner -- after all you can only lose the money you invest, but finding a great company early in its lifespan can earn you many times that amount. My choice for a young winner that can help you beat Wall Street is Upstart Holdings (UPST -2.54%). 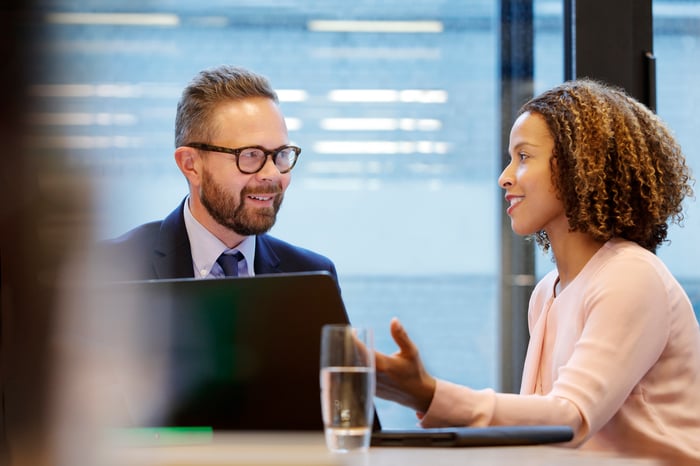 Becoming a key player in the banking industry

That's an attractive model, and the company has demonstrated enormous growth since it went public a year ago. Second-quarter revenue increased more than 1,000%, and loans originated increased more than 1,600%. But with revenue of just $194 million in the second quarter, there's still plenty of room to grow. Management expects revenue to increase between 215% and 230% in the third quarter.

And the company says that total U.S. consumer credit was $4.2 trillion for the 12-month period that ended in June, according to data from TransUnion. Responsible for just 0.01% of that, Upstart has a huge addressable market.

Right now Upstart works predominantly with smaller banks, since the large ones can create their own solutions. And a large portion of its loans are concentrated in two banks -- which on the one hand means it can skyrocket as new banks sign on, but on the other hand means there's some risk attached to relying on two partners. But Upstart is improving in this area: Cross River Bank accounted for 79% of loans in Q2 2020, but only 60% in Q2 2021 as Upstart expanded.

In the meantime, the company is already profitable, having turned a profit of $36 million after an $11 million loss in the second quarter of 2020. Another factor to consider is that Upstart caters to the banking industry, but it's not a bank itself, so it has less exposure to the risk that the banks take on. Some 97% of revenue comes from fees without any credit risk.

Upstart's newest product is Upstart Auto Retail, which it developed after acquiring Prodigy Software in April. The automotive industry is a $1 trillion market, with less than 1% of buyers satisfied with the process. Upstart is taking aim at this market, offering a better way to provide financing that approves more loans with less risk and makes for a better experience for dealers and buyers. It's already making progress: More than $1 billion worth of cars were purchased in the 2021 second quarter using the Upstart Auto Retail platform, which makes for a more transparent process for customers and higher profits for dealers.

This is another area where the company could post high growth for a long time. In Q2, Upstart expanded auto from 33 to 47 states, covering more than 95% of the U.S. population, which opens up a huge market to gain market share, and five bank partners signed onto the auto platform.

Upstart has already crushed the market in its limited time in the markets. At recent prices, shares have gained more than 1,000% since the stock's first-day closing price, while over the same time period the S&P 500 has gained just 17%.

But all that investor excitement has pushed the stock price up to a massive valuation of nearly 400 times trailing-12-month earnings. The company's phenomenal growth justifies an elevated valuation, but this definitely tops a reasonable premium. I still think Upstart is a great stock to hold, and it can continue to beat the market long-term. However, at this point investors should be prepared for some volatility as the company grows into its stock price.