All three of these telehealth companies are already profitable and have solid financials.

The pandemic gave a boost to a trend that was already growing -- telehealth. Before the pandemic, telehealth was often seen by companies as a convenient option to save money on insurance costs, but during the pandemic, it became a necessity. Going forward, consumers, having seen how easy telehealth services can be for prescription refills, mental wellness, and other areas, are going to expect telehealth options. 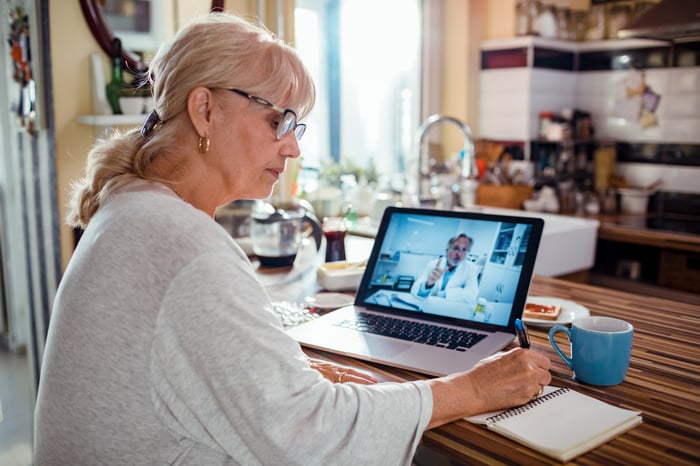 Humana is keeping telehealth as part of its overall focus

Humana stock is down slightly for the year, a little more than 1%. However, over the past five years, it has delivered a total return of more than 136%. It is known more for being an insurance company, but it has become heavily invested in telehealth.

Humana has been involved in several telehealth initiatives in the past two years, and in its first-quarter earnings call, CEO Bruce D. Broussard said the company sees digital health initiatives as a commodity. Instead of developing its own initiatives, he said it made more sense for Humana to often partner with another company.

In 2019, it began a seven-year deal with Doctor on Demand to establish On Hand, an online medical platform for Humana users. Last year, Humana made a $100 million investment in telehealth start-up, Heal, which focuses on home-based healthcare but also offers telemedicine, telepsychology, and digital monitoring health services. In February 2021, Humana teamed with Mercy to offer virtual care services for Humana's Medicare Advantage members. In June, it signed an agreement with League to extend that company's digital health and benefits platform to Humana Employer Group and specialty insurance members.

Doximity works the other side of telemedicine

Doximity may be the best telehealth stock you've never heard of -- unless you work in the medical field. It is a leading digital platform for medical professionals, and it claims more members than the American Medical Association. According to Doximity, it serves more than 80% of physicians in the U.S. as well as 50% of nurse practitioners, physicians assistants, and pharmacists.

The company has been a big part of telehealth services; its paid Doximity Dialer cloud-based platform grew by 24,000 physician licenses in the quarter, with 300,000 unique virtual visits in the quarter by physicians, nurse practitioners, and physician assistants, the company said in its first-quarter earnings call.

Think of Doximity as LinkedIn (which is owned by Microsoft) for medical professionals -- that's apt because Konstantin Guericke, the co-founder of LinkedIn, was an early member of Doximity's Advisory Board. Doximity allows medical students and health professionals to sign up for free with its revenue coming from subscription-based add-on services and mainly from advertising revenue. Pharmaceutical and hospital companies are willing to pay dearly for direct access to Doximity's subscribers.

According to Doximity CEO Jeff Tangney, the healthcare industry in the U.S. spent only 28% of its advertising dollars on digital efforts compared to the 63% spent on digital advertising by other industries. I like Doximity because it already controls such a dominant first-to-market share of the industry and has plenty of room to grow revenue streams.

CVS Health is growing virtually and in person

CVS stock is up more than 25% this year, and over the past five years has seen an 87% increase in cash flows from operations. CVS is better known for its pharmacies than as a telehealth provider, but it is a big player in the field, especially since its acquisition of Aetna in 2018.

The company offers video doctor's visits through its MinuteClinics in 35 states and the District of Columbia. It also has a network of telemedicine providers that provide services in D.C. and every state except for Idaho. The company also encourages online pharmaceutical orders. More importantly, unlike a pure-play telehealth company such as Teladoc Health, CVS has been profitable for a long time. In the second quarter, the company reported six-month revenue of $141.7 billion, up 7.3% year over year. It also reported net income through six months of $5 billion, up from $4.9 billion in the same period last year.

CVS has increased revenue for the past 10 consecutive years and boosted EPS in nine of the past 10 years. Based on its full-year forecast of $280.7 billion to $285.2 billion in revenue and $6.35 to $6.45 in EPS, it will likely increase both again this year. History alone is by no means a guarantee of future success, but in addition to the business's rosy outlook, CVS looks like a solid long-term pick.