General Dynamics is a blue-chip stock trading at an attractive price.

Sometimes you get what you pay for. Paying a little more to invest in a strong business generates better returns for its shareholders over time than paying a cheap valuation for a mediocre stock.

Defense and aerospace General Dynamics (GD 0.06%) is a world-class business trading at a fair valuation, making it a great defense stock investment idea for October. Let's peel back the layers of this onion.

Attached at the hip with the U.S. government

General Dynamics primarily develops and sells products and services to the U.S. government, private companies, and non-U.S. government clients. Its business breaks down into four segments: 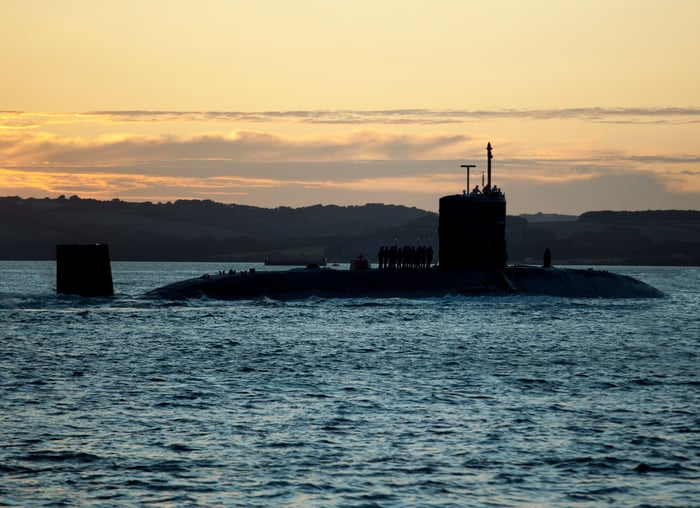 General Dynamics will do an estimated $39 billion in revenue this year, and about 70% of that will be with the U.S. government, the company's largest customer. The Department of Defense is the major customer, buying weapons systems, ships, submarines, tanks, information systems, and more.

Shareholders have enjoyed this stable relationship with the U.S. government that goes back to when General Dynamics was incorporated in 1952. This has made the company a great dividend payer, increasing its payout each of the past 30 years, making it a Dividend Aristocrat.

Let's be clear; General Dynamics is not a growth stock. Revenue has grown just 1.6% per year over the past decade, and earnings per share have increased 5% annually. When combined with a 2% to 3% dividend yield, this is just enough to muster 7% to 8% total returns each year.

Investors won't get rich overnight, but a long-term investor that steadily reinvests those dividends can build wealth over time. Additionally, I think that General Dynamics could grow even more over the decade to come.

A few potential catalysts could propel General Dynamics to a higher rate of growth in the years ahead. First, the "size of the pie" that is the Department of Defense's budget continually grows. President Joe Biden is seeking a 2% bump in spending for the 2022 budget. While the military's spending can fluctuate with wars and recessions, it has trended higher over the long term, nearly doubling over the past 20 years.

Additionally, General Dynamics' backlog has begun to grow in recent years, which is the total value of its booked business, contracts that often run multiple years. The company had a backlog of $69.2 billion in the first quarter of 2019, which has increased to $89.2 billion as of the second quarter of 2021. The backlog is a general indicator of the forward-looking growth of the business, so an increasing backlog could be signaling future growth.

Lastly, the company has opportunities to grow its business outside of the military. Its aviation segment, which includes Gulfstream jet aircraft, reported its highest backlog since 2015 in Q2 of 2021 . While the pandemic has put a dent in business across the aerospace industry, the rebound in demand could boost growth in the years ahead. General Dynamics also does less than $1 billion each year in foreign military sales and 30% of its revenue in the private sector. These all have room to expand.

Investors don't need a dramatic uptick in growth from the company; even an increase to annual revenue growth of 3% to 4% might be enough to increase total returns to the low double digits.

Trading at a fair price

If we look at analyst estimates, General Dynamics should earn about $11.51 per share for the full 2021 year, which values the stock at a price-to-earnings ratio of 17.5, a slight premium to the stock's 10-year historical average P/E ratio of 16.

This isn't to say that the stock is "cheap", but compared to an overall expensive market, General Dynamics seems to be trading at a fair price when you consider its quality fundamentals. If we look at the reliable dividend and the nearly certain revenue streams that come with doing 70% of your business with the United States government, the business might be growing just enough that the reliability of the business should be reflected in its valuation.

Investors will want to monitor the company's future quarters to see if revenue growth can pick up just a bit, but the high quality of General Dynamics makes it at least worth a strong look at its current valuation.