Just days after announcing that Hasbro (NASDAQ:HAS) CEO Brian Goldner was taking a medical leave, the company on Tuesday announced his death. Goldner had been undergoing medical care following cancer treatment in 2014.

Goldner was recognized as a visionary in the industry, and especially at Hasbro. While his passing means that Hasbro will be undergoing a transition in leadership -- previous lead independent director Rich Stoddard is serving as interim CEO -- Goldner's moves in recent years have the company heading toward a bright future.

Hasbro is currently executing its brand blueprint strategy, where the 2019 acquisition of Entertainment One (eOne) will play an important role. Despite promising growth initiatives underway to unlock more value across Hasbro's brands, the stock price is down about 10% over the last few months and offers an attractive dividend yield of 3.1%. Here's why Hasbro is still a great investment at these levels. 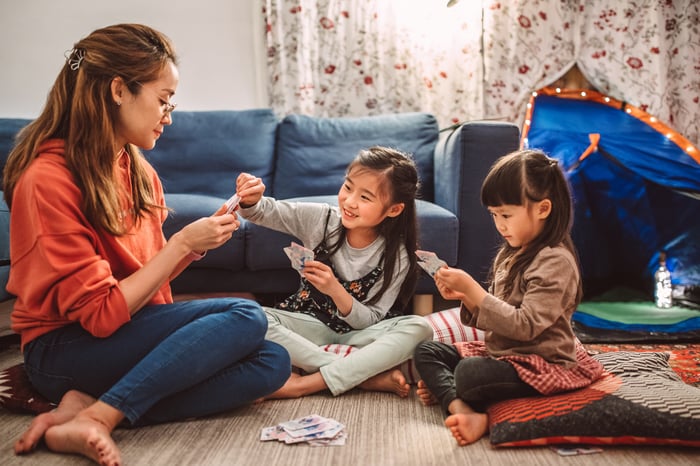 Hasbro knows that consumers tend to follow brands across different media, so management is more aggressively expanding its toy properties across channels, including digital games, licensing, esports, and feature films.

eOne significantly expanded Hasbro's television production and distribution capabilities, and it has already taken over the lead role for Hasbro's entertainment projects. This has enabled Hasbro to develop, own, and distribute its content across different platforms worldwide, which could pay huge dividends. It currently has more than 30 feature films in development, including films based on brands like Dungeons and Dragons, G.I. Joe, My Little Pony, Transformers, and Magic: The Gathering.

Basically, Hasbro is trying to repeat the success of the Transformers films across the rest of its brands. If successful, it could have a significant impact on Hasbro's revenue growth. Here's how Goldner explained the rationale at the recent Goldman Sachs Communacopia conference last month: "[A]s you think about where we were back in 2006 and 2007, and you think about a Transformers, prior to the first film was, let's call it, 1x of value to Hasbro. By the time we got through the first film window in 2007, that brand was worth 5x."

He also referenced what the company did with My Little Pony in the early 2000s. After the brand was "redeveloped and reimagined," as Goldner described it, My Little Pony's value grew two to three times.

Management clearly has a vision of where it wants to take Hasbro, as Goldner alluded to with this statement: "You can see how, by activating a number of brands that haven't benefited from bespoke entertainment yet or had benefited from bespoke entertainment years ago in the '80s or '90s, and now we're going to bring that brand back out of the vault, but owned by Hasbro. It gives us the opportunity to drive more Hasbro revenues."

By investing in its own intellectual property, as opposed to leaning on Walt Disney to sell more Baby Yoda toys, Hasbro should unlock more growth in profits and fuel a higher stock price.

Revenue from partner brands made up 16% of Hasbro's total revenue through the first half of 2021. But Hasbro's company-average operating profit margin has hovered around the mid-teens range, while its own toy brands command an operating margin above 20%.

Interest in top toys is growing

There is a steady pipeline of projects on the way, including the new My Little Pony film scheduled for release in 2022. A few more will follow in 2023, and it will grow from there.

Mattel is also undergoing a similar transformation right now, with multiple film projects in the works for Barbie and Hot Wheels. Lego is on offense, too. The pandemic seems to have renewed interest in classic toy brands, so the timing of Hasbro's initiatives is right on the mark.

While both companies have good relationships with Walt Disney and other brands in licensing toys, doubling down on their own brands diminishes that dependence and maximizes profitability. Hasbro's strategy should lead to more earnings growth, and that's why the stock remains a compelling value right now, with the shares trading at a modest price-to-earnings ratio of 18.5 based on 2021 earnings estimates.