National Football League viewership is the highest it's been since 2012.

Walt Disney (DIS -0.15%) shareholders will be happy to hear good news about their investment. The House of Mouse has been hard at work rebounding from the devastating effects of the coronavirus pandemic that left many of its businesses temporarily closed to the public.

Thankfully, nearly all its operations have been reopened, and the recovery is progressing quickly. One more piece of good news reported by The Wall Street Journal on Friday, Oct. 8, was that viewership of National Football League (NFL) games is at the highest it has been in several years. Here's why that matters to Disney. 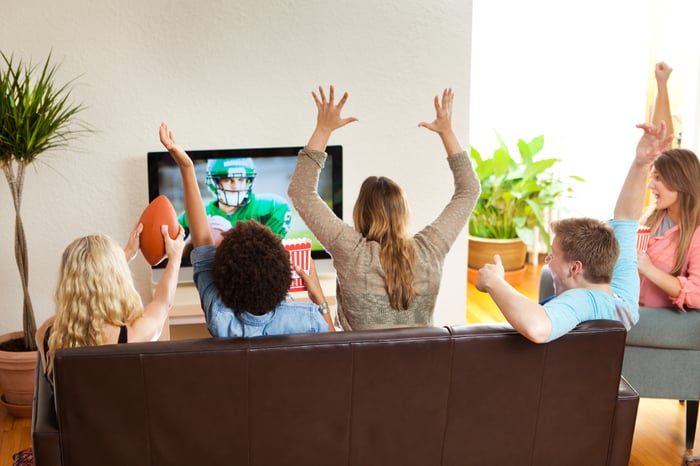 Although Disney is well-known for its theme parks, blockbuster films -- and lately, Disney+ -- its cable channels get less attention. However, the part of the business that includes cable channels -- the media segment -- is a significant contributor to revenue and profits. In fiscal 2019, before the pandemic disrupted so much of its operations, Disney's media segment generated $24.8 billion in revenue and $7.5 billion in operating profits.

The next best segment for Disney in 2019 was the one that includes theme parks -- and that brought in revenue of $26 billion and operating profits of $6.7 billion. Impressively, Disney is sustaining revenue and profits in the media segment despite the ongoing viewer trend to cancel cable subscriptions and switch to streaming services.

On that front, the news of increasing viewership of NFL games will be music to Disney stockholders. According to the Wall Street Journal, four weeks into the NFL season, viewership is at its highest level in six years. For Disney's ESPN cable channel specifically, Monday Night Football viewership is up 24% from last year and 26% from 2019.

Media executives attribute the boost to the return of fans to stadiums as well as closely contested games. Screaming and cheering fans can certainly make a game more fun to watch. And more fans watching games on TV means Disney can generate more revenue from advertisers.

Disney is hoping this trend sustains for the rest of the season and beyond. The company is betting on it -- becoming one of just several media companies to secure long-term deals with the NFL for broadcasting rights to its games worth billions of dollars.

The resilience of the cable business has been crucial for Disney during the pandemic. With so many of its businesses closed to the public, the cable segment has been a saving grace. In the nine months ended July 3, it generated an operating income of $6.8 billion, more than the entirety of the rest of its operations because of pandemic-related disruptions.

The segment will not have to do all of the heavy lifting much longer. Disney's theme parks are all reopened and are getting stronger every quarter. Meanwhile, three of its movies have eclipsed more than $300 million in box-office sales. And as the world recovers from COVID-19, Disney's other businesses will play a more prominent role. Over the longer term, the streaming services (Disney+, Hulu, ESPN+) could even overtake the cable segment.

For now, it's good news that NFL viewership is increasing, and that will help ESPN's contribution to Disney's cable segment as well as the company overall.