One of the few publicly traded wine companies, The Duckhorn Portfolio (NYSE:NAPA) is just seven months out from its March IPO. It served up a tasty vintage of revenue and earnings gains with its early October fourth-quarter and full-year fiscal 2021 report, winning a stock market boost from pleased investors. However, the market registered a strongly negative response to its announced sale of 12 million shares of stock just a week later, slashing value more than 6% in a few hours. This raises the question of how sustainable its current value is -- with important metrics likely supporting a bullish thesis in spite of temporary investor negativity.

When Duckhorn popped the cork on its Q4 earnings on Oct. 4, it came in well ahead of analyst consensus expectations. The results delivered positive surprises at both the top and bottom lines. Its $70.89 million in revenue beat Wall Street's expectations by 17.8%, while its adjusted earnings per share of $0.08 exceeded the average forecast by 300%. 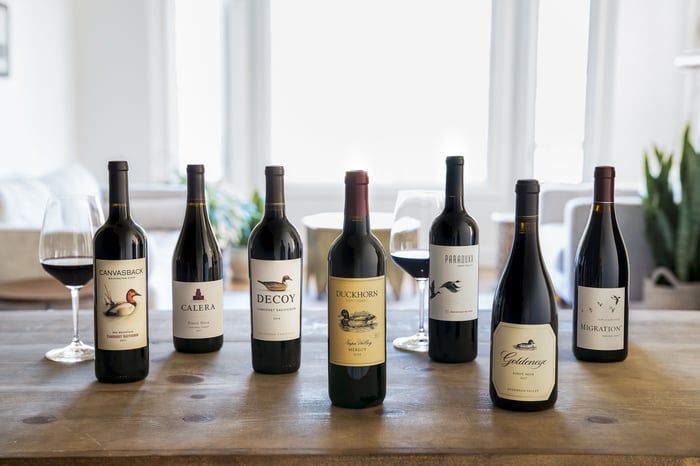 The vintner is guiding for $353 million to $360 million in fiscal 2022 revenue, and adjusted EPS of $0.54 to $0.57. Revenue is ahead of fiscal 2021's $336.6 million, while EPS is slightly below the past year's $0.58. However, the press release notes EPS is affected by the increased costs of operating a public company. If those costs had been present throughout fiscal 2021 its adjusted EPS would have been $0.52 instead.

Therefore, the 2022 guidance is equivalent to 3.9% to 9.6% earnings gains over 2021 if adjusted for public company expenses. This means the guidance is calling for effective growth of up to approximately 7% in revenue and almost 10% in earnings year over year, showing The Duckhorn Portfolio expects to maintain positive momentum through July 31, 2022.

On Oct. 12, when Duckhorn announced an upcoming stock sale through a prospectus with the Securities and Exchange Commission, its stock traded modestly upward during regular stock market hours. After a 1.49% rise, however, its shares plunged in after-hours trading. By 7 p.m. EDT, its share price had sunk 6.34%. The company has been trading consistently above its $15 offering price since its IPO, sometimes as high as $25, but came close to falling under $20 on news of the sale. Early trading the following day confirmed the loss of value.

The 12 million shares involved in the sale are being sold by existing shareholders rather than Duckhorn Portfolio itself. Another 1.8 million shares could potentially be involved if the underwriters exercise their option to sell additional stock. The company will receive zero proceeds from the sale, though it will bear the costs. Investors are reacting because the sale of shares, following the expiration of the Sept. 14 lockup date following Duckhorn's IPO, will increase the float, or pool of shares available for trading.

On the plus side, the main sale will not actually dilute the company's shares overall, despite its increase of the company's float. Additionally, since Duckhorn isn't the seller, the offering doesn't sound alarm bells about it suddenly needing additional cash for an unforeseen expense or a recklessly large acquisition. While Ryan remarked how "executing on accretive M&A opportunities adds an additional element of growth for us" during the Q4 earnings conference call, he also added the company's approach to mergers and acquisitions is "disciplined." The company is unlikely to dilute its stock merely to complete an acquisition.

The offering could cause shares to trade closer to $20 than $25 for some time. However, it doesn't fundamentally change Duckhorn's positive metrics or its trend of growth. Investors should also consider the vintner is positioned in one of the growth areas of the liquor market with its focus on bottling and selling higher-end wines. Its brands, including many labels with a duck theme such as Goldeneye, Migration, Greenwing, Canvasback, Decoy, and Paraduxx, are sold in 50 states and over 50 countries, and range from $20 to $200 per bottle, according to the company.

Aiming at the high-end liquor market has been a successful recent strategy for beer and wine company Constellation Brands (NYSE:STZ). While focused mostly on beers and hard seltzer, Constellation has been turning to sales of premium brands as sales of budget beer, wine, and spirits continue a years-long slump. Constellation's Sept. 8 conference presentation, in fact, cited data supporting a high-end liquor strategy.

The Duckhorn Portfolio naturally falls into this growing sector of the alcohol market, lending support to the idea it will continue to grow, even if the common stock offering depresses share price for some time. This rare winemaker among beverage stocks still looks positive, and is worth consideration as an investment by investors interested in the sector, with its growth and value likely to take wing in the medium to longer term.