The path to profitability still looks hazy for this marijuana company.

Depsite its dreadful performance over the last two years, investors may still hold out a smudge of hope that things will turn around for Canada-based marijuana producer Aurora Cannabis (ACB 4.81%).

After all, a cursory glance at its historical stock prices indicates that Aurora did make some investors wealthy in the past. Since it started selling medical cannabis in the first quarter of 2016, Aurora's share price rose by as much as 2,400% through early 2018. 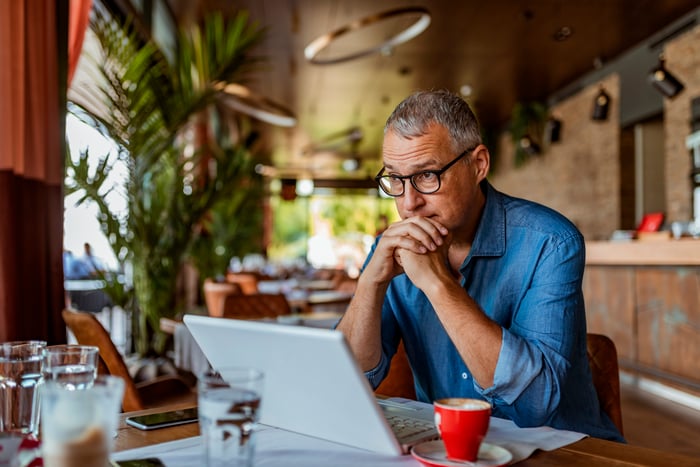 But those good times were short-lived -- due in part to the company's own reckless spending, and partly due to external headwinds. Aurora's shares tanked in January 2018, and its subsequent sharp surges back toward those heights were followed by even sharper declines.

Over the past year, it made some notable cost-cutting attempts under new CEO Miguel Martin, who took over the reins in September 2020. So far, things haven't gotten rosier for the pot producer. However, does the latest quarterly report suggest that the company is at least on the path to regaining investors' trust?

Falling revenue is not a good look

Aurora's disastrous performances up until now could primarily be blamed on its failure to grow its revenue, and that hasn't changed in the fourth quarter of fiscal 2021, which ended on June 30. Total revenue, in fact, declined 20% year over year to 54 million Canadian dollars. For its full fiscal 2021, total revenue fell 9% to CA$245 million versus the previous year.

However, its early mover status in the medical cannabis segment has proved slightly advantageous for Aurora. For its full fiscal 2021, Canadian medical cannabis revenue came in at CA$107 million .

For the same period, peer Canopy Growth's medical cannabis revenue came in at just CA$55 million. That said, the latter has an upper hand competing in the recreational market, mostly because of its ongoing strength in the derivatives segment.

According to a research report by Deloitte, Canada's cannabis derivatives market could be worth in excess of CA$2 billion annually. This means, Aurora has a lot of catching up to do.

Aurora regularly issued new stock in order to raise capital. As a result, the company has a stable cash balance of $441 million. The flip side, however, is that this has resulted in excessive share dilution -- something that doesn't sit too well with investors.

At the same time, a failure to control expenses coupled with declining revenue over the last 10 quarters have left Aurora far from profitability. It has repeatedly failed to meet its earnings before interest, tax, depreciation, and amortization (EBITDA) targets, but that hasn't stopped management from making promises. In the company's latest earnings call, management again made assurances that at current revenue levels, it is on the path to achieving positive EBITDA with the help of cost-cutting strategies that will save it around $60 million to $80 million annually.

Management says it expects this to happen in the first half of the fiscal year 2022 -- in other words, by December of this year. But I think that it's a bold assumption that EBITDA will inflect to the positive even if revenue levels remain at its fiscal Q4 levels. That said, the company has managed to trim its EBITDA loss to CA$19 million from CA$33 million from last year's fourth quarter.

A deep-pocketed partner would be a big help

Keeping costs down and launching new products would have been easier if -- like most of its peers -- Aurora had a strong partner to help it with the financial heavy lifting. U.S. tobacco company Altria Group holds a stake in Cronos, while U.S. beverage giant Constellation Brands has a large investment in Canopy. The lack of a large and stable partner is also restricting Aurora's growth, not only in Canada but also internationally. Making headway in the U.S., a burgeoning cannabis market, now seems like a long shot for Aurora.

Aurora's fiscal fourth-quarter results did not offer investors any clear indications that better days are ahead. Declining revenues, failure to achieve positive EBITDA, and consistent heavy share price dilution via secondary stock offerings just aren't signs that it's on the path to recovery. I would advise investors to steer clear of this pot stock until the company shows some worthwhile growth numbers. Meanwhile, investors interested in this space should look at profitable U.S. cannabis stocks instead.