Some companies that are leaders in gene editing get a lot of attention. CRISPR Therapeutics (NASDAQ:CRSP) and Intellia Therapeutics (NASDAQ:NTLA) especially stand out. Both have already reported promising data from early stage clinical studies evaluating their respective gene-editing therapies.

But there are also other biotechs that are making key advances in gene editing. While most of them not as widely followed as CRISPR Therapeutics and Intellia, they're worth watching. Here are two top gene-editing stocks to have on your radar right now. 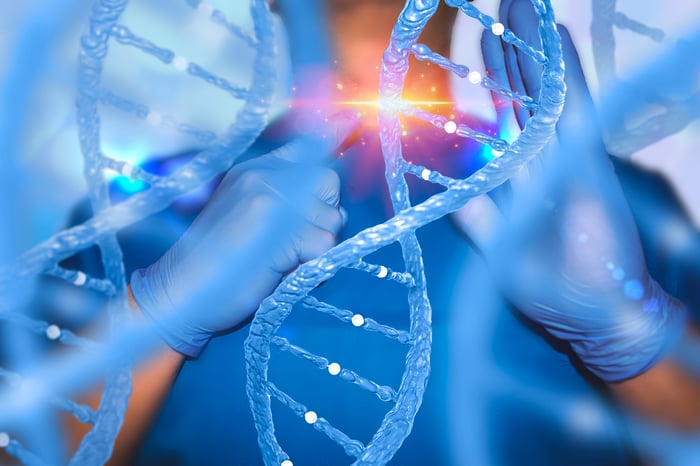 At least one prominent investor is a big fan of Beam Therapeutics (NASDAQ:BEAM). Cathie Wood's ARK Genomic Revolution ETF and ARK Innovation ETF have been scooping up shares of the biotech stock.

This approach is called base editing. And it could be more powerful than any other type of gene editing. Where CRISPR can be compared to scissors that cut DNA, base editing is like a pencil and eraser that can rewrite a specific letter in the genome.

Beam doesn't have any candidates in clinical testing yet. The company does, though, plan to soon file an Investigational New Drug (IND) application with the U.S. Food and Drug Administration (FDA) to advance BEAM-101 into clinical studies targeting rare blood diseases beta-thalassemia and sickle cell disease.

Another candidate, BEAM-201, is currently in preclinical testing that could set the stage for an IND application. BEAM-201 is a cell therapy targeting acute lymphoblastic leukemia. Beam's pipeline also includes several other preclinical programs focused on using base editing to treat sickle cell disease, acute myeloid leukemia, and other rare genetic diseases.

The company's market cap already tops $6 billion. That arguably makes Beam one of the most overvalued biotech stocks on the market. However, it also underscores how much investors prize the potential for Beam's base editing technology. If the company's initial pipeline programs are successful, Beam should have plenty of room to run.

Verve Therapeutics (NASDAQ:VERV) is another biotech that uses base editing. The company's approach is to package messenger RNA (mRNA) with guide RNA into a lipid nanoparticle. Once delivered into the body, the therapy precisely edits a single "spelling change" in the genetic code.

One key differentiating factor for Verve is that it focuses only on cardiovascular disease. The company's pipeline doesn't include any candidates targeting other rare genetic diseases or cancer as most other gene-editing biotechs do.

Like Beam, Verve is owned by the ARK Genomic Innovation ETF. However, the size of the ETF's position is quite smaller than its stake in Beam Therapeutics.

The stock isn't cheap. Verve sports a market cap of more than $2 billion even though the possibility of launching a product is well into the future. As is the case with Beam, though, if Verve's gene-editing approach is successful the stock will skyrocket.