For most people, the decision to buy or sell a house is a significant milestone, representing one of the largest transactions they will make in their lifetime. Unfortunately, these transactions tend to be time-consuming and complicated, as they often involve a intricate mess of third-party brokers, inspectors, lenders, and lawyers.

Put simply, the residential real estate industry is due for disruption, and Truist Securities thinks Redfin (NASDAQ:RDFN) is on the right path to do it. Analysts at this investment bank currently peg Redfin's value at $102 per share, implying 98% upside in the near term.

With that in mind, let's take a closer look at this disruptive company. 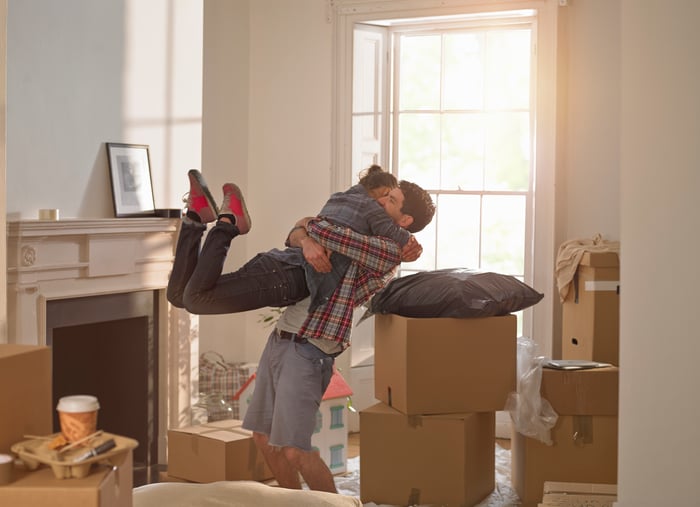 Redfin is a tech-powered real estate business. Its platform aims to be a comprehensive solution for homebuyers and sellers, including brokerage, mortgage, and closing services. The company also buys homes directly through RedfinNow, giving sellers the assurance of an all-cash offer while eliminating the hassles of repair work and open houses. In short, Redfin streamlines real estate transactions, removing many third parties from the equation.

Roughly six million existing homes will be sold in the U.S. this year, according to the National Association of Realtors. Assuming an average selling price of $376,000 (i.e., the average in August) and a 5% commission fee, that puts Redfin's annual market opportunity at over $112 billion.

Currently, the residential real estate market is highly fragmented with over 130,000 brokerages in the U.S. alone. But Redfin has an advantage: Its end-to-end platform simplifies the process of buying or selling a home, and that has led to traction with consumers. In fact, Redfin ranks as the third-most popular real estate website in the U.S. and the fourth-most popular worldwide.

To reinforce this advantage, Redfin acquired RentPath in February, entering the rental home and apartment market. By late 2022, management plans to make RentPath's listings available through the Redfin website, a move that should drive more traffic to its platform.

Finally, Redfin has reimagined the real estate business model. The company treats its agents as employees instead of independent contractors, meaning they earn salaries rather than working for commissions. This allows Redfin to charge home sellers a lower commission -- typically 1% to 1.5%, versus the industry average of 2.5% to 3% -- while also refunding buyers a portion of their commission. In total, management believes this strategy has created over $1 billion in savings for consumers -- that's a powerful value proposition.

The housing market has cooled off slightly, but in August, the average price of U.S. existing homes was still 10% higher than it was last year, and available inventory was still 13% lower. In both cases, those figures suggest strong demand, and that has been a powerful tailwind for Redfin.

During the most recent quarter, website and mobile app traffic hit 48.4 million monthly visitors, up 14% year over year. And Redfin's market share reached 1.18%, up from 0.94% in the prior-year period. The company also sold 292 RedfinNow homes, and its home-buying business posted a positive gross profit, an encouraging improvement.

Taking a step back, Redfin's top-line performance has been solid over the last three years, and while the company is still not profitable on a GAAP basis, net income is heading in the right direction.

Specifically, the company has launched RedfinNow in 11 new markets so far this year, bringing the total to 29. It also introduced Direct Access in October, allowing homebuyers to self-tour vacant Redfin homes (with or without an agent). Currently, this service is available in 22 markets, but management plans to expand Direct Access across the U.S in the future. In both cases, these moves create more convenience and value for consumers, and that should translate into more business for the company.

Like Truist Securities, I see significant upside for Redfin shareholders -- that's why this stock looks like a no-brainer.