In mid-September, a splashy pro wrestling pay-per-view event won rave reviews from nearly every observer who covered it. The 10,000-plus audience members booed more vociferously and cheered louder than in many classic live wrestling shows with much larger crowds.

The problem for the only publicly traded wrestling company on the scene, World Wrestling Entertainment (NYSE:WWE), is that it wasn't a WWE event. 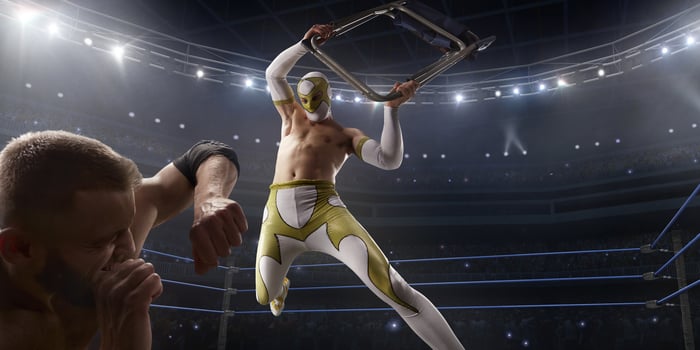 The September spectacular was All Out, a pay-per-view event from WWE's archrival, All Elite Wrestling (AEW). A company less than three years old with a big budget and much still to prove, AEW has been doing a good job of stealing WWE's thunder lately.

All Out's crowd -- which several wrestling media sources pegged at 10,126 -- was small by the standards of WWE. Nevertheless, the audience was all-in on the action, energetically honoring "kayfabe" (i.e., pro wrestling's tradition of presenting the staged aspects of its business as real), cheering and booing the performers with a passion and commitment WWE has displayed rarely, if ever.

Smart booking and marquee talent helped. The evening was highlighted by the in-ring return of CM Punk, who left the WWE in 2014 and never looked back.

Generally speaking, All Out was a solid night of entertainment packed with all the elements that have made for the most successful wrestling events in history.

As a result, there are wrestling fans who now consider AEW to be the purveyor of "sports entertainment" (to cop WWE's famous descriptor of the business). Like WWE, the upstart has a pair of prime-time TV shows on a top network, media giant Time Warner's TNT, and beams out pay-per-view extravaganzas on a semi-regular basis.

As a wrestling fan, I'm happy AEW is popular and is juicing overall competition. But as a WWE shareholder, I'm concerned about my investment. Let's take a look at some WWE numbers to see whether I and fellow investors should bail on the stock under this threat (AEW isn't publicly traded and does not divulge its finances).

In Q2 2021, WWE's total revenue was nearly $266 million, against the $269 million of the 2019 quarter -- basically a wash. This was despite the fact that live events for the former only brought it a bit over $9 million versus the almost $49 million of Q2 2019. Almost needless to say, the higher number in the latter period is due to a vastly higher number of live shows in the pre-pandemic times.

Let's turn to the company's single largest source of revenue, one that actually did well during the shut-in times of the coronavirus outbreak: media (basically, TV). All told, this amounted to just under $234 million in the 2021 quarter, 19% higher than the two-years-ago result of $197 million.

Perhaps a better metric is TV ratings, since that of course is the key medium for the business. According to veteran wrestling pundit Dave Meltzer from Wrestling Observer, the two respective weekly anchor shows, WWE's Raw and AEW's Dynamite, have boasted more or less even viewership in recent weeks.

Both have grown their audiences, with Raw inching up a bit over 2% in August among the crucial age 18 to 49 demographic. Dynamite surged by nearly 28%, but Meltzer believes this was due largely to CM Punk making his first appearances. Novelty generally plays a big part here, as Dynamite is a relatively new offering for a TV audience while Raw has been on the air continuously since 1993.

So at the very least, it seems WWE is holding out well against AEW. Its media arm is durably strong, thanks in no small part to the over $1 billion, five-year broadcast deal it signed in 2018 to air its second TV show, Smackdown, on big-time terrestrial channel Fox.

Meanwhile, the AEW crowds might be more lively, but WWE still has an army of adherents -- according to the company, the two nights of its 2021 edition of WrestleMania drew anywhere from 18,000 and change to nearly 26,000 attendees apiece (depending on which information source you believe). Not bad considering the coronavirus was still on the loose, keeping many wrestling fans at home.

WWE does, of course, have to keep on its toes. The increasingly well-stacked and veteran-rich roster of AEW will make Dynamite and its sibling show Rampage more competitive, if anything. Comfortingly, the incumbent is clearly responding to this, shifting marquee matches from pay-per-views to "regular" TV and scripting more dramatic storyline developments on those shows.

So yes, WWE investors should be concerned about the emergence and popularity of AEW, and keep a wary eye on how the rivalry develops. But I don't think AEW's rise is reason enough to sell WWE stock. The company to me still looks like a winner, even if the current showdown with AEW has delivered a few heavy blows.