Now's the time to add these fundamentally strong growth stocks to your portfolio.

The U.S. stock market has had a choppy ride in early October. Investors are concerned about rising inflation and third-quarter corporate earnings performance. While the short-term volatility is concerning, there are still several fundamentally strong growth stocks riding secular tailwinds that have the potential to build significant wealth for long-term investors. 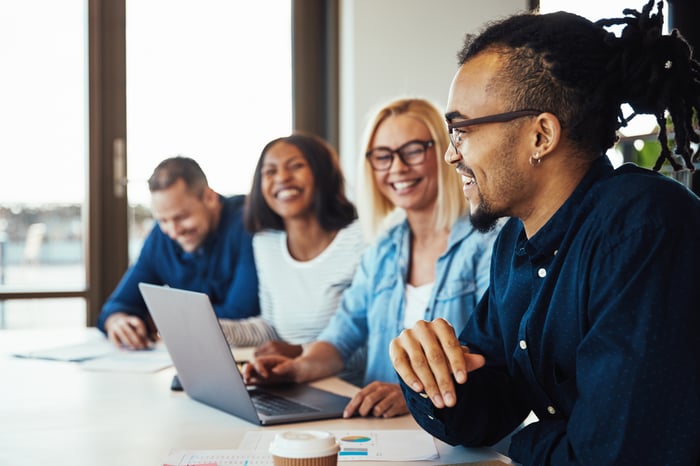 Not long ago, it would have been unfathomable for banks to have a robust forward-looking alternative to the traditional backward-looking FICO credit score for evaluating a borrower's creditworthiness. However, Upstart Holdings has made this possible. By leveraging the power of several cutting-edge technologies, including artificial intelligence, machine learning, predictive modeling, and big data, Upstart can track over 1,600 data variables across millions of transactions to determine a person's creditworthiness.

Upstart claims that its lending platform results in 75% fewer loan defaults when compared to traditional bank risk models at the same credit approval rates. This enables its partner banks to approve more loans, resulting in improved customer satisfaction while lowering its loss rates. The success of the company is apparent considering that 25 banks and credit unions were on the Upstart platform at end of the second quarter (ending June 30), more than double the number at the end of September 2020.

In the second quarter, Upstart's revenue was up 1,018% year over year to $194 million, while adjusted EBITDA jumped from a loss of $3.1 million in the same quarter of the prior year to a profit of $59.5 million. The company is guiding for $750 million in revenue for fiscal 2021, a year-over-year jump of 211%. Although not yet profitable, analysts expect the company to post adjusted earnings per share (EPS) of $1.33 in fiscal 2021.

Upstart's share prices have surged by about 821% so far this year. While mostly focused on personal loans, Upstart has now started branching into the auto refinance market -- supposedly the next big opportunity for the company. With more financial institutions rapidly adopting the company's platform and Upstart entering new markets, the company is well poised for a solid long-term growth trajectory.

Zillow Group is best known as the company behind several popular real estate websites and mobile applications, such as Zillow, HotPads, Trulia, and StreetEasy. In the second quarter (ending June 30), there were 2.8 billion visits to the company's internet properties.

Zillow offers advertising, marketing, and a technology platform to real estate agents, brokers, and other real estate players through its internet, media, and technology (IMT) segment. IMT is the only profitable business, with an adjusted EBITDA margin of 46%. Not resting on its laurels, the company has also branched out into direct buying and selling of houses, or iBuying, through its homes segment and offers home loans through its mortgages segment.

Zillow Homes has emerged as a key competitive advantage for the company and accounted for 59% of second-quarter revenue. This business reported a 70% year-over-year jump in revenue to $777.1 billion in the second quarter. Zillow Homes will continue to disrupt the real-estate iBuying space as it provides a frictionless.

Zillow has not remained immune to the labor and supply constraints that have plagued the overall U.S. economy. This has led to operational backlogs in construction, renovations, and closings of real estate spaces. Subsequently, the company now plans to stop purchasing new U.S. houses for its iBuying business for the rest of 2021. While the news seems to have spooked investors, this will most likely only affect the company's topline on a short run basis.

Zillow reported losses in 2020, but analysts expect its adjusted EPS to be $1.14 in 2021. With the iBuying business (which is still loss-making) expected to slow down in the remaining months of 2021, the probability of Zillow now surpassing these estimates remains high. Hence, considering the company's brand power, robust revenue momentum, and expected return to profitability, shares are well-positioned to go much higher in the coming months.

Database systems specialist MongoDB's share price is up by about 36% so far this year -- and for several good reasons.

MongoDB's database-as-a-service offering, Atlas, has been a major beneficiary of the pandemic-accelerated shift of enterprises to hybrid cloud infrastructure (a mix of on-premise and public cloud). The company's on-premise database server coupled with Atlas provides seamless migration of data to the cloud, without rewriting any application code. The company's freemium pricing strategy (core software is open source, while new additions are paid) and developer-centric approach have played a big role in enterprise adoption of its products.

Atlas currently accounts for 56% of MongoDB's total revenue. Atlas' revenue jumped 83% year over year in the second quarter, much faster than the 44% year-over-year jump in the company's overall revenue. A shift in revenue mix toward the higher-margin database-as-a-service offering implies improving profitability as well as higher revenue visibility for the company in the coming years.

MongoDB is not yet profitable but is slowly reducing its losses. Against the backdrop of a solid business strategy and rapidly improving financials, there's lots of room for the company's share prices to rise in the coming months.

Nasdaq Bear Market: 3 Innovative Growth Stocks That Can Quadruple Your Money by 2033
413%