Your returns would have been great until recently.

Vertex Pharmaceuticals (VRTX -0.46%) is one of the largest biopharma businesses in the world, but you've probably never heard of anyone taking the medications that it makes. That's because it focuses on ones that treat rare diseases. Yet it has a market cap of $47 billion. I'm consistently surprised that it's possible to become so big and profitable by targeting conditions that affect few people worldwide.

But its stock hasn't always lived up to shareholders' hopes. In the past year, its shares have fallen by about 17%. Did the investors of yesteryear make a mistake or is this just a dent in an otherwise stellar run? 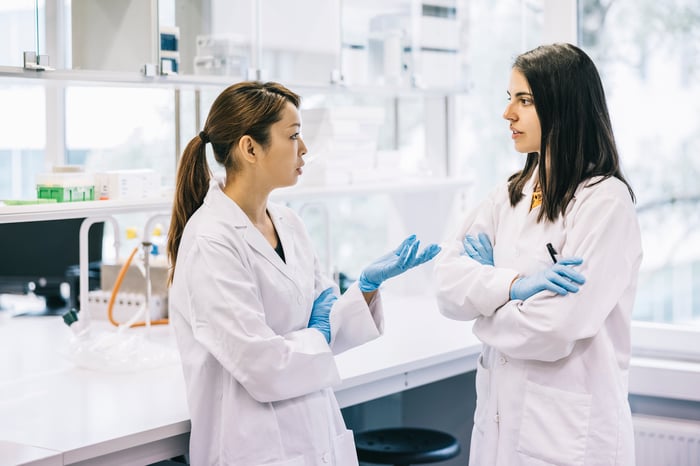 Rare diseases can be lucrative targets

Right now, Vertex has four drugs that are approved for sale, all of which are combinations of molecules it developed to treat cystic fibrosis (CF). Over the past five years, Vertex's quarterly revenue has grown by 291% from sales of those drugs.

Given all of its concentrated scientific talent and technical know-how about cystic fibrosis, the company can likely continue to expand at a moderate rate by increasing its penetration of the market for CF therapies. Vertex's drugs currently treat an estimated 50% of the known people with cystic fibrosis -- and as it has no direct competitors, there's little reason why it won't be able to achieve its goal of eventually treating 90% of the patient population.

To accomplish that, it'll need to keep testing its therapies in new combinations and with new sub-populations of patients to pave the way for expanding the indications of its already-approved drugs into new demographics, which is exactly what it has been doing for some time.

The challenge of maintaining its pace of growth

But past performance doesn't guarantee future returns, and Vertex's attempts to diversify beyond CF are certainly a wild card for the stock.

Aside from the CF drugs on the market, Vertex's most advanced project is in phase 3 of clinical trials -- and it's another therapy for CF. The company does also have a pain relief treatment and a treatment for APOL1-mediated kidney diseases in phase 2 as well as a pair of collaborations with CRISPR Therapeutics in early clinical trials. As promising as they may be, all of these programs will take years to bear revenue -- if they ever do.

At the same time, Vertex is still reeling from a couple of pipeline losses that won't be easy to replace anytime soon. In October of last year, the company announced that it was discontinuing one of its two programs aimed at treating alpha-1 antitrypsin deficiency (AATD) as a result of poor phase 2 clinical data. That caused its stock to take a heavy hit as the projected future revenue from the program became $0 overnight.

Then, in June of this year, the company called off the second AATD program, precipitating another blow that drove the stock's performance beneath that of the wider market for the five-year period. For now, it's back to the drawing board when it comes to medicines for AATD. 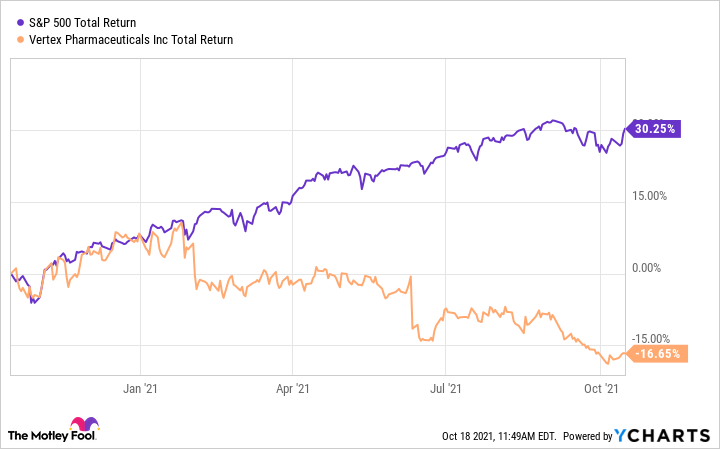 There's no need to be afraid of missing out

These clinical setbacks are a healthy reminder of the bumpy ride biopharma stocks can take.  For the moment, your initial investment of $5,000 would have returned slightly more if you'd simply invested in an index fund tracking the market.

Nonetheless, I think that the company will likely succeed in its ongoing and future attempts to diversify its roster of medicines. If its track record with cystic fibrosis is any indication, Vertex knows how to develop drugs, and that's what counts.