The stock market is giving incredibly high valuations to electric vehicle stocks, whether the companies have proven themselves effective manufacturers or not. Tesla (NASDAQ:TSLA) is one of the most valuable companies in the world, while start-ups like Lucid Motors (NASDAQ:LCID), NIO (NYSE:NIO), and Xpeng (NYSE:XPEV) are worth tens of billions of dollars with very little production, and a company like Rivian is eyeing a potential $80 billion valuation in an IPO.

Meanwhile, older manufacturers like General Motors (NYSE:GM), Ford (NYSE:GM), Toyota (NYSE:TM), Honda (NYSE:HMC), and Volkswagen are trading for less than the market's price-to-earnings ratio, as you can see below, indicating that investors don't think highly of their earnings growth potential. Is this because EV companies are disrupting the old guard or because EV stocks are overvalued? Let's take a look. 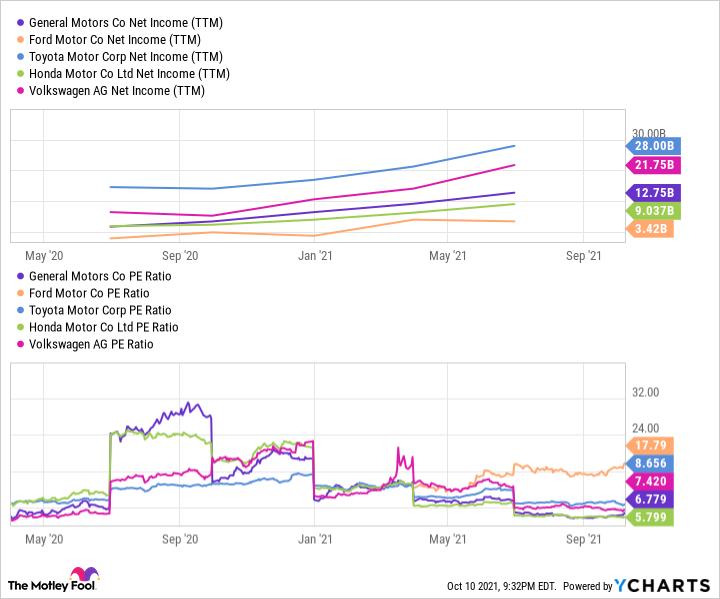 If you had invested in traditional auto stocks since the start of 2000, your performance would hardly be impressive. General Motors, Toyota, Honda, Ford, and Volkswagen have all underperformed the market, and you could buy all five manufacturers for less than $600 billion, based on today's market capitalizations. Their valuations haven't fallen relative to historical valuations as EVs have hit the market -- automakers have always had relatively low valuations because of the boom-and-bust nature of the business. 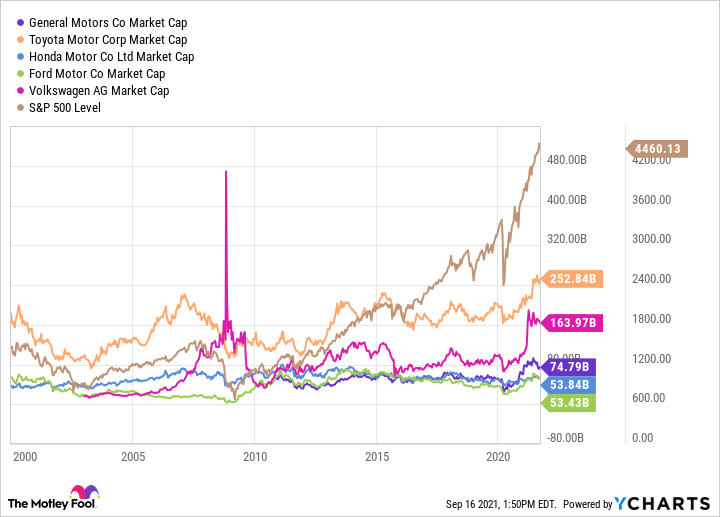 Compare these valuations to five of the most valuable EV manufacturers today. 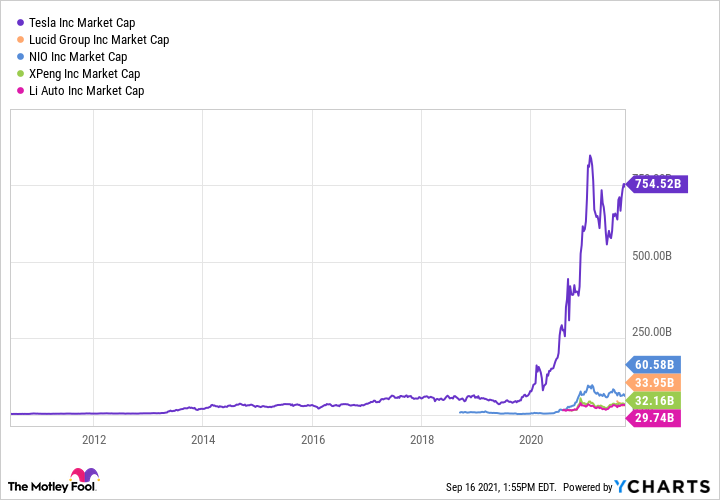 This chart doesn't even include Rivian, which could go public with an $80 billion valuation, or Nikola, Workhorse Group, Canoo, Fisker, and a number of start-ups that are effectively pre-revenue. This is a very crowded field today.

Tesla is relatively established as a manufacturer, but companies like Lucid are still in pre-production and many manufacturers are just starting to ramp up operations in a meaningful way. Clearly, the market thinks the economics of manufacturing EVs long term is going to be far better than the economics of the traditional auto industry over the last century. I think we should be skeptical of that.

A good way to understand the strategic position of auto manufacturers is to consider Porter's Five Forces for the industry. Porter's Five Forces is a method for analysing a business's competitive position developed by Michael Porter at Harvard University and is commonly taught in business schools today.

I have laid out the five forces below and how I see the traditional auto fits into this analysis today, based on a low/medium/high level. You can adjust any of these factors if you disagree with my analysis.

The threat of new entrants to the auto business is low and has been for decades, given the high cost to design vehicles and build manufacturing capacity. Suppliers have some power in the market because many are large and have significant scale, but there's a limit to their power. Buyers do have bargaining power because they can simply go to any other automaker for a vehicle. The threat of substituting one brand for another is also high. And given relatively low margins for automakers and the money spent on advertising vehicles, we know that rivalry among competitors is high.

The same forces don't hold for the EV industry today, where economics will likely be far better for the next few years for some very critical reasons.

EV financials may never be better than they are today

Looking at the same five forces for the EV industry, we see a much more attractive environment.

There's a bigger potential threat of new entrants today than there was in the traditional auto industry, partially because many of these new entrants are public and can raise capital from equity markets relatively easily. But it's still extremely difficult to establish an auto company today -- so I only made that a medium threat level. But it's also clear that the intensity of rivalry among EV manufacturers is nearly nonexistent, there are very few substitutable options for customers given a limited number of models available, and buyers have little bargaining power because there are so few options.

To add to the improved position of EV companies today, they're getting a financial windfall from government regulations and tax incentives, and benefiting from disrupting a slow-moving legacy business.

What I see from both the Porter's Five Forces analysis above and the five bullet points is there are tailwinds behind EV companies today. But in every single case, I think the tailwind has an end date.

Add all of this up and I think we will see an increased level of rivalry, a bigger threat of substitutes from one EV to the next, and more bargaining power from buyers. Long term, Porter's Five Forces and the strategic position of EV manufacturers resemble that of auto companies over the last 50 years. In all likelihood, EV manufacturers will face the same rise and fall of demand during recessions and ultimately pricing pressure that will hurt margins. Some of that threat will come from traditional auto companies themselves, but some competition will be EV-maker versus EV-maker in the marketplace. 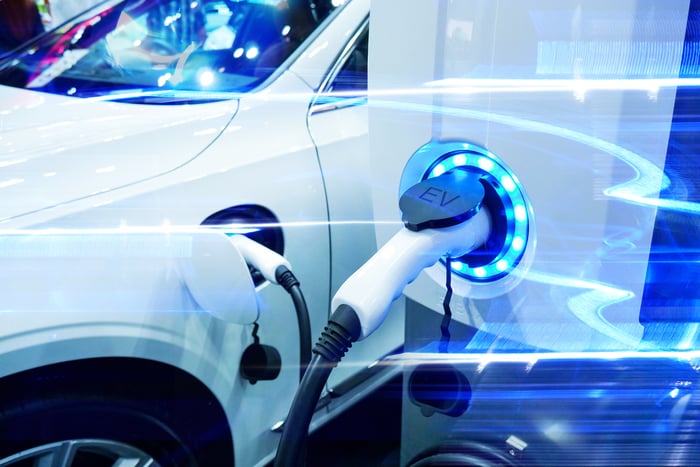 When I consider EV companies over the long term, they look a lot like traditional automakers. They are manufacturers just like traditional automakers and some haven't even proven the ability to be world-class manufacturers. They need to grow, develop technology, market products, hold off competitors, and at the end of the day hope they can make enough money on vehicle sales to cover enormous fixed costs associated with operating an auto company.

Add it up and this looks like EV stocks are much more fallible than investors think right now, which makes me very hesitant about investing in this space at all.