Netflix (NASDAQ:NFLX) recently posted its third-quarter earnings. The streaming media platform's revenue rose 16% year over year to $7.48 billion, matching analysts' estimates, as its earnings per share (EPS) jumped 83% to $3.19 and beat estimates by $0.63.

Netflix's growth rates looked solid, but they barely moved its stock price. Should investors buy the stock now as other investors shrug? Let's examine three reasons to buy Netflix -- as well as one reason to sell it -- to decide. 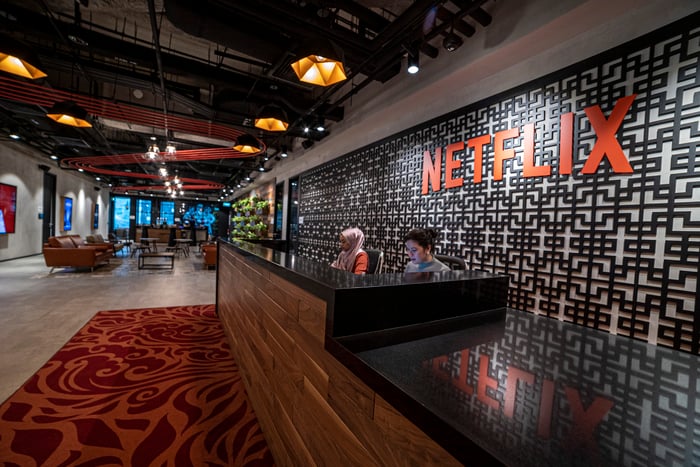 Netflix's number of paid subscribers rose 9.4% year over year to 213.56 million during the third quarter. It expects to end the year with 222.06 million paid subscribers, an increase of 9% from the previous year.

That represents a slowdown from its 21.9% growth at the end of 2020, which benefited from stay-at-home trends during the pandemic. But it still makes it the world's largest premium streaming video platform by a wide margin.

Netflix's third-quarter growth was led by the latest releases of popular series like The Great British Baking Show, Lucifer, Sex Education, Money Heist, and Sexy Beasts, as well as original films like Gunpowder Milkshake, Kate and He's All That. The South Korean drama Squid Game also became the platform's most popular show ever after its initial release on Sept. 17. Those hit titles suggest that Netflix doesn't need massive evergreen IPs like Disney to retain its viewers.

Netflix's ARM (average revenue per membership) also rose 5% year over year on a constant currency basis in the third quarter, accelerating from its 4% growth in the second quarter. That stable growth indicates Netflix still has plenty of pricing power against its lower-priced competitors.

Netflix's revenue rose 20% year over year in the first nine months of 2021, and it expects its revenue to rise 19% for the full year.

Netflix's EPS more than doubled in the first nine months of 2021, mainly due to postponed projects during the pandemic. It expects its operating margin to decline sharply in the fourth quarter as it ramps up its spending on fresh content again, but it still expects its EPS to rise 76% for the full year.

Analysts expect Netflix's revenue and earnings to rise 15% and 24%, respectively, next year. By comparison, iQiyi (NASDAQ:IQ), once lauded as the "Netflix of China," is expected to generate just 11% sales growth next year as its bottom line remains in the red.

Netflix's free cash flow (FCF) turned negative in the second and third quarters of 2021 as it ramped up its production of new content again, and it expects its full-year FCF to be "approximately breakeven." However, it expects its FCF to turn firmly positive on an annual basis in "2022 and beyond."

That forecast, along with Netflix's confident allocation of $5 billion toward buybacks earlier this year, counters the bearish notion that the company will burn through too much cash as it tries to stay ahead of Disney.

Netflix trades at just under 50 times forward earnings and roughly nine times this year's sales. Those valuations aren't cheap, but they're a lot more reasonable than the metrics of some other hyper-growth stocks.

For example, Roku (NASDAQ:ROKU), the streaming device and platform provider that was founded by a former Netflix executive, trades at about 180 times forward earnings and 16 times this year's sales. Analysts expect Roku's revenue to rise 60% this year, with its first annual adjusted profit.

The one reason to sell Netflix: its lack of diversification

Netflix is gradually diversifying its business with an online store for tie-in merchandise and free mobile games for certain markets. But it still generates nearly all of its revenue from paid subscriptions, and it's repeatedly rejected calls to launch a cheaper ad-supported tier.

That lack of diversification could make it tough for Netflix to weather a slowdown or a creative drought in new content. Meanwhile, more diversified media giants like Disney can simply rely on the growth of their other businesses if their streaming platforms temporarily run out of steam.

Do Netflix's strengths outweigh its weaknesses?

Netflix isn't my favorite FAANG stock, but the company continues to evolve with fresh content and expand into new markets, and its stock isn't expensive.

Its rigid dependence on paid subscriptions is a soft spot, but I believe it won't offset its many strengths anytime soon. Therefore, Netflix is still a solid long-term investment, and it remains a better value than many other tech stocks.