Given the ubiquity of the PepsiCo (NASDAQ:PEP) brand worldwide, it is easy to think of Pepsi as a mature company that is past the growth phase of its lifecycle. While Pepsi isn't growing like an early stage tech stock, there is plenty to like about the consumer packaged goods giant. 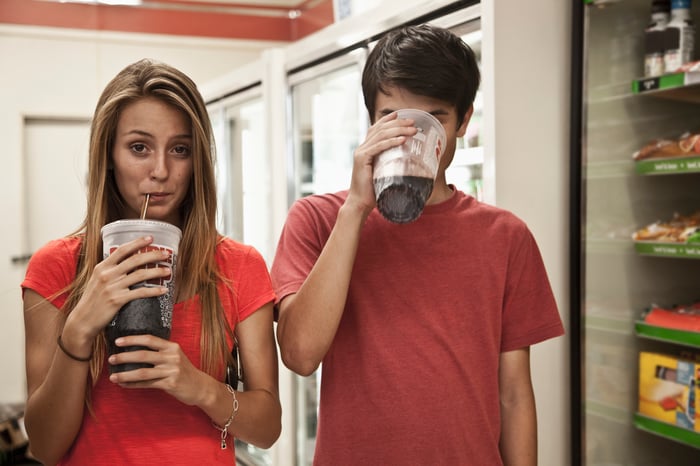 Growth in consumption of soft drinks, bottled water and snacks is closely correlated with global GDP growth and population growth, which bodes well for Pepsi as more people around the globe enter the world's middle class. The company also has plenty of runway ahead in terms of gaining market share. According to the company's 2021 presentation at the Consumer Analyst Group of New York, Pepsi currently has a 9% share of the $570 billion global beverage business. The company simultaneously has a 7% share of the $550 billion global snacks business and boasts a portfolio of well-known brands, including Doritos, Tostitos and Cheetos. Both of these opportunities are growing at a 4-5% compounded annual growth rate per year so this growth combined with Pepsi's ability to take market share means there is plenty of potential runway ahead.

Given the size of the global beverage and snack markets, gaining a percentage point or two of market share in each category over the next several years would be significant for Pepsi's top-line growth. Initiatives like the 2020 launch of Snacks.com (as well as Pantryshop.com) as a way to increase its direct-to-consumer business during a time when many traditional channels faced challenges as a result of the COVID-19 pandemic, show that despite Pepsi's size, it is willing to adapt to changing trends and market conditions.

Pepsi's shares returned almost 50% over the past five years, and they held up very well during 2020's COVID-19 spurred downturn. In fact, Pepsi managed to post organic revenue growth of over 4% during 2020.

Pepsi is serious about shareholder returns

Pepsi currently pays a dividend that yields just under 3%, adding to its defensive prowess and making it a great choice for income-seeking investors. Pepsi is currently a Dividend Aristocrat, and raised its dividend payout 5% this past May (during a challenging time for many businesses), making this the 49th consecutive year that Pepsi has raised its payout amount.

In the likely event that Pepsi again raises its dividend payout for a 50th consecutive year in 2022, the company will be bestowed with the coveted Dividend King designation. Given the company's track record and the chance to join this illustrious group, continued increases seem extremely likely, making Pepsi an attractive dividend growth story. Pepsi shareholders can expect the company to continue to return cash to them via its dividend and to continually increase this dividend for the foreseeable future.

In addition to consistent dividend growth, Pepsi has also historically used share repurchases to return value to its shareholders. The company allocated a modest $106 million to share buybacks in 2021, but could increase its buybacks going forward if it finds this to be the most accretive use of its capital.

Blueprint for addressing the risks

While declines in the popularity of Pepsi's core soft drink business due to health concerns are a key potential risk, the company is well-diversified, and more diversified than rival Coca-Cola (NYSE:KO), which should help Pepsi manage this risk over time. Pepsi recognized shifts in consumer tastes and moved into healthier seltzers with product lines like Bubly, and its acquisition of Sodastream. Even if sugary soft drinks were to fall more out of favor or become a target of regulators, note that major tobacco companies like Altria have set a blueprint for how to succeed against this backdrop, outperforming the market for years with a mix of good capital allocation and significant returns to shareholders despite the headwinds.

Pepsi is a solid portfolio cornerstone

Mid-single digit organic growth and the chance to grow market share over time in developing markets and new verticals like snack foods and seltzers coupled with a dividend yield of nearly 3% make Pepsi a strong candidate to continue to return 10% a year over the next several years. Management has shown it can adapt to macroeconomic challenges and market changes. Shares have proven their resilience during market turbulence and this defensiveness combined with a steady, growing dividend payout make Pepsi a strong choice to be a foundational part of a well-balanced portfolio.