Shares of PLBY Group (NASDAQ:PLBY), which describes itself as a pleasure and leisure lifestyle company, are rising by as much as a third this week. By roughly midday on Thursday, the shares were still up a hefty 30% or so.

Big moves aren't unusual in this stock, which has specifically worked to attach itself to key market themes, like non-fungible tokens. These efforts have stoked investor interest off and on, depending on Wall Street's mood, since the company went public via a blank-check company in February. This week, the company is clearly getting a lot of interest from investors based on two new business updates. 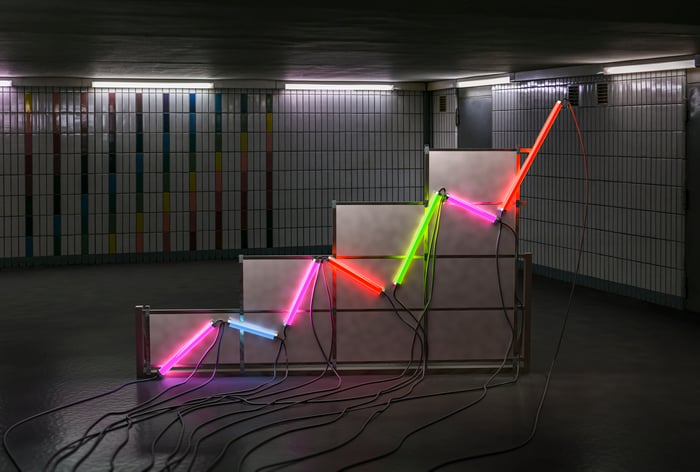 On Oct. 18, the first day of the week, PLBY Group announced that it was acquiring Dream, a social content platform, for $30 million. This platform allows creators to interact with their fans and will be used to help launch PLBY Group's own Centerfold service. This will help jump-start PLBY's efforts with this new service, with an expected launch date in the fourth quarter of this year. PLBY describes Centerfold as a "curated, creator-led platform dedicated to creative freedom, artistic expression, and sex positivity." This will be, as you might expect from the company that owns the Playboy brand, an adult-themed site.

Just two days later, on Oct. 20, PLBY Group announced that it was going to be selling rabbit-themed NFTs. There will be 11,953 of them (a number that highlights Playboy's 1953 start), and they will be sold in three tranches. The plan is for each unique token to grant the owner access to a "reimagined Playboy Club." According to PLBY Group, owners will have "access to benefits like special members-only events, merchandise, artwork, and exclusive artist collaborations." The cost listed in the news release is 0.1953 Ethereum (CRYPTO:ETH) or the equivalent in U.S. dollars, as well.

As has been the case since the company's IPO, both of these news updates tap into key technology themes. And investors appear to like the direction that PLBY Group is heading.

However, PLBY Group is not an appropriate stock for risk-averse investors. It is making bold moves and taking an old brand in a new direction. But it is far from clear whether or not the new direction will work out as well as planned. And the stock has more than doubled since it started trading, even though it was up more than 350% at one point earlier in the year.

In other words, unless you are ready and willing to ride a roller coaster, PLBY Group is probably best watched from the sidelines. That said, more-aggressive types might want to buy into the technology transformation story here (and there really is more story than substance at this point).