Summer and autumn 2021 have seen initial public offerings (IPOs) from two companies related to hair removal. First to go public was European Wax Center (NASDAQ:EWCZ), a waxing and skin care salon chain founded as a private company 17 years ago. Now, in mid-October, laser hair removal company Milan Laser has filed for an IPO, too, which will probably end up valuing the enterprise at about a billion.

Some of the metrics of these companies look quite positive, though European Wax Center at least has shown a lot of volatility, so bullishness should be tempered with caution.

European Wax Center -- big gains, but not as smooth as its treatments

Barely two and a half months out from its Aug. 5, 2021 IPO, European Wax Center sold its initial shares at $17 apiece, raising an approximate $180 million in proceeds. As of mid-October, its shares are trading in the $25 to $27 region, or a nearly 60% upside from its launch. This gives it a current market capitalization (market cap) of $1.73 billion, with relatively low short interest of 4.65%.

CEO David Berg noted the company's "sales momentum [is] building sequentially from our most recent two quarters, a positive indicator that guests continue to return to their beauty and personal care regimen following pandemic related closures." 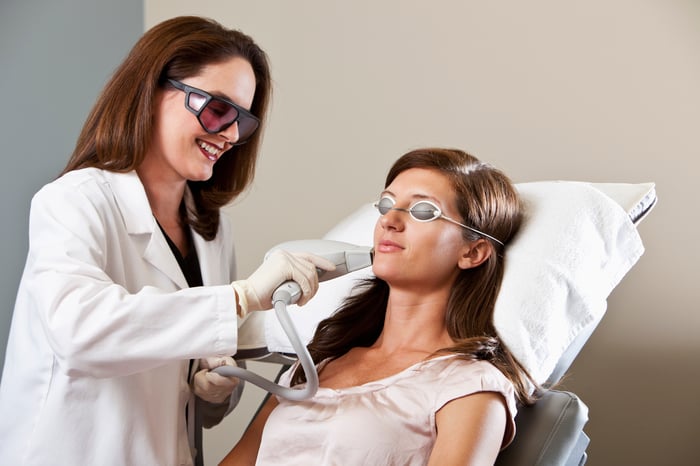 These metrics give a snapshot of its strong recovery from the economic struggles of 2020. However, it's the two-year stack, or comparison of Q2 fiscal 2021 to pre-pandemic Q2 fiscal 2019, that provides a longer-term perspective on European Wax Center's growth. Again, according to its earnings report, revenue rose 11% and net income jumped 25.7% compared to 2019's quarterly results. This shows an ongoing trajectory of growth, combined with increased efficiency and streamlining in turning sales into earnings.

Against a background of increased preference for waxing over shaving, market research published by the Industry Research company in early October pegs the worldwide wax hair removal market at approximately $9.3 billion, while predicting 2.21% compound annual growth rate (CAGR) through 2027. Other sources put the market's CAGR as high as 6% through 2031.

Low to mid-single-digit yearly sector sales growth over the next six to 10 years appears to be the takeaway from these forecasts, depicting a moderately bullish long-term environment for European Wax.

Where European Wax Center focuses on waxing treatments to give customers a fashionably hairless look, Milan Laser's salons employ lasers as their chief method of hair removal. It operates over 140 locations, mostly clustered in New England and the Great Lakes region, though with a smaller presence in the Plains states and Texas, too. The company hasn't yet started public trading, but it filed with the SEC for its IPO on Oct. 15. It is requesting the ticker MLAN, trading on the New York Stock Exchange (NYSE:MLAN).

The preliminary filing hasn't yet shed light on the size of its IPO beyond the customary $100 million placeholder, but Bloomberg News cites inside sources claiming a roughly $1 billion valuation for the company once it goes public. The company's S-1 filing with the SEC reveals some important metrics about its operations.

The number of clinics it operates has soared from just 19 to the current 140 or more since 2017, while its net bookings have grown even more sharply, from $13.3 million in 2017 to $168.7 million for the 12 months ending on June 30, 2021. The company claims its "business model delivers strong financial performance regardless of external economic factors," asserting it had "positive monthly same clinic net bookings growth for all months in 2020 and 2021 with the sole exceptions of March, April and May 2020" during compulsory government closures.

Revenue for 2021's first six months soared 161.7% to $71.7 million year over year, while also outdoing the same period in 2019 by 305%. It also generated $10 million in positive net income for 2021's first half versus net losses for the previous two years. While all of this is bullish, there are a few warning signs. Its accumulated deficit is $248 million, against about $23 million in cash, though its IPO will probably more than redress the balance.

The company also notes that its profits are largely driven by expansion, remarking that a "key component of our long-term growth strategy is to open new clinics and to operate those clinics on a profitable basis." Milan Laser will have to continue to spend significantly to build out its network of clinics as a prerequisite for growth.

While market research firms are forecasting single-digit growth for waxing hair removal over the next decade, data suggests laser hair removal is a hotter commodity. According to a report by Fortune Business Insights, released in mid-October 2021, the market might grow at a 15.2% CAGR through 2027, reaching almost $14 billion by that year.

The investing outlook on European Wax and Milan Laser

Both companies appear to be operating in a growth market and have a business model producing positive results. While they may have experienced a few hair-raising moments during the worst of the government's coronavirus lockdowns, both are back on track for future growth. In fact, people appear to be eager to pamper themselves in the wake of COVID-19, a trend also visible in the luxury sector. Given these facts, is either one a better choice for investors?

European Wax Center's year-over-year metrics show the speed and vigor of its recovery from 2020's lows, while its two-year stack highlights an ongoing trend of low double-digit growth that looks positive for the future. It has more salons than Milan Laser and has already demonstrated robust stock market growth since its IPO. On the downside, if market research firms are correct, wax hair removal demand is growing much slower than laser hair removal. European Wax's stock has also shown a lot of volatility.

Milan Laser still has all the risks of an IPO before it, and is carrying considerable debt, with an accumulated deficit. However, it has shown outstanding growth since before the pandemic, and was potentially less affected by the lockdowns than European Wax Center. It's operating in the laser hair removal sector, where growth is soaring according to market research.

Overall, both of these hair removal companies look like they have a bullish future, and both appear likely to be a good investment. Milan Laser, though, may have a slight edge thanks to high laser treatment demand if choosing between these two consumer discretionary stocks.