Pinterest (NYSE:PINS) is slated to report its third-quarter 2021 results after the market close on Thursday, Nov. 4. A conference call with analysts is scheduled for the same day at 6 p.m. EDT.

Investors in the image-sharing platform operator will probably be approaching the report with a fair dose of caution. This statement is probably even more true after last week's news that sent shares on a roller-coaster of a ride, up and then down.

On Wednesday, reports came out that financial tech giant PayPal (NASDAQ:PYPL) is in late-stage talks to acquire Pinterest at about $70 per share. If these reports prove true, that would be good news for investors who bought Pinterest stock before late 2020, as it traded below that level up until then. For context, Pinterest stock closed at $58.06 on Friday.

On Friday, Pinterest and other social media stocks dropped following Snap's release of its third-quarter results. The owner of the Snapchat messaging app reported revenue and revenue guidance that were weaker than Wall Street was expecting. The company said Apple's (NASDAQ:AAPL) privacy changes related to advertising on mobile apps hurt its revenue. Investors are concerned that a similar dynamic occurred with Pinterest.

Here's what to watch in Pinterest's Q3 report. 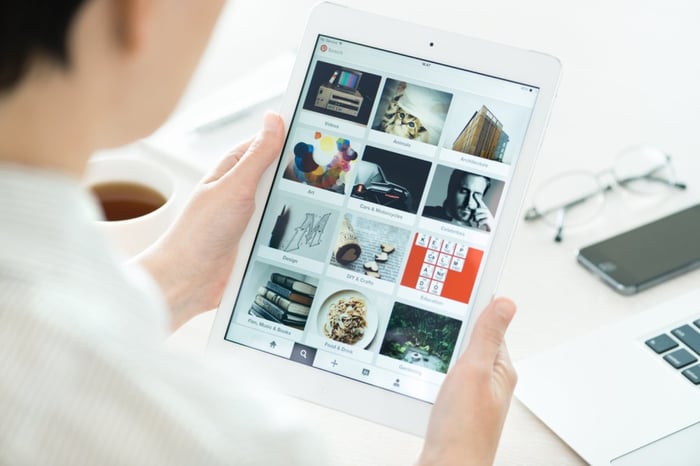 Following are the company's results from Q3 2020, its Q3 2021 guidance, and Wall Street's consensus estimates to use as benchmarks.

For context, in the second quarter, Pinterest's revenue surged 125% year over year to $613.2 million. That result sped by Wall Street's consensus estimate of $561.9 million as well as the company's guidance of 105% growth. Adjusted net income was $169.9 million, or $0.25 per share, up from an adjusted loss of $38.4 million, or $0.07 per share, in the year-ago period. That result was nearly double the $0.13 per share analysts had been expecting.

Shares fell more than 18% the day after the release, despite the upside surprises on the top and bottom lines, and third-quarter revenue guidance that also was higher than widely expected. The culprit was U.S. user growth that fell short of management's guidance.

Pinterest's revenue is determined by two metrics: the number of global MAUs and global average revenue per user (ARPU), which reflects the advertising rates it achieved.

Last quarter, global MAUs rose 9% year over year to 454 million, and global ARPU soared 89% to $1.32. "What spooked many investors was U.S. MAUs falling 5% year over year to 91 million," as I previously wrote. "Pinterest had guided for U.S. MAUs to be roughly flat with the year-ago period."

The market looks ahead, so Pinterest's guidance could be even more important than its third-quarter results relative to moving its stock.

For the fourth quarter, analysts are modeling for Pinterest's revenue to increase 24% year over year to $876.7 million and its adjusted EPS to rise 9.3% to $0.47.

Long-term investors should remember that one quarter is just one quarter and not overreact to the third-quarter results. If you're not a short-term trader, Pinterest's prospects over the next few years and beyond is what's important.

I continue to favor Pinterest in the broad social media category. The key reason is that the company's "platform is product-centric -- in a way not unlike Amazon's -- so it's a particularly good alignment with an advertising business model," I wrote in the fall of 2019, and still believe.