The stock market  has done quite well recently, gaining momentum after a brief scare in September related to rising inflationary pressures and worries about the COVID-19 delta variant. Investors seem a lot more comfortable that the U.S. economy is strong enough to overcome headwinds and sustain its long-term growth trends. As of 1:30 p.m. EDT, the Dow Jones Industrial Average (DJINDICES:^DJI) was up 89 points to 35,766, setting an all-time high. The S&P 500 (SNPINDEX:^GSPC) rose 24 points to 4,569, also on pace for a record close, and the Nasdaq Composite (NASDAQINDEX:^IXIC) picked up 136 points to 15,226.

Behind the market's performance have been extraordinary performances from some high-profile stocks. On Monday, shares of Tesla (NASDAQ:TSLA) and Cloudflare (NYSE:NET) reached levels they've never seen before, and many investors believe that there could be even further gains from the two innovative companies in the months to come. Below, we'll take a closer look at what's driving these two stocks higher on Monday. 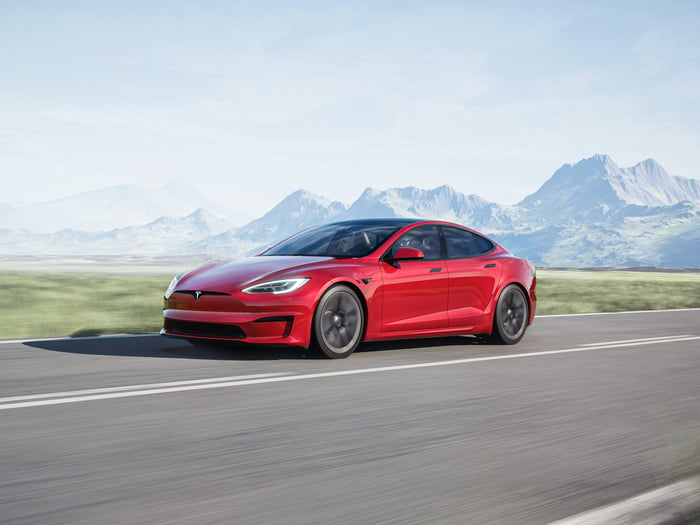 Shares of Tesla were up more than 9% Monday afternoon. That brought the stock price to just shy of $1,000 per share, and it sent the electric vehicle pioneer's market capitalization close to the $1 trillion mark.

Several factors helped to send Tesla's stock higher. Wall Street analysts have been increasingly optimistic about Tesla's prospects, and analysts at Morgan Stanley boosted their price target on the automaker's stock to $1,200 per share, up by $300 from its previous target. In addition, rental car company Hertz (OTC: HTZZ) made an initial EV order for 100,000 Tesla vehicles, with the expectation of taking delivery by the end of 2022.

Tesla's recent earnings report highlighted the huge efforts that the automaker has made to bolster its production capacity. With the company all but certain to reach its 750,000 vehicle-delivery target for 2021, the next step is ensuring that 2022 can take Tesla's deliveries well past the 1 million mark.

Tesla stock has been a favorite among individual investors, and the company's fundamental business performance has been impressive as well. Despite constant concerns from some investors about valuation, Tesla's shares have the potential to keep climbing even from current levels.

Heading into the cloud

Meanwhile, shares of Cloudflare were up more than 5% on Monday afternoon. That left Cloudflare's market capitalization at a much more modest level of $61 billion when compared to Tesla, but the stock has never been higher, and the company has a lot of tailwinds that should support further growth.

Edge network services have become increasingly important as more companies rely more heavily on cloud computing and build out their online business presence. Cloudflare has been able to capitalize on this huge demand while avoiding some of the pitfalls that have presented challenges to its peers in the industry. It has attracted some of the biggest companies in the world as clients, and it has been able to retain its customers while encouraging them to increase their spending on cloud-computing services over time.

Cloudflare is poised to report earnings in early November, and shareholders are optimistic that the company will be able to sustain its positive momentum. As the global economy recovers, current and potential clients will be in an even better position to scale up their investments in IT development. Expectations are already high for Cloudflare, so earnings results will probably have to be demonstrably superior in order to satisfy investors.

When markets hit record highs, there are always strong stocks that are setting the pace. Moves for Tesla and Cloudflare are great examples of exciting investments that are helping to bolster Wall Street as we approach the end of the year.