Netflix (NASDAQ:NFLX) just reported third-quarter financial results, and the highlight, unsurprisingly, was the addition of 4.4 million new members. The leader in streaming entertainment now has more than 213 million subscribers worldwide, and management expects to add 8.5 million customers in the fourth quarter.

While the growth has certainly slowed following a pandemic surge in 2020, the business still has an ample opportunity overseas. Attracting eyeballs by continuing to create compelling content will be the strategy. Shareholders are probably wondering just how big Netflix can get.

Can the streaming pioneer one day reach 1 billion subscribers? 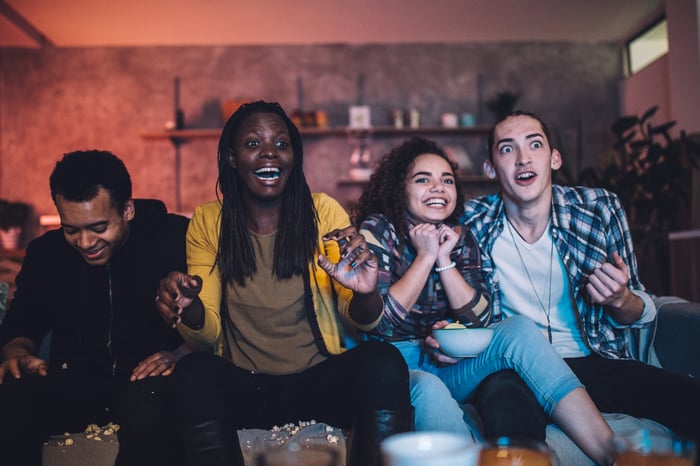 Because Netflix delivers its service over the internet, it has the technological capability (barring government intervention) to serve every person worldwide who has a high-speed connection. There are 1 billion pay-TV households and roughly 1.2 billion broadband households worldwide today, so this gives us a realistic upper limit to what the company can hope to achieve when it comes to current paying accounts.

Netflix co-founder and co-CEO Reed Hastings talked about his company entertaining the world on the latest earnings call. Again, the internet allows Netflix to become a truly global media business. Even in the saturated U.S. market, which is ahead of the rest of the world when it comes to streaming penetration, streaming accounts for only 28% of total TV time, with Netflix taking 6% of the total pie. The chance to grow users and engagement is there not just globally, but domestically as well.

How long will it take Netflix to be able to entertain the world? "It will take a couple of decades to get there," Hastings pointed out. Management is definitely thinking huge, and this is what shareholders should want.

From 2018 through 2020, Netflix spent a whopping $38.7 billion in cash on content. And this year, the company plans to spend $17 billion. But the management team thinks this figure can go much higher. Hastings said, "It would be incredibly satisfying if we could build up to much bigger content budgets that we have usefully deployed for our members to love."

Netflix clearly has proven its adeptness at releasing incredible content that has wide cultural appeal. This is perfectly exemplified by the monster success of Squid Game, which was viewed by 142 million accounts in the first four weeks of its release. Don't forget Netflix's impressive Emmy and Oscar wins each and every year.

If the business wants to be in 1 billion households worldwide, then it makes perfect sense that the money spent on content needs to grow significantly. Luckily for shareholders averse to debt, this isn't likely to come from external financing anymore. What's more, management expects Netflix to start generating positive free cash flow starting in 2022. And with expected revenue for 2021 of $29.7 billion, there's plenty of money coming in that can be used for growth.

Netflix still has a massive untapped opportunity in international markets. The company is investing heavily in local-language content in India, a country that is expected to have 900 million active internet users by 2025. And to help attract more customers, Netflix released a low-cost mobile-only plan in 78 countries across Southeast Asia and sub-Saharan Africa in the second quarter. As these countries become more developed and incomes rise, the hope is for members to graduate to higher-priced subscription tiers.

I think it's reasonable to expect the business to add approximately 25 million to 30 million subscribers on average in any given year for the foreseeable future. Netflix's focus on those mobile plans, and mobile in general with the push into video games, reduces friction, raises the value proposition, and opens up the market potential for new customers. So, I don't think it's totally out of the question that those yearly subscriber additions can actually accelerate as time passes.

Hitting 1 billion membership accounts would realistically take more than a couple of decades to achieve. But based on Netflix's remarkable success over the past 10 years, its ability to create compelling content that's loved all over the world, and the long secular shift away from traditional cable TV, I think it's very possible.

Netflix stock can be a solid foundation for your portfolio, with a sizable upside over the long term.