The once-racy retailer's trying to catch up to rivals with a more inclusive image.

Ahead of its second ever earnings season as a stand-alone company, Victoria's Secret (VSCO -0.95%) is a name to watch. The company, which retains its spot as the No. 1 women's underwear brand by market share in America, has an opportunity to show investors whether or not it has strong potential for future growth. 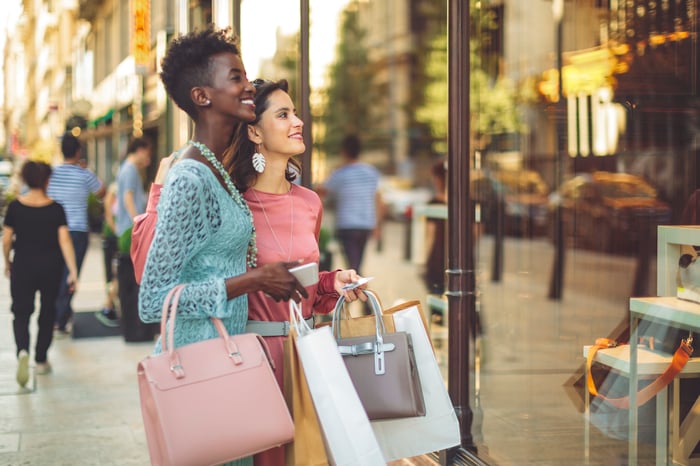 Victoria's Secret is a giant in its product category, but one whose reputation has been battered by changing social attitudes and company scandals. Earlier this year, Victoria's Secret retired its iconic "Angels" branding, represented by a group of spokesmodels with a highly exclusive and traditionally feminine image. Victoria's Secret's new brand ambassadors, the VS Collective, are made up of activists such as Megan Rapinoe, a soccer star known for her advocacy of pay equality and LGBTQ rights.

In addition, more and more brands have been moving into Victoria's Secret's space. Generalist garment retailers like Hanes, Fruit of the Loom, and Jockey are narrowing the sales gap between their brands and Victoria's Secret's. On the higher end, specialty retailers like American Eagle's (AEO -3.17%) Aerie and Rihanna's Savage by Fenty both enjoy positive brand image among female consumers, and they understood the importance of cultivating this image through inclusivity years before Victoria's Secret did.

Victoria's Secret is playing catch-up -- but how can it do so most effectively? The company's retail presence -- the largest for specialty retailers of women's innerwear in the nation -- offers one promising possibility. Compared to its rivals, Victoria's Secret's many retail locations give its products the highest chance that shoppers will see them in person.

However, the rent and staffing costs associated with this large retail presence can also be a liability in a world of crowded e-commerce and empty malls. If sales aren't strong enough to justify these operational expenses, the company's retail strategy needs to be reevaluated. Victoria's Secret closed around 250 stores in 2020 and plans to close between 30 to 50 stores this year. The company's strategic initiatives this year include testing different store concepts by placing stores in off-mall locations with different interior design and merchandising tactics. (Former corporate sibling Bath & Body Works (BBWI -0.36%), the much stronger brand under former parent company L Brands, has around half of its retail footprint in off-mall locations.)

"In the old days, the Victoria brand had a single lens, which was called 'sexy,'" CEO Martin Waters said in an interview with The New York Times. But now, Victoria's Secret is listening to consumers by bringing back swimwear, as well as introducing maternity clothing and shapewear, product categories Victoria's Secret hasn't carried before. These products open up new demographic markets and also reflect a willingness to serve more customers, signalling that Victoria's Secret can be a brand for many different types of women, just as its competitors like Fenty are. Victoria's Secret has even launched a mastectomy bra for cancer survivors.

In addition, Victoria's Secret is spending less on marketing and closing underperforming stores to cut costs.

Although its market share and physical footprint have declined, Victoria's Secret is still the leader. This is an iconic brand attempting a huge transformation and its journey will be interesting to follow. Whether it can stay the leader remains to be seen. Investors should watch the impact the company's product and marketing changes have on its existing sales lead over its competitors, to see whether those changes can propel Victoria's Secret back to its former heights.

Is Victoria's Secret's 2022 Slowdown a Blip or a Long-Term Problem?

Why Victoria's Secret Stock Was Falling This Week