These two pharma giants are among the safest plays in the market right now.

Wall Street is starting to get nervous about a potential market correction of 10% or more in the coming months, and perhaps for good reason. First off, every major U.S. stock index is either at or near its all-time high. That fact alone doesn't necessarily mean a crash is imminent. But there's no doubt that valuations for some of the biggest and most visible large-cap companies are no longer in line with their underlying fundamentals.

Second, the U.S. Federal Reserve recently admitted that inflation will continue to be a problem well into 2022. As inflation negatively impacts consumer spending power, this unfavorable trend might dampen earnings in the coming quarters. What's more, U.S. workers are reportedly quitting their jobs at a historic rate in 2021. This so-called "Great Resignation" could worsen the emerging inflation problem, as U.S. companies are forced to increase wages and benefits packages to fill out their labor force. 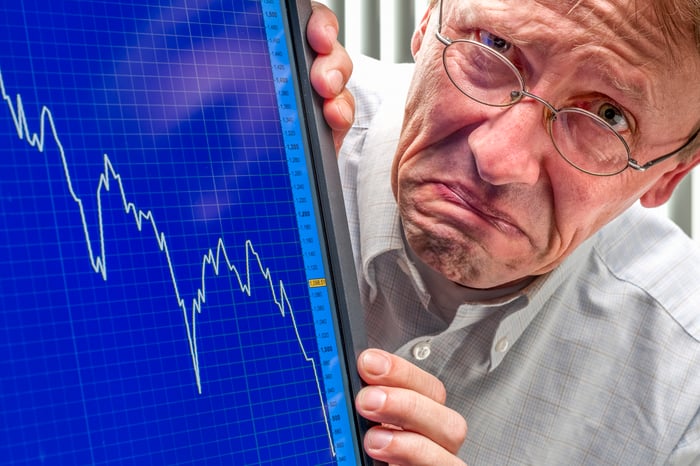 What should investors do to protect their portfolios in this uncertain economic climate? One proven strategy is to buy and hold shares of top-notch companies that operate in sectors that are largely insulated from economic downturns, that sport attractive long-term valuations, and that offer elite level shareholder rewards (share repurchases and dividends).

The big pharma companies Pfizer (PFE 0.91%) and Merck (MRK -4.22%) both meet these three criteria. Read on to find out why these two blue-chip pharmaceutical stocks should appeal to defensive-oriented investors right now.

Pfizer: A much-needed change of direction

Over the last decade, Pfizer's stock performance wasn't anything to get particularly excited about. The drugmaker's former management team mainly relied on massive share repurchases and a bevy of expensive bolt-on acquisitions to keep its shares headed in the right direction.

Even then, Pfizer's stock still underperformed the broader U.S. markets during this period due to a combination of controversial drug price increases, a wave of patent expirations, and a slower-than-expected restructuring process. The chart below of the drugmaker's total returns on capital (including dividends) vs. the total returns for the S&P 500 (^GSPC 1.69%) over the prior 10-year period illustrates this point nicely: 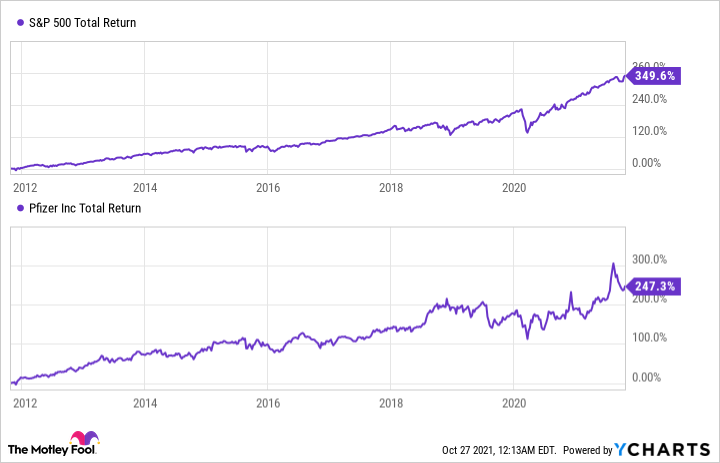 Thanks to a change in leadership with the hiring of CEO Albert Bourla in January 2019 and a subsequent overhaul of the pharma giant in 2020 through the spinoff of its legacy products business (now part of Viatris), Pfizer's shares have started to deliver better annual returns for shareholders of late. Of course, a big reason for this sudden uptick in Pfizer's stock price is the company's brilliant decision to pair up with the German biotech BioNTech in April 2020 to develop a messenger RNA (mRNA) COVID-19 vaccine. That single product is on course to generate a whopping $33.5 billion in sales this year.

The new-look Pfizer, however, isn't a one-trick pony. The drugmaker recently bought the clinical-stage oncology company Trillium Therapeutics to add novel assets to its cancer pipeline, it sports another potential megablockbuster vaccine indicated for respiratory syncytial virus, and the company is also working on an oral therapy for COVID-19 that could be a big seller in 2022 and beyond. And those are just a few of the highlights from the pharma titan's expansive clinical pipeline.

Pfizer also offers investors one of the best shareholder rewards programs in the industry. At present, the drugmaker's annualized dividend yield stands at an attractive 3.62%. What's more, the company has now paid out dividends for 330 straight quarters and it still has over $5 billion remaining in its current share-purchase program. On the value side of things, Pfizer's shares are only trading at a forward-looking price-to-earnings ratio of about 11 at the time of writing. That's dirt cheap for a blue-chip dividend-paying pharma stock.

Last year, Merck's stock was the second-worst performer among large-cap drug manufacturers. The company failed to get in on the COVID-19 vaccine game, and its pharmaceutical business was hurt by fewer visits to the doctor due to the pandemic.

However, this unloved big pharma stock still stands out as a safe haven against a possible market downturn for a variety of reasons. First and foremost, the company recently hit the mark in the clinic with its oral COVID-19 pill known as molnupiravir. This oral antiviral medication was co-developed with privately held Ridgeback Biotherapeutics. What's important to understand is that Wall Street expects the drugmaker's top line to rise by a healthy 11% next year, in large part because of this key clinical success.

Next up, Merck sports the top-selling cancer drug Keytruda as its flagship product. Keytruda is on track to become the world's best-selling drug as soon as 2023, thanks to a long line of potential label expansions in the coming years. The drugmaker also recently acquired Acceleron Pharma (XLRN). This marquee transaction will add the high-value pulmonary arterial hypertension drug candidate sotatercept, along with the Food and Drug Administration-approved blood disorder therapy Reblozyl, to its already impressive lineup.

Finally, Merck's stock also comes with a rock-solid shareholder rewards program and its shares are trading at an attractive valuation right now. The big pharma's stock presently yields an annualized dividend yield of 3.2%. Moreover, the company still has a whopping $5.6 billion left under its current shareholder repurchase program. Value-wise, this top biopharma stock is trading at bargain-basement levels at roughly 12 times forward-looking earnings.

Could This Drug News Be a Catalyst for This Big Pharma Stock?
410%