Just when the Aduhelm controversy started to settle down, Biogen (NASDAQ:BIIB) disappointed again for what it was hoping was its next big hit. Tofersen, its investigational RNAi drug for amyotrophic lateral sclerosis (ALS), perhaps better known as Lou Gehrig's disease, didn't quite produce results as hoped last week. On top of this setback, sales are slipping.

With a market cap of nearly $40 billion, the pharmaceutical company came up empty-handed in a phase 3 study evaluating the efficacy and safety of tofersen in adults with a specific mutation called SOD1, which affects about 2% of patients with the progressive neurodegenerative disease. There was no effect on clinical function or respiratory function, and with 5.6% of patients having serious neurologic adverse events in the treatment group versus zero in the control group, things are looking bleak for tofersen's future. 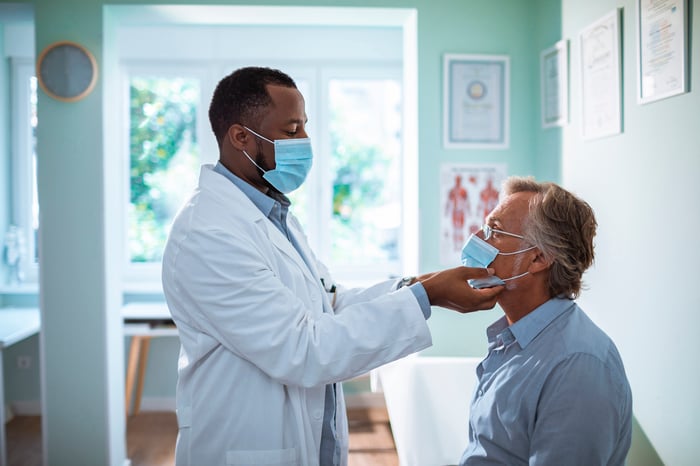 At a companywide level, sales are continuing to erode, too, down to $2.78 billion in the third quarter of 2021 from $3.38 billion in the year-ago quarter. It all starts with weakness in its core multiple sclerosis (MS) market, where the company has long flourished. Sales of its blockbuster Tecfidera have seen fierce generic competition, with sales dropping from $1.18 billion in Q2 2020 to just $499 million in the most recent quarter. Interferon sales have slumped as well, with revenue dropping from $474 million in Q3 2020 to $438 million in Q3 2021. On the bright side, Biogen is holding out hope that its newest MS product, Vumerity, can be a blockbuster. The orally available drug hit the market in late 2019, and while initially sputtering through the pandemic, Vumerity has generated $121 million in Q3 sales, up from just $15 million in 2020. If Biogen is right and Vumerity approaches blockbuster status, the MS franchise may not melt away due to generic competition. Instead, it might actually stabilize over the next few quarters, although I am not certain Vumerity can fully make up for losses sustained from Tecfidera generic competition.

Things are not looking up for its rare disease treatment Spinraza, either. Biogen's treatment for spinal muscular atrophy (SMA) saw just over a 10% decrease in revenue year over year for the quarter, bringing in $444 million. Novartis' gene therapy Zolgensma will likely continue to play a role in the erosion of Spinraza sales. The Swiss pharmaceutical giant saw revenue for its SMA therapy increase 48% on a constant currency basis to $315 million for the most recent quarter. At this rate, it may not be long before Novartis takes the lead in the SMA market, further cutting into Spinraza sales.

Biogen's biosimilars franchise has seemingly leveled off, too, with sales essentially flat at $203 million for the quarter. With peak sales of brand-name drugs Humira, Remicade, and Enbrel of $20 billion, $7 billion, and $7.2 billion, respectively, there seems to be room to grow for Biogen's three approved biosimilars: Imraldi, Flixabi, and Benepali. And this is not counting the other three biosimilars in its pipeline -- clones of Lucentis and its $3.9 billion in 2019 sales, Actemra and its $2.3 billion in 2019 sales, or Eylea and its $8.3 billion in 2020 sales. While the biosimilar space is a fiercely competitive market with multiple generic alternatives, there always seems to be a continued push to rein in drug costs, and because of this, the struggling pharma's biosimilar franchise seems well positioned to benefit.

Not all is bleak, as Biogen still has other shots on goal in big markets. Despite only $300,000 in Aduhelm sales, the company's Alzheimer's story has not yet fully played out. With a $10 billion-plus addressable market at stake for Aduhelm, Biogen is committed to generating additional evidence on its Alzheimer's treatment. Recognizing it has some work to do, several additional Aduhelm studies are underway, plus it has additional Alzheimer's targets in the pipeline. With few options for Alzheimer's patients, any positive data will be welcomed with open arms by clinicians, and both patients and shareholders could reap benefits.

Despite a recent failure in its ALS pipeline, Biogen still has two bright stars in development. A phase 2a study of BIIB131 for acute ischemic stroke demonstrated positive impacts on blood vessel reopening and patient functional recovery when given up to 12 hours from onset of symptoms. The current clot-buster utilized in acute ischemic stroke, Roche's Activase, generated $1.27 billion in revenue in 2020, paving the way for BIIB131 to step in and become a blockbuster if these trial results are replicable. Biogen also has a 50-50 partnership inside the U.S. with Sage Therapeutics for a late-stage major depressive disorder therapy called Zuranolone. Thus far, the treatment has demonstrated a rapid relief of symptoms as early as day 3 with sustained responses at day 42. With over 17 million people diagnosed with the disorder in the U.S. alone, this market could be huge, and easily up to a $10 billion opportunity for Biogen.

While Biogen has multiple avenues for growth, it also needs a lot to go right. Zuranolone previously flunked a pivotal trial for depression last year. It's unclear where BIIB131 would fit in with endovascular therapy -- i.e., mechanical clot removal rather than breaking up the clot with medication. Vumerity looks to have a bright future but seems unlikely to gain back all of the inevitable losses from generic competition in the MS field. Not to mention that Biogen carries $7.3 billion in debt with only $3.9 billion in cash and securities, plus free cash flow decelerated from $1.16 billion in Q2 to $763 million this quarter.

With a price-to-sales ratio of 3.54, Biogen is valued higher than Bristol-Myers Squibb and GlaxoSmithKline, with P/S ratios of 2.89 and 2.2, respectively. Not to mention that Glaxo pays a 5.5% dividend and Bristol pays 3.3%, compared with none from Biogen. Given its valuation and the uncertainty of future revenue streams, healthcare investors may want to watch this play out a bit more before adding Biogen to their watch list.