Please ensure Javascript is enabled for purposes of website accessibility
Free Article Join Over 1 Million Premium Members And Get More In-Depth Stock Guidance and Research
By Taylor Carmichael - Oct 27, 2021 at 6:55AM

Shares of Novavax ( NVAX -0.19% ) have been extremely volatile as the market tries to value the company's COVID-19 vaccine. In January of last year, the company's stock was valued at $4 a share. The stock zoomed higher when COVID-19 hit, the tiny company introduced its vaccine candidate, and saw early success in clinical trials. After the biotech reported positive phase 3 data earlier this year, the stock hit $330 a share.

Since then the stock has crashed about 60%, falling to a recent price of $134 as of this writing. Why has the stock been so volatile, and where will it go next? Let's dig in. 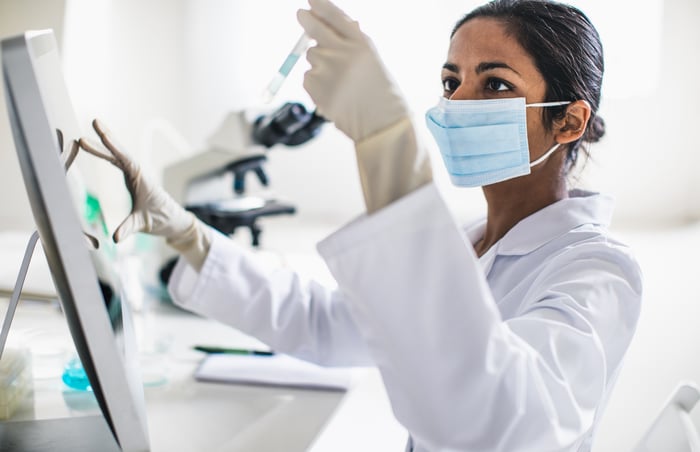 Why many investors are bullish on Novavax

This was huge news, because the company had already been very busy signing up buyers around the world. Multiple countries have now pre-ordered Novavax's vaccine, including the U.S., the UK, the EU, Australia, Canada, Japan, and Korea. COVAX, the global effort to supply vaccines to the world, has ordered 1 billion doses of Novavax's vaccine.

The biotech is planning to manufacture 2 billion doses of its vaccine in 2022. Novavax has already filed for an emergency use listing with the World Health Organization (WHO), which will allow the company to start distributing its drug to COVAX, where its desperately needed in the developing world.

Crashing since the phase 3 trial news

Manufacturing delays have been a major culprit behind the stock's decline. According to a report in Politico last week, some of the biotech's manufacturing partners have been struggling with purity issues with the vaccine as they try to scale up. Drug companies obviously want to avoid impurities in the manufacturing process, so that the vaccines that are mass produced are as effective as the drugs that are tested in clinical trials.

Novavax also failed to file for Emergency Use Authorization (EUA) from the U.S. Food and Drug Administration (FDA) in the second quarter and in the third quarter of this year. With each delay, the stock has taken another hit. The Politico article suggested that Novavax will not solve its manufacturing issues until "the end of 2022." The article cites anonymous sources in the U.S. for its opinion. Novavax management subsequently released a letter disputing the validity of the article.

Now we're in the fourth quarter, and Novavax is finally filing for emergency authorizations around the world. In addition to its filing with WHO, the biotech recently filed for authorization in India, Indonesia, and the Philippines. Over the next few weeks, Novavax will file for emergency use in Europe, Australia, the UK, Canada, and New Zealand. And the company expects to file its EUA in the U.S. by the end of the year.

When there's a negative article about one of your stocks in the media, the last thing investors should do is sell in a panic.

Right now the clear winners in the vaccine race are Moderna ( MRNA 0.48% ) and Pfizer ( PFE -0.71% ). These companies are not just ahead of Novavax -- they're ahead of everybody. But there's a reason for that. Moderna has successfully marketed a highly effective mRNA vaccine, and Pfizer, thanks to its partner, BioNTech ( BNTX -3.41% ), has also gotten its mRNA jab in millions of arms.

These companies' successes don't mean investors should run out and sell their Novavax shares. The market is well aware that the mRNA vaccines are moving fast, and that there are other potential vaccines in the works that could prove useful in fighting the pandemic. That's why Moderna is enjoying a $139 billion market cap right now and BioNTech has a $70 billion valuation.

Novavax's shares are already selling at a steep discount. Its market cap is under $10 billion, and the disparity between this and other COVID vaccine producers' market caps reflects the speed by which the mRNA vaccines have zoomed ahead. But Novavax is still very close to the finish line. It's unlikely that Novavax would have filed with WHO unless it was confident its vaccine would get authorization.

I have a lot of confidence in Novavax. The company has published its COVID vaccine data in The New England Journal of Medicine, a validation of the biotech's science. The company's reported phase 3 data for its COVID-19 vaccine is outstanding. And despite not having an mRNA vaccine, Novavax is very much in the lead for a flu/COVID combo jab. There's also the possibility the Novavax's vaccine will serve as a much-needed booster shot.

Can Novavax and its manufacturing partners finally clear this last hurdle and get the purity issues resolved for mass production? I think it's more a question of "when" than "if." While all the manufacturing delays have caused a crash in the share price from its highs, the company's science is still top-of-the-line. And the future remains very bright for this vaccine hopeful.