A week ago, Bitcoin's (CRYPTO:BTC) wild ride brought the cryptocurrency to an all-time high price of more than $66,000 per coin. That culminated a three-week run that saw gains of more than 60%. Ethereum (CRYPTO:ETH) similarly soared about 75% in that time period. Uniswap (CRYPTO:UNI), the Ethereum-based decentralized exchange, also has been on the upswing. But those gains have reversed course, and as of 2:15 p.m. EDT today, each were down as follows:

The run to Bitcoin's new high came as cryptocurrency investors anticipated the launch of the first Bitcoin futures exchange-traded fund (ETF) last week. Once ProShares Bitcoin Strategy ETF launched, though, it seems investors began selling on the news. There was another catalyst for today's drops, however. 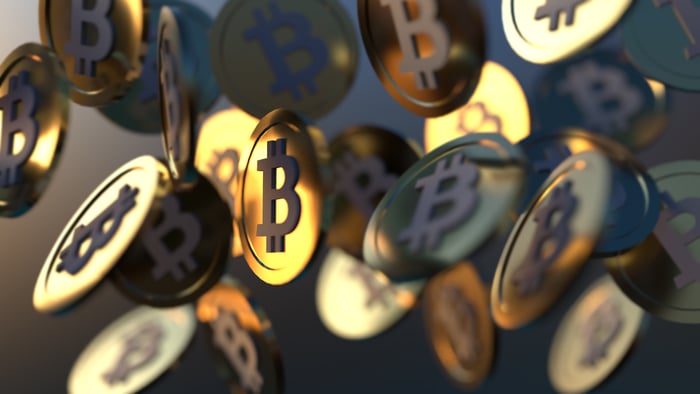 Some of the enthusiasm for the first Bitcoin EFT was tempered when popular Bitcoin supporter Mark Cuban told CNBC he wouldn't be investing in it. Cuban said he would simply rather buy it directly. That in itself, of course, wouldn't really limit any interest in Bitcoin. And the cryptocurrency also got some added publicity earlier this week when football legend Tom Brady said during ESPN's Monday Night Football broadcast that he had given the fan who returned his 600th touchdown football a Bitcoin token as partial reward.

Robinhood co-founder and CEO Vlad Tenev pointed to several things to explain the drop. But one concerning item was the regulatory uncertainty of the sector. In the conference call for investors, he said, "The regulatory environment in terms of new coins and lending products and crypto is uncertain and evolving."

Much of the cryptocurrency interest has been based on momentum over the past year. Mark Cuban or Elon Musk makes a comment and traders flock to buy the next day, or so it seems. So with uncertainty comes fear. Robinhood's CFO added that looking ahead, revenue from cryptocurrency trading is very difficult to predict.

Those comments, along with the significant decline in Robinhood's related revenue, are likely what pushed the cryptocurrency sector down today. Investors in the space should be used to volatility, however, and there is very likely much more to come.