In the 3D printing company's third-quarter earnings report, investors should focus on launch plans for the Production System P-50, along with the usual headline numbers.

Desktop Metal (DM -0.56%) is slated to report its third-quarter 2021 results after the market close on Monday, Nov. 15. An analyst conference call is scheduled for the same day at 4:30 p.m. EST.

Last quarter, Desktop's top and bottom lines met Wall Street's expectations. Its release of its results, however, was overshadowed by its announcement that it was acquiring The ExOne Company (XONE), which is focused on metal 3D printing. This topic is discussed below.

Desktop Metal's management has not been providing organic revenue growth, which excludes contributions from acquisitions made within the last year. And the company has been making many acquisitions since going public last December via a special purpose acquisition company. Therefore, investors don't have quantitative data about how the company's internally developed metal 3D printing product portfolio is performing in the market.

With this background in mind, here's what to watch in Desktop's upcoming report. 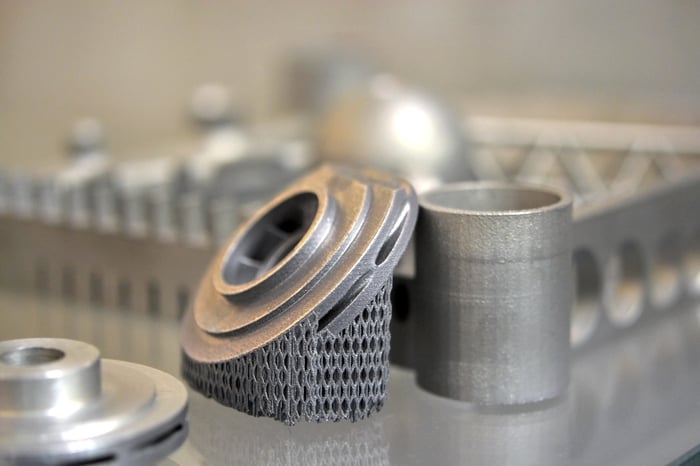 Following are Wall Street's estimates and the company's results for the prior quarter to use as benchmarks. (This chart would typically provide year-ago results rather than prior-quarter ones, but Desktop Metal wasn't publicly traded at that time.)

For some context, in the second quarter, the company's revenue surged 767% year over year to $19 million. This result (which includes an undisclosed contribution from acquisitions) was in line with Wall Street's expectation of $19.1 million.

Adjusted for one-time items, last quarter's net loss narrowed 5% year over year to $21.4 million. This translated to loss per share narrowing 43% from $0.14 to $0.08, about in line with the loss per share of $0.09 that analysts had anticipated. (The share count increased substantially when the company went public, which explains the percentage change differences between the net loss and the net loss per share.)

In last quarter's earnings release, the company said that its "Production System P-50 [is] on track to begin shipments in [the] fourth quarter of 2021." The P-50 is the company's reportedly very speedy flagship metal 3D printing system geared to higher-volume manufacturing applications. It uses the company's proprietary single-pass binder-jetting technology.

Management has been saying since at least early this year that this system would launch in the latter part of 2021. So, it seems probable that investors will punish the stock if the launch is delayed.

For Desktop shareholders, a key positive of the acquisition of ExOne, which is expected to close in the fourth quarter of this year, is that buying out a competitor eliminates them as a competitor. ExOne is probably Desktop's most direct competitor in metal 3D printing, as the companies both use binder-jetting technology. However, their specific technologies are different, with the CEOs of both companies emphasizing on Desktop's Q2 earnings call that the companies have complementary technologies, materials, and go-to-market strategies.

A drawback for Desktop shareholders is that the acquisition will dilute their ownership percentage because the company plans to finance about two-thirds of the approximately $575 million acquisition price through the issuance of new shares.

Any material changes to guidance will probably move the stock.

Last quarter, management again reiterated its revenue outlook issued earlier in the year, which excludes the impact of the ExOne acquisition. For 2021, it still expects revenue of over $100 million and projects that it will exit the year with an annualized revenue run rate of $160 million, again, excluding the contribution from ExOne.

It also guided for 2021 earnings before interest, taxes, depreciation, and amortization in the range of negative $80 million to negative $70 million, excluding the effects of the ExOne acquisition.