The benchmark S&P 500 index is back at all-time highs after a paltry 5% dip during the September and October market sell-off. Investors who were hoping for a more attractive buying opportunity might be disappointed, but Wall Street thinks there's still enormous value to be found.

Individual stocks don't move equally, or even at the same time as each other, so new opportunities tend to present themselves no matter what the broader market is doing. As long as the focus remains on buying quality businesses with bright futures, history suggests the rewards will flow over the long term.

The following two stocks have a strong vote of confidence from Wall Street analysts, paving the way for 50% to 123% returns. 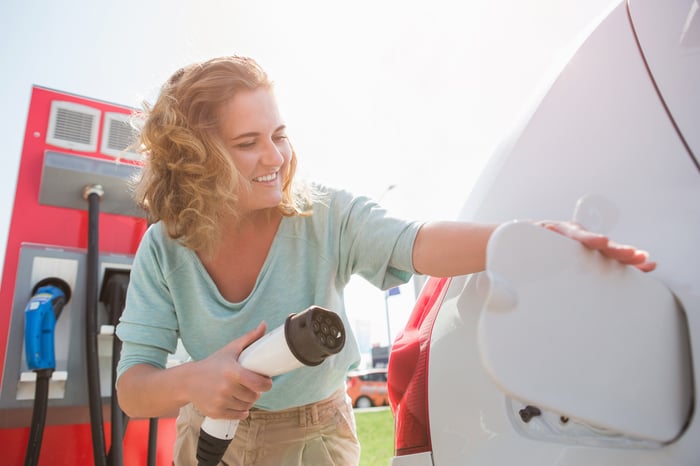 Of all the innovative consumer products hitting the market, few are as exciting as electric vehicles and the technology that comes with them. Aside from the clear environmental benefits, these cars are setting new standards for performance and comfort, and Tesla (NASDAQ:TSLA) is widely regarded as the market leader.

The company has made a habit of proving the doubters wrong, and just hit a $1 trillion market valuation  thanks to a supply deal with rental car company Hertz. That doesn't mean there isn't upside left, however, with the highest price target on Wall Street pointing to $1,591 a share.

Tesla is delivering remarkable growth that might make that lofty estimate an inevitable reality in the not-too-distant future. Over the last 12 months, it has delivered more than 800,000 vehicles to customers, which is almost double the figure from the same time last year (on a trailing-12-month basis).

The real driver of investor optimism is the company's rapidly improving profitability. Manufacturing cars is a complex, expensive business, so achieving scale is extremely important. The more cars Tesla can make, the smaller its fixed costs become as a portion of overall revenue. In the third quarter, the company delivered a 30.5% automotive gross margin -- the highest level in at least three years.

With the opening of its new Texas gigafactory this year, followed closely by its Berlin location in early 2022, Tesla investors have plenty to be excited about. Over the long term, I think share price growth should far exceed 50%. The long-standing popularity of computer and console gaming is well documented, but the mobile gaming market is now larger than both of them combined. It's set to surpass $100 billion in size by the end of this year, and innovators like Skillz (NYSE:SKLZ) are supercharging its growth.

Typically, only 2% of game developers actually experience success, which means the odds of a breakthrough are slim for most independent studios. Skillz has developed a platform that stands as a market for the other 98% to monetize their games. Users can pay money to enter competitive tournaments with cash prizes going to the winners, after a cut is taken by both Skillz and the developer.

The data shows that players are spending twice as much time on Skillz compared to the gaming industry average, with developers experiencing fourfold revenue growth after joining the platform. It's one of the reasons the Wall Street-high price target sits at $25, representing 123% growth from the current price of $11.17.

Skillz isn't profitable yet and it likely won't be for some time. It's investing heavily in growth, including key acquisitions and strategic partnerships designed to acquire new users and bolster its technology. But perhaps the company's largest challenge is attracting high-profile games to its platform, as its current offering consists of various iterations of solitaire, bowling, pool, and other assorted generics.

Back in February, Skillz made the welcome announcement that it's partnering with the NFL to run a competition for developers, who will battle it out to deliver the best NFL-themed mobile game they can build. It's a step toward a more mainstream product portfolio for the Skillz platform.

The company is still quite small at just $4.5 billion, and with the support of behemoths like the NFL, it could well surpass Wall Street's $25 price target over the long run.