Last week, the world's largest audio platform, Spotify (NYSE:SPOT), announced that it is rolling out the ability for podcast creators to include videos in their shows. Though Spotify has long been focused purely on the world of "audio," this move will allow users to engage with Spotify more actively and puts the company in more direct competition with Alphabet's (NASDAQ:GOOGL) (NASDAQ:GOOG) YouTube. Let's see whether or not this move should pay off. 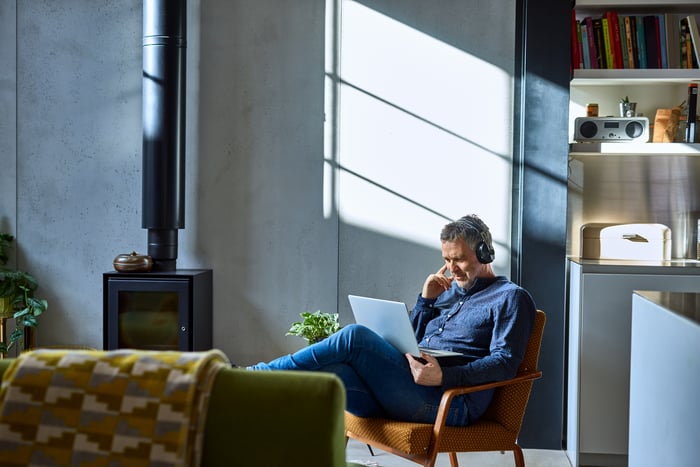 What did the announcement entail?

Before diving into why video capabilities could be an important tool for Spotify, it's probably best to dissect the actual announcement.

After testing videos through some of Spotify's original and exclusive shows like The Joe Rogan Experience, the company decided that it is going to slowly roll out the same functionality to creators on Anchor -- the podcast creation and distribution service that Spotify acquired for roughly $140 million in 2019.

Previously, Anchor allowed podcasters to easily upload, edit, and publish their audio files to all the major streaming platforms, but following this rollout, those same creators will have the ability to include a video file as well. However, since Spotify is the only podcast platform that's currently capable of integrating the videos, viewers will have to be either free or paid Spotify users in order to access it.

While it might seem trivial to introduce this feature to a single podcast distribution platform, Anchor is actually responsible for powering 70% of all the podcasts available on Spotify. So, even though the rollout will be gradual and creators currently have to apply to be on the waiting list, the majority of podcasts in the world should ultimately have access to this feature.

Additionally, the video compatibility will be extended to different types of devices so users can watch or listen wherever they enjoy it most. This includes mobile, desktop, smart TVs, and even gaming consoles.

Traditionally, the user experience for Spotify has always been quite passive. Users can listen to their favorite podcasts or music while they work out, during their commute, or anytime they're on the go and don't need to be actively engaged to enjoy the experience.

However, not all users interact with the app this way. In fact, in Spotify's press release, the company mentioned, "We've found that our users want the option to easily switch between audio only and video depending on where they are, what they're doing, and what they're enjoying." Not to mention, videos can also help deepen the connection between a creator and its audience. Anchor made this clear in its announcement when it mentioned that creators will even soon have the option to put their video content behind a paywall.

But this announcement doesn't just benefit existing podcasters. It should also help attract new shows to the platform since there's no other place where creators can easily give 365 million monthly active users access to both a passive and active listening experience.

While it's hard to know how exactly adding video capabilities will impact Spotify's financial performance, it's probably fair to assume that a visual component makes the ad inventory on podcasts more valuable to advertisers. This goes hand in hand with CEO Daniel Ek's recent comments on the latest conference call when he stated, "It's clear to me that the days of our ad business accounting for less than 10% of our total revenue are behind us". Ek's comments followed the second quarter's astounding growth in podcasting where revenue increased by nearly 700% versus the year prior, and by almost 200% when excluding inorganic growth.

Between Spotify's consistently increasing supply of shows, its automatic ad-insertion capabilities, and the recent expansion of self-serve ads to businesses of all sizes, investors should expect to see sustained growth in Spotify's advertising revenue over the coming years.