You might want to avoid stuffing your portfolio with them.

With the market near all-time highs, conversations around the Thanksgiving table may naturally turn to stocks. No doubt most who've paid attention will marvel at the climb of meme stocks, cryptocurrencies, and companies trading for multiples of their historic valuations.

Yet not all companies are performing well. Many have seen earlier stock gains go up in smoke. But that doesn't mean they are a bargain. That's why we asked three contributors to Fool.com which stocks they think investors should avoid heading into next month. They chose Novocure (NVCR -0.12%), Amwell (AMWL -2.59%), and Novavax (NVAX -1.17%). Here's why. 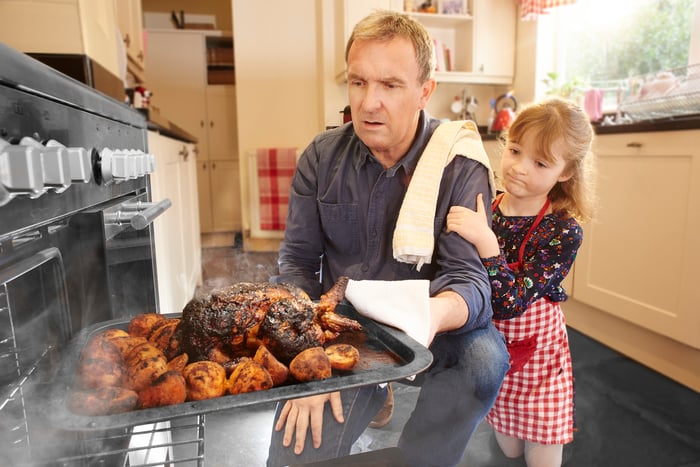 Jason Hawthorne (Novocure): The idea behind Novocure is both noble and revolutionary. The company's therapy is known as tumor treating fields (TTF). It's an alternating electric field that is designed to impede cancer cells' ability to divide while sparing healthy tissue. And it works. The company's treatments for a form of brain cancer, as well as mesothelioma, are approved by the Food and Drug Administration (FDA). They generated $546 million in revenue over the past 12 months.

But after being up 168% from the beginning of the pandemic, Novocure stock is now down 55% from its all-time high set in June. 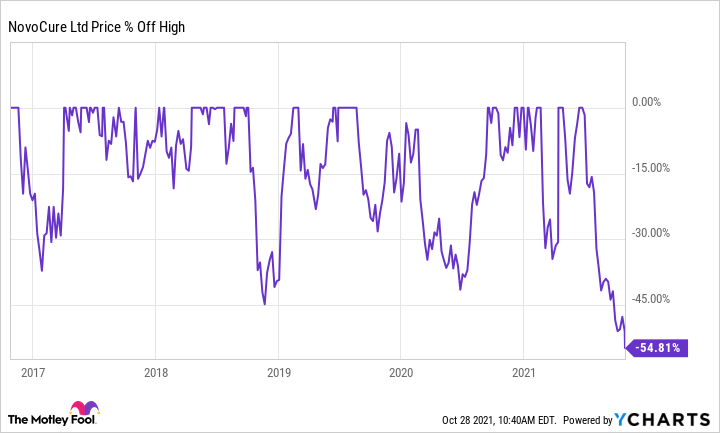 That's because growth has slowed significantly. And investors are now wondering if the scientific breakthrough will translate to much more commercial success.

In the just reported third quarter, revenue was less than 1% higher than the same period last year. And active patients and prescription volume wasn't much higher. It confirms what management has previously acknowledged. After being approved in 2011, Novocure's existing treatments are entering a maturing market. There is only so much growth opportunity left.

In addition to geographic expansion -- something management has pointed out as an opportunity for growth -- the company is targeting additional forms of cancer. That adds to its potential. Along with earnings, management announced that enrollment was complete for its phase 3 study of platinum-resistant ovarian cancer. The company also has ongoing studies for treating pancreatic, liver, and gastric cancer.

After the drop in the stock, it now trades for about 19 times sales. It's above last year's lowest price-to-sales (P/S) ratio of 15. But it is far below the 40-plus P/S ratio it traded at earlier this summer. Despite the discount, it's clear Novocure's disruptive approach will take time to commercialize. With growth grinding to a halt, it's understandable that investors are taking a wait-and-see approach. I expect the stock will continue drifting lower until its TTF treatment is approved for new indications.

A telehealth stock struggling to maintain its pandemic momentum

Rachel Warren (Amwell): It's been a particularly volatile period for stocks across just about every sector of late, and even the traditionally resilient healthcare industry hasn't totally been spared. As a healthcare writer, I love to cover these kinds of stocks and I think there are so many fantastic companies in this industry that are incredibly compelling buys for long-term investors.

It's no secret that the multi-billion-dollar telehealth market is growing quickly as more providers are adopting these solutions and consumers are increasingly seeing the benefit in virtual healthcare options. But if I had to pick one stock within this sector that may not be the best use of your money this month, I'd have to go with Amwell. The telehealth company has been in business since 2006 and just made its public debut last September. Since that time, shares of Amwell are trading down by about 60%.

Now, I'm the first to say that share price alone doesn't make or break a fundamentally great business. My concern with Amwell is the pace at which it's growing its business. Both active providers and total visits on its platform were down quarter over quarter in the second quarter of this year, while revenue grew by a slim 5% year over year. Amwell cited a decrease in "COVID-focused providers" and a "typical decline of urgent care visits entering the summer period" as the reasons behind these declines.

However, its competitor and market leader Teladoc Health had no such issues in the second quarter. In fact, visits on its platform rose 28% compared to the second quarter of 2020, during the pandemic's first wave.

In 2020, total visits on Amwell's platform jumped 436% from the prior year. And in the first quarter of 2021, it reported that total visits were up 120% year over year. While a certain slowdown would be expected as the world reopens, the company seems to be struggling to maintain its momentum.

I'm not saying that Amwell can't regain more optimal footing in the telehealth space. But with more entrants in this industry than ever and Teladoc continuing to maintain its impressive foothold on this lucrative industry, Amwell has a lot of catching up to do if it wants to remain competitive. If you're hunting for a top telehealth stock to buy right now, Teladoc may be a smarter play for long-term investors.

Steve Ditto (Novavax): In the race to develop COVID-19 vaccines, the Trump administration authorized $1.6 billion in payments to Novavax for 100 million doses. That's more money than any other vaccine maker received as part of Operation Warpspeed. Despite the massive advanced payment, Novavax was slow to ramp up clinical trials last year and there are still many questions as to whether Novavax will be able to get its vaccine to market.

The initial holdup appeared to be a combination of supply shortages and challenges in getting contract manufacturing partners up to speed. The delays essentially cost Novavax any chance of serving the early U.S. market. To support a global ramp-up in production, Novavax secured large manufacturing contracts with the Serum Institute of India, SK Biosciences of South Korea, Fujifilm Diosynth and GlaxoSmithKline in the U.K., and Jubilant HollisterSteir in Spokane, Washington.

The company disclosed its troubles in the last quarterly report and discussed the challenges in its earnings call. As Novavax's chief commercial officer John Trizzino stated: "We're not making aspirin. We're making a very complicated biological."

New concerns flared up last week when an article in Politico cited government sources who expressed continuing concerns about the ability of Novavax to meet stringent quality standards. Echoing earlier statements from the company, the Politico article reported "They rushed the process," one of the people with knowledge of the matter said. "It's hard to make. And they can't make it."

The market has taken notice of the latest travails sending Novavax stock price down more than 45% over the last month compared to the S&P 500 which is up almost 3%. Novavax is scheduled to report Q3 earnings Nov. 5 and analysts will no doubt be looking for definitive signs of progress. Things to watch for on the call include evidence of successful production by the partners, definitive production schedules in 2022, and further progress on combination flu and COVID-19 vaccines.

If Novavax can turn the corner on its COVID-19 vaccine production, there will be much brighter days ahead for both investors and the billions of people globally who need a vaccine. If you're an investor with a penchant for turnaround stories this may be the stock for you. In the meantime, investors with a lower risk tolerance may want to sit this one out until we can learn more.