This high-flying growth stock has had a meteoric rise, but investors can get on board for a fraction of the share price.

PayPal (PYPL 2.16%), a pioneer in online payments, has an interesting history with roots that date back to 1999 when none other than Elon Musk ran the company that would become PayPal. In 2002, PayPal went public at $13 per share, but its time as a public company was short-lived as eBay bought it later that same year.

But PayPal would again become a public company in 2015 when it was spun off from eBay. PayPal began trading on the Nasdaq Stock Exchange on July 20, 2015, at about $41 per share. More than six years later, it has pretty much been on a rocket ship, with a total return of around 480% and an annualized return of roughly 31%, as of Oct. 28. The stock is currently trading at around $233 per share and, as the leader in the growing mobile payments industry, it should continue its robust growth. The good news for folks that don't have the capital to buy shares of this stock right now is that they can invest in PayPal for the cost of a penny stock through fractional shares investing. 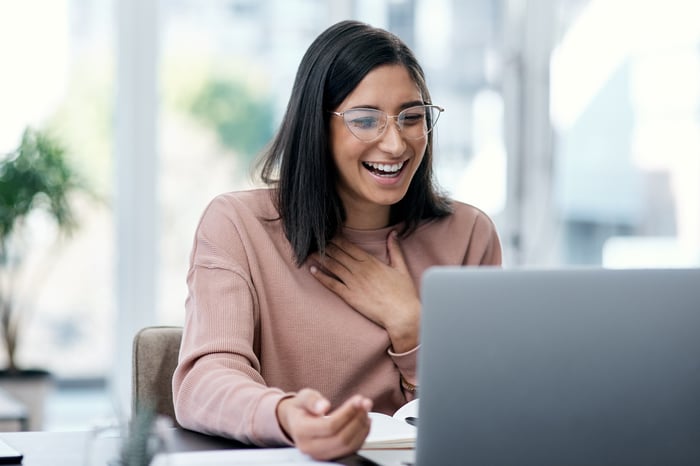 PayPal has been one of the best growth stocks on the market over the past few years. The company is at the forefront of the digital payment revolution, as both merchants and consumers gradually move from cash to mobile and online payments. This trend has been accelerated by the pandemic, as more people shopped online and used contactless payment options. A 2020 study by Pew Research found that one-third of U.S. adults don't use cash during the week. That number will only grow over the next 10 years, 20 years, and beyond. According to Markets and Markets research, the global digital payments market is anticipated to grow at an annual rate of 14.2% between 2020 and 2025.

PayPal is perfectly positioned to ride this wave, as it is not only the largest digital payment company, it also pretty much invented the concept of online payments and was certainly a pioneer in the space. It has massive name recognition, and the number of users has climbed exponentially. As of June 30, it had 403 million active accounts, a 16% increase year over year. The number of payment transactions jumped 27% year over year to 4.7 billion, while the total payment volume (TPV) climbed 40% to $311 billion in the most recent quarter. A big component of PayPal's growth in recent years has been the Venmo mobile payment app, which saw a 58% increase in TPV to $58 billion in Q2.

By 2025, the company expects to almost double its number of active users, setting a target of 750 million. It also projects that it will double annual revenue from its current, anticipated $25 billion for 2021, to more than $50 billion in 2025, with annual free cash flow doubling to more than $10 billion. With strong cash flow, PayPal has over $19 billion in cash and cash equivalents with relative low debt -- roughly $9 billion. It has enabled PayPal to fund its growth through acquisitions, like Paidy -- a buy now, pay later provider in Japan -- and through initiatives like its new PayPal app, which bundles all of its services in one app.

Get on board the PayPal train

PayPal's stock price has shot up to around $233 per share since it went public a second time in 2015. For some investors, particularly those new to the space who may either be priced out of such a high entry point, or uncertain about allocating big chunks of capital to a stock right off the bat, fractional shares are a great option.

Many brokers now offer this option, which allows people to invest by dollar amount, not just by share price. So instead of laying down over $1,100 for five shares of PayPal, you could dip your toe in with an initial $100 investment, which would buy you about 43% of one share at its current price, and then add more over time.

You could even treat it like a penny stock, investing just a few bucks to start, if you were so inclined. PayPal would be an excellent place to start as it is a market leader that still has huge growth potential in a booming industry.

3 Reasons I Plan to Avoid Selling My Stocks Until Retirement