Yet almost as important as the menu changes are to the fast-food king's success is that customers aren't just hitting the drive-thru for their meals as they did during the early stages of the pandemic, but are coming inside once again for a dining out experience.

That could give McDonald's a competitive edge as it's best able to meet customers where they want to eat.

The Golden Arches said third-quarter sales of $6.2 billion were up 14% over the same period last year when it was still relying heavily upon its "3 D's" strategy of digital, delivery, and drive-thru. The restaurant said its average check rose during the period on a combination of customers ordering more food per visit and higher menu prices.

It was also helped by the boost given from its entry into the chicken sandwich wars. Although very late to the game, McDonald's seems to have made up for lost time by introducing a worthy special to the menu.

It also seems to be drawing customers back to the chain, too, because comparable-store sales were up 9.6% in the U.S. and 12.7% globally. On a two-year basis, comps were almost 15% higher in the U.S., up 9% across most of Europe, and almost 5% higher in Japan and Latin America. 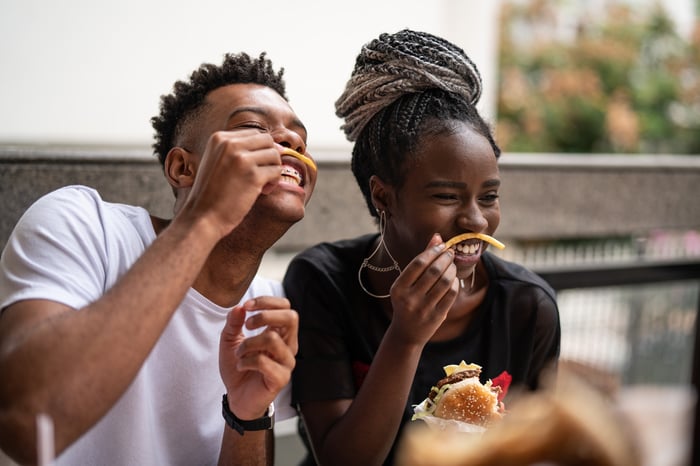 While the 3-D strategy undoubtedly still played an important role in the sales increase, McDonald's seems to have been able to lure many customers back to its restaurants to sit down in its dining rooms again.

Mobile-device location data from analytics company Placer.ai found that although foot traffic to the burger joint see-sawed a bit over the quarter, it has largely regained parity with 2019.

Where visits to the chain had been down by a third in January compared to the same month in 2019, they were virtually flat in July. By August, store visits were slightly ahead at 1.5%, while in September that figure dipped 1.2% below the two-year comparison.

Placer.ai's vice president of marketing Ethan Chernofsky said, "The ability to maximize and harmonize the experience across channels has been a key strength for McDonald's to this point and will likely continue to provide an advantage moving forward."

McDonald's faces its own labor issues as the "Fight for $15" crowd of labor activists organized a one-day strike in May to protest over alleged sexual harassment claims and low wages, and the tight labor market makes it more difficult to find good workers.

Fortunately, the restaurant stock has been investing heavily in technology, which helped it get through the worst of the pandemic and could eventually serve as a way to offset the demands of a fickle labor market.