Shiba Inu is all bark and no bite when compared to these high-growth companies.

For well over a century, stocks have been investors' best bet to build life-changing wealth. Even though the stock market won't outperform housing, gold, or bonds every year, it's delivered the highest average annual return over the past century.

However, the dominance of stocks has been tested in a big way in recent years by the emergence of cryptocurrencies. Many of the most-popular digital tokens have lapped the benchmark S&P 500 many times over. Arguably leading that charge of late is meme coin Shiba Inu (SHIB -4.99%). 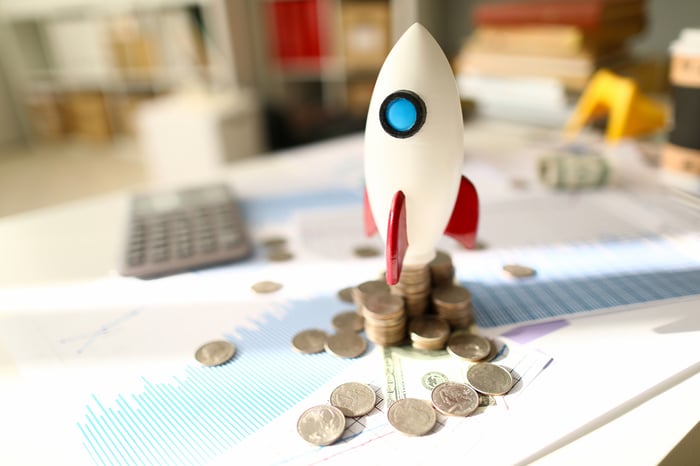 Shiba Inu has soared, but it's all bark and no bite

There's no one specific reason for SHIB's jaw-dropping returns. It looks to be a combination of:

While Shiba Inu has, thus far, been unstoppable, history (and a half-dozen figures) would suggest its due for a massive correction and may not have staying power.

For example, SHIB has virtually no use off of a cryptocurrency exchange. Online business directory Cryptwerk notes that fewer than 100 merchants are willing to accept SHIB tokens as a form of payment. That's embarrassingly low for the 12th-largest cryptocurrency in the world.

Equally disturbing, data from leading crypto exchange and ecosystem Coinbase shows that the typical holding time for Shiba Inu is a mere 16 days. Such a low figure suggests that day-traders and momentum chasers are in charge, which means there's little true conviction in SHIB's long-term prospects.

And, of course, there's no overlooking that Shiba Inu offers no competitive advantages. There's nothing particularly special about its processing time or transaction fees that'll allow it to stand out in the payment's space. 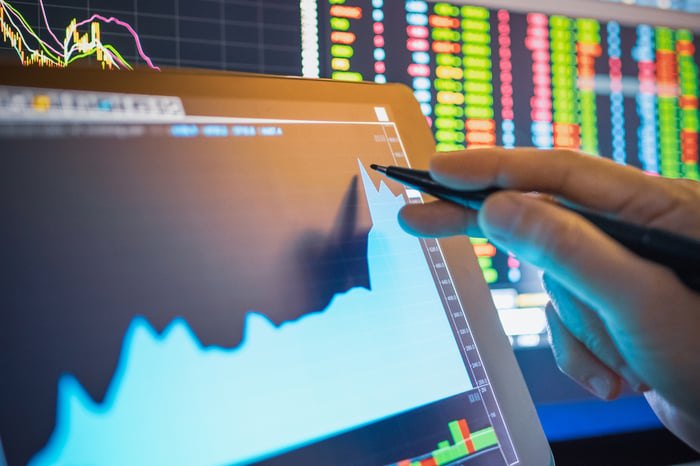 These supercharged stocks can crush Shiba Inu by 2026

All of these deficiencies lead to one conclusion: SHIB's longer-term prospects are poor.

Instead of putting your money to work in a hyped-up meme coin with no future, I'd suggest investing in the following four supercharged stocks, all of which can run circles around Shiba Inu over the next five years.

One brand-name company with supercharged growth potential that can leave Shiba Inu eating its dust is stay-and-hosting platform Airbnb (ABNB -5.57%).

What makes Airbnb so special is its efforts to completely upend the traditional hotel and travel industries. Bookings for stays climbed more than 400% in the three years ending Dec. 31, 2019, and it now has more than 4 million homeowners offering their properties for stays on the platform. In general, Airbnb stays are cheaper, more convenient, and offer more privacy than traditional hotels.

Interestingly, the company's fastest-growing segment is long-term stays, which are defined as rental periods of at least 28 days. As workforces become more mobile in the wake of the pandemic, these high-margin long-stay individuals could become Airbnb's key growth driver.

In addition to challenging the hotel industry, the company's Experiences segment aims to redefine what travelers do while away from home. By partnering with local experts and businesses, Airbnb can add on sales beyond just stay bookings.

It's a true disruptor that shouldn't have any issue outperforming Shiba Inu. 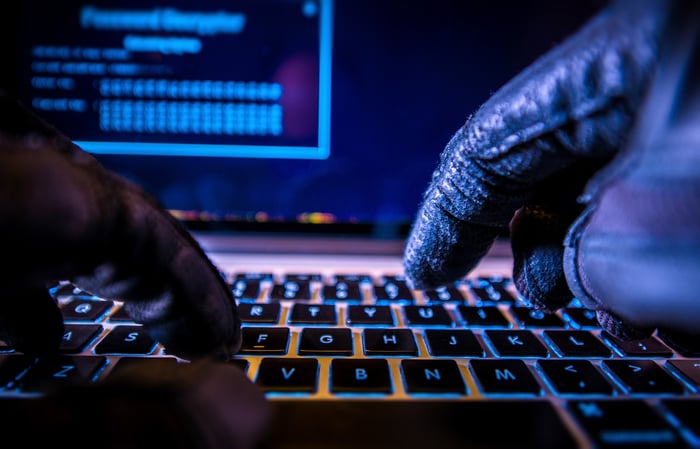 Another supercharged growth stock that has the potential to run circles around Shiba Inu over the next five years is Ping Identity (PING).

Ping Identity is a cybersecurity stock focused on identity verification solutions. The company's cloud-based platform leans on artificial intelligence to grow smarter and more effective at identifying and responding to potential threats over time. It works hand-in-hand with on-premises security solutions to provide more thorough monitoring once users have gained access to sensitive data.

The great thing about cybersecurity is that it's evolved into a basic-need service. No matter how well or poorly the U.S. economy is performing, hackers and robots don't take a day off. This means double-digit growth should be the expectation moving forward for Ping.

What's more, Ping Identity is benefiting from the juicy margins that accompany subscription revenue. Between its term-based license subscriptions and its much faster-growing software-as-a-service subscription, Ping has consistently generated a gross margin of 85% or 86%. 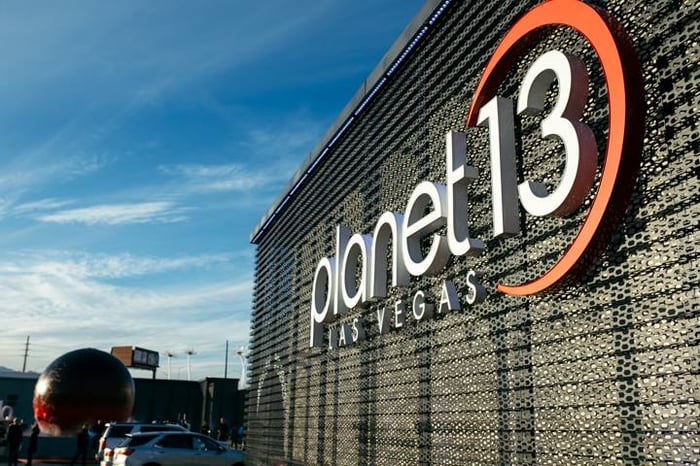 Marijuana stocks are also far more likely to show investors than green over the next five years than Shiba Inu. Specifically, U.S. multistate operator (MSO) Planet 13 Holdings (PLNH.F -5.87%) has all the tools necessary to run circles around SHIB.

To state the obvious, the U.S. is the place to be in when it comes to cannabis growth. Marijuana-focused analytics firm BDSA projects a compound annual growth rate of 14% through 2026, leading to more than $47 billion in U.S. annual weed sales. That's roughly three-quarters of estimated global legal weed sales five years from now.

What makes Planet 13 such an amazing stock to buy is its focus on the cannabis experience. Whereas most MSOs are opening dispensaries in as many states as possible, Planet 13 has only two operating retail locations. However, these locations are unique. The Las Vegas SuperStore spans 112,000 square feet (that's bigger than the average Walmart) and sports a consumer-facing processing center, an events center, and a café. Meanwhile, the Orange County, Calif., SuperStore will span 55,000 square feet when complete.

There isn't a pot stock on the planet that can offer cannabis enthusiasts the experience or selection of Planet 13. With a handful of other tourist-heavy markets picked out in the U.S., Planet 13 is well on its way to recurring profitability. 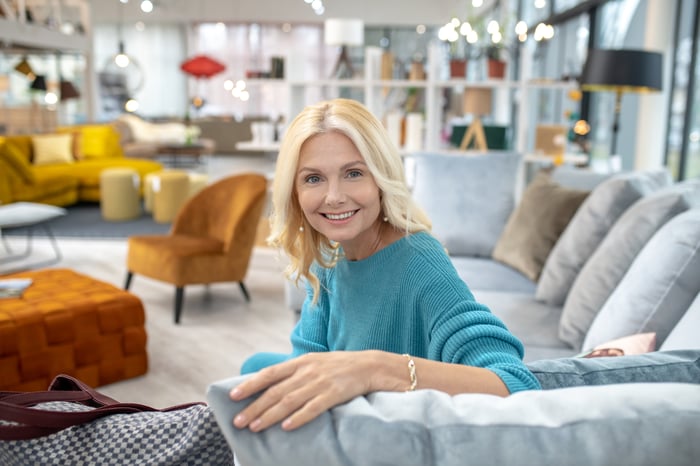 Fourth and finally, furniture company Lovesac (LOVE -4.35%) is a supercharged small-cap stock that can run circles around Shiba Inu by 2026. And yes, you're reading that correctly: I believe a furniture stock will outperform a hyped digital currency.

The first thing to understand about Lovesac is that it's not like a traditional furniture company. Its outperformance will be based on a combination of innovation, eco-friendliness, and its omnichannel presence.

While Lovesac was once known for its beanbag chairs (known as sacs), the company now generates close to 85% of its revenue from sactionals. These are modular couches that can be rearranged dozens of ways to fit any living space. Sactionals have about 200 different cover choices, all of which are easily washable and give buyers the ability to match any color scheme or furniture theme within a home. Perhaps best of all, the yarn used in these covers is made entirely from recycled plastic water bottles. This combination of functionality, choice, and environmentally friendly design has really resonated with the company's core customer, millennials.

Lovesac also stands out for its success in shifting its sales online during the pandemic. Whereas traditional furniture companies rely on foot traffic into brick-and-mortar stores, Lovesac has leaned on in-store partnerships, pop-up showrooms, and online sales to reduce its overhead expenses.

This furniture stock could easily put SHIB in the doghouse over the next five years.

3 Nasdaq 100 Stocks to Buy Hand Over Fist in March