Enterprise Products Partners (NYSE:EPD) is one of the largest midstream pipeline  companies in North America. The energy assets it owns and operates are vital cogs in the industry and would be difficult to replicate or replace. There are many reasons to like Enterprise today -- for one thing, its distribution yield is toward the high end of its historical range. But there's still a pretty notable reason that investors might worry that the future won't be as bright as the past.

Master limited partnerships like Enterprise are specifically designed to pass income on to shareholders, which helps explain at least part of the generous 7.3% yield. But that number is just one of the reasons to like Enterprise. The yield is backed by more than two decades of annual increases, including a hike during last year's pandemic slowdown. Meanwhile, the distribution was covered by distributable cash flow by roughly 1.6 times in the second quarter. Stepping back, it looks like Enterprise's quarterly distribution is very safe, despite the high yield. 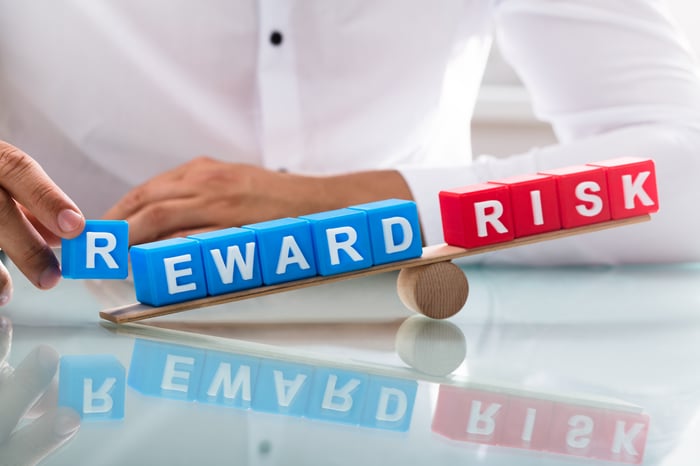 One of the reasons for Enterprise's distribution strength is that, as a midstream company, it has a very conservative approach. For the most part, customers pay the partnership for the use of its assets. The payments can be volatile given the nature of the energy sector; that isn't necessarily such a big deal. For example, in 2020, when oil and natural gas prices plunged because of declining demand during the coronavirus pandemic, Enterprise's distributable cash flow only dropped 3%.

It's also notable that Enterprise's asset mix is extremely diverse. It owns pipelines, storage, transportation assets, and refineries, among other things. With a market cap of about $50 billion, it is one of the biggest names in the domestic market, while holding assets that serve the global energy market.

That's important, because the push to reduce carbon emissions may have some investors worried about the future. But global population growth and economic progress in developing nations suggest that all sources of energy, including oil and natural gas, will remain important for years to come. In fact, Enterprise even expects absolute demand for oil to be higher in 2040 than it is today, despite the likelihood that these fuels will be a smaller piece of the total energy pie.

The next big reason to like Enterprise is that it has a long history of being fiscally conservative. The partnership's balance sheet is one of the strongest among its similarly sized midstream peers, with a debt to earnings before interest, taxes, depreciation, and amortization (EBITDA) ratio of about 4-to-1. So Enterprise has a well covered distribution backed by a highly predictable and resilient business model, all layered on top of a strong financial foundation. That's a lot to like.

Before you jump in and buy Enterprise, however, you need to understand that any company related to oil and natural gas, and the products they get turned into, is facing headwinds from the rise of clean energy. While demand for these fuels may remain strong for years to come, the social and political tide is running against companies like Enterprise. The recent cancelation of the Keystone XL pipeline by peer TC Energy is a prime example of the potential risks. To summarize a complicated and fraught situation, after years of trying to get key pieces of Keystone approved, TC Energy gave up on the effort after the latest hurdles put up by the U.S. government.

The big deal here is that much of the growth in the midstream sector has been driven by new construction. If new construction becomes more difficult, then Enterprise's future looks a good deal less appealing. Its financial strength and scale should allow it to play the role of industry consolidator, but if hostility toward pipelines increases even that path to growth could be blunted. Notably, distribution increases in recent years have slumped into the low-single-digit range. Right now, the high yield is what most investors are buying.

You probably won't like Enterprise if you are a glass-half-empty type, given that the future is increasingly cloudy. However, if you see the glass as half full, Enterprise is a premium name in an industry that faces mounting social stigma even though it remains vital to the world. Yes, the high yield is the main attraction, but if Enterprise can figure out how to deftly navigate the evolving midstream landscape, something it has managed to do quite well so far, then today could still be a good time to step aboard.