Sirius XM Holdings (NASDAQ:SIRI) released its earnings report for the third quarter of 2021 on Oct. 28. Despite higher earnings and signs that its growth could continue, the stock price for the satellite radio provider experienced little movement on the following trading day.

Although it continues to offer more solid financial results than rival Spotify (NYSE:SPOT), the stock for Sirius XM doesn't seem to have connected with the public as well as its rival in past years. However, Sirius XM has focused increasingly on service outside of the car, ad sales, and exclusive content offerings. The question for investors is, does that serve as the catalyst Sirius XM needs to finally deliver for investors? 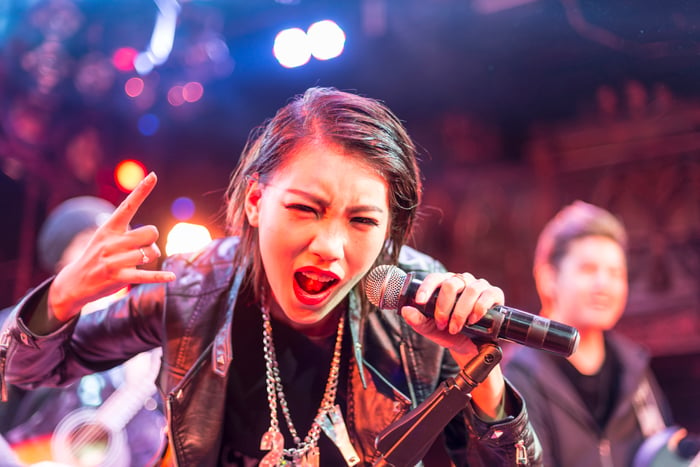 In the third quarter of 2021, Sirius XM reported revenue of $2.2 billion, 9% higher than the same quarter in 2020. Most of that growth came from advertising sales revenue, which grew 31% during the period to $451 million. And with that gain, the company earned a net income of $343 million, 26% higher than the year-ago quarter. Sirius XM achieved this growth mostly by limiting the increase in operating expenses to just over 1%.

Furthermore, the free cash flow of $588 million for Q3 is a 62% increase from the same quarter in 2020. This helped make it possible for Sirius XM to hike its annual dividend by just over 50% to just under $0.09 per share. While this brings the cash yield to just over 1.4%, its payout now exceeds the 1.3% average dividend return of the S&P 500. Investors should also note that this payout has risen every year since its reintroduction in 2016.

Despite that higher dividend, conditions may not change quickly for Sirius XM. Its forecast for full-year 2021 revenue of $8.65 billion would amount to a year-over-year increase of 7%. This implies a slightly slower but steady growth rate compared with Q3.

Still, Sirius XM also remains significantly cheaper than its rival. It trades at a price-to-sales ratio of about three, compared to around five for Spotify.

Interestingly, Sirius XM's stock outperformed Spotify's over the last year, albeit barely. Sirius XM gained about 6% over the previous 12 months compared to just 3% for Spotify. Unfortunately, Sirius XM stock has generally failed to strike a chord with investors, losing 3% of its value over the last five years, compared to the nearly 120% gain in Spotify over the same period. 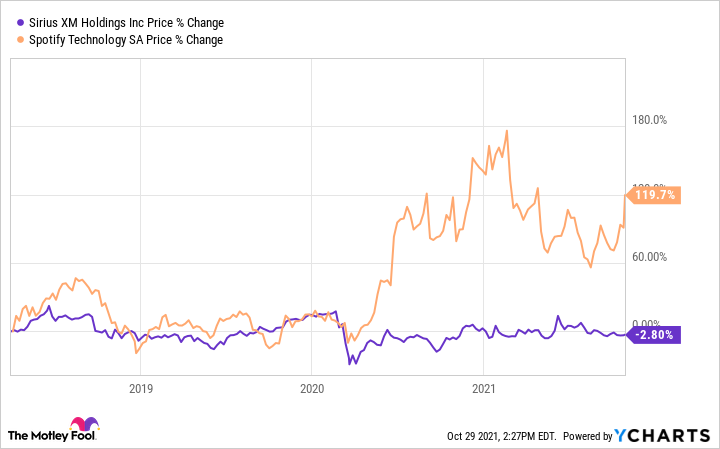 Nonetheless, Sirius XM has steadily built a solid business. In one sense, it holds a monopoly as it can offer radio stations that cover the nation, Pandora streaming, and The Howard Stern Show all on a car radio.

Moreover, as more consumers buy new cars, it steadily increases the number of people exposed to Sirius XM thanks to deals the company has made with numerous automakers. Sirius XM has also sought to improve engagement outside of the vehicle and add more exclusive content, two niches that could further lift the stock.

Admittedly, overall subscriber growth fell as "paid promotional" subscriptions, or short-term service offered to those who purchase a new car as a promotion, fell 42% year over year due to lower car sales amid supply shortages.

Nonetheless, on the Q3 2021 earnings call, CEO Jennifer Witz announced that Sirius XM attracted a record 616,000 net additions of self-pay subscribers during the quarter. That accounts for 56% of the 1.1 million net additional self-pay subscribers signed up for Sirius XM service over the last nine months. Paid subscriptions to Pandora also grew by about 2%, but even with falling overall numbers, this increase in higher-value customers bodes well for the company.

Still, Sirius XM faces ongoing challenges. Consumers can just as easily choose content from Spotify or iHeartMedia's iHeartRadio, reducing the significance of its dominance in the satellite space. Although Spotify has dramatically underperformed Sirius XM with regard to profits, Spotify's strategy of fostering podcasts and signing up stars such as Joe Rogan has undoubtedly boosted its revenue at a faster pace than Sirius XM.

Additionally, consumers can only get Sirius XM content in the U.S. or Canada, a limited area compared to Spotify's worldwide availability. So far, the company has shown no indications it plans to expand beyond North America.

Should I consider Sirius XM?

Sirius XM's relationship with broadcasters such as Howard Stern and its nationwide radio stations give it some potential to build on its growth. Moreover, the growing revenue, profits, and strong free cash flow provide the company with optionality.

Indeed, Spotify's offering is not only available to more people but continues to dramatically outpace the revenue growth of Sirius XM. Nonetheless, the recent increases in paying customers and the massive surge in ad revenue should offer comfort to investors. While this has not yet boosted shares, the lower valuation and the potential for surging revenue amid the competition could eventually bring growth to this communications stock.