Cathie Wood has become a star of Wall Street by identifying the innovative companies behind new growth trends. Her flagship fund, ARK Innovation ETF, has returned more than 39% annually over the past five years.

Sometimes, money talks, and we can see what Cathie Wood sees as the big winners of the future by analyzing the stocks she has invested heavily in through her various exchange-traded funds (ETFs). These three top holdings trade at attractive valuations, making them compelling investment ideas.

Digital healthcare was essential during the height of the pandemic, but it's not likely to go away now. Teladoc Health (TDOC 8.00%) is a leading telehealth platform with a user base of 52.5 million paid memberships in the United States. The company recently reported its 2021 third-quarter earnings, featuring revenue growth of 81% year over year, and is guiding for full-year revenue at approximately $2 billion. This would be an 85% increase over the 2020 pandemic year. 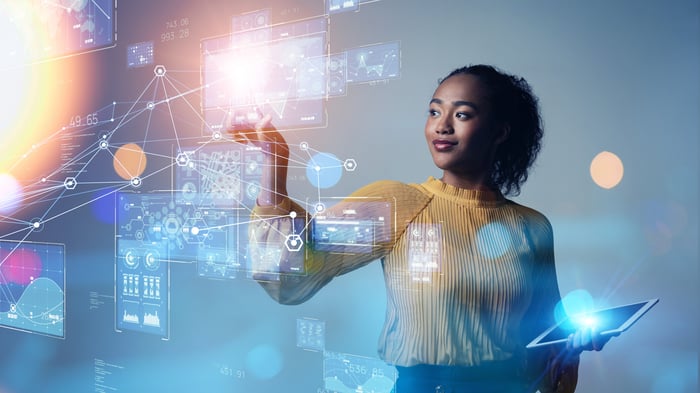 Despite Teladoc's strong growth, investors have been skeptical of it, potentially labeling telehealth services as a commodity, easy for competition to copy. The stock's price-to-sales (P/S) ratio is 12, far lower than many tech companies with slower growth and much smaller revenue figures.

The company is in the early stages of growing Primary360, its "one-stop-shop" virtual healthcare solution resulting from multiple acquisitions and years of planning. It was formally launched in early October, and its adoption by members over the coming quarters will be a priority for investors to focus on.

Cryptocurrency has become increasingly mainstream over the past several years. It's a whole new frontier for investors, and the exchange platform Coinbase Global (COIN 23.99%) is among the most prominent companies involved in crypto. More than 68 million users buy and sell different cryptocurrencies on Coinbase.

The popularity of crypto, including well-known coins like Bitcoin and Ethereum, has been great for Coinbase's business, which charges fees when someone trades coins on its platform. Its revenue grew more than 11-fold to just over $2 billion in the company's 2021 second quarter. The revenue growth was driven by a 16-fold increase in year-over-year trading volume.

This surge in activity on Coinbase is a signal of just how quickly crypto has become a mainstream investment class, like stocks and precious metals. Coinbase is also continually adding new services like its Coinbase debit card, which will enable members to spend based on their crypto assets.

Analysts are looking for full-2021 earnings per share (EPS) of $13, valuing Coinbase stock at a price-to-earnings ratio of 27. This seems reasonable given how rapidly Coinbase grew this year, but its business could be volatile because it's tied to trading activity, which can fluctuate.

People have been cutting the cord for years, but streaming remains a strong growth trend that still has room to run. Roku (ROKU 9.03%) makes streaming sticks that help consumers convert their televisions into streaming-ready smart TVs. And a variety of manufacturers like Hisense and TCL use Roku's operating software to offer streaming capabilities built right into the TV sets.

Roku has built up a large user base over the years, totaling 55.1 million as of the second quarter. Users also grew 28% year over year in the same period, showing that new users continue to join the platform at a robust pace.

The upside for Roku is the ad revenue that is starting to flow through streaming instead of traditional broadcast and cable channels. In 2020, a research report estimated that nearly half of all streaming TV ads go to Roku devices, making it the leading streaming platform on the market for ad tech. Advertising dollars are likely to continue flowing through streaming channels. And ad spending could reach almost $25 billion on streaming by 2024 from $13 billion in 2021.

Roku is generating free cash flow, and analysts expect EPS of $1.33, making this the company's most profitable year yet. The stock trades at a P/S ratio of 15, despite analysts calling for 60% revenue growth in 2021. If revenue continues growing, earnings growth could increase, making the stock an attractive combination of revenue growth and profitability.

3 People That Still Believe in Teladoc
410%