The latest catalyst was Lucid's initial batch of customer deliveries for its custom "Dream Edition" Lucid Air EVs in late October. Lucid started producing the vehicles at its factory in Casa Grande, Arizona in September.

Lucid's first shipments should silence some of the bears, but is it still too early to buy the stock and assume it can replicate Tesla's (NASDAQ:TSLA) huge gains? 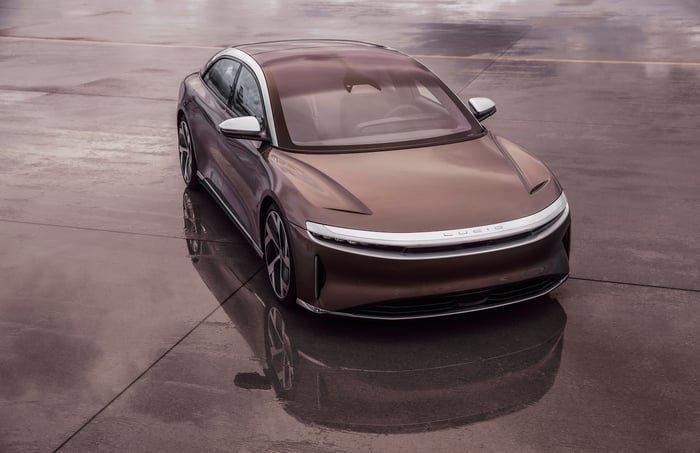 When the SPAC Churchill Capital IV Corp. announced its planned merger with Lucid in February, its stock skyrocketed from about $10 to an all-time high of almost $65 during the Reddit-fueled rally later that month.

Bullish long-term estimates for the EV market lifted many other EV-related SPACs, and Lucid stood out from the crowd because it was founded and led by Peter Rawlinson, Tesla's former chief of engineering.

However, investors quickly realized Lucid's rally was unsustainable since it hadn't shipped a single vehicle yet, and the stock tumbled back to the high teens by May. But over the past few months, Lucid's stock climbed back to the mid $30s as its market cap reached nearly $60 billion.

Why did the market warm up to Lucid?

There's no way to justify Lucid's current valuation with traditional metrics right now, since the company just started to ship its first vehicles. However, the bulls seem to be impressed by its long-term ambitions.

In its IPO prospectus, Lucid set a target of generating "at least" $1.07 billion in revenue by the "fifth anniversary of the Churchill IPO." But in an investor presentation, it claimed it could generate $2.2 billion in revenue by 2022 by producing about 20,000 Lucid Air sedans. In late September, Lucid said it had already surpassed 13,000 in initial reservations. It currently has a maximum annual production capacity of 53,000 vehicles.

Even if Lucid hits its production target next year, it would still be a much smaller company than Tesla, which delivered nearly 499,550 vehicles in 2020 and 627,350 vehicles in the first three quarters of 2021.

The entry-level version will cost $77,400 before deducting a federal tax credit of up to $7,500 for plug-in vehicles. The Lucid Air can notably travel up to 520 miles on a single charge, which beats Tesla's longest-range vehicle (the Model S Long Range) by more than 100 miles.

Lucid will report its third-quarter earnings on Nov. 15. Investors won't be expecting the company to generate any meaningful revenue yet, but they'll be waiting for updated reservation numbers. If Lucid adds a few thousand reservations and proves it can easily hit its target of 20,000 shipments next year, its stock could maintain its current momentum.

But it's still too early to call Lucid the next Tesla

Lucid arguably has a much better business model than many of the market's other SPAC-backed EV makers. It has an experienced leader, an operating factory, and a growing customer base.

However, Lucid will inevitably face tougher competition in the high-end EV market. Companies like BMW, Daimler's Mercedes-Benz, and Volkswagen's Audi are already manufacturing more luxury EVs, and it's only a matter of time before Tesla rolls out pricier EVs to address that higher-end market.

Tesla benefited from an early-mover's advantage in the EV space, but Lucid is arriving much later to the party. It might carve out a defensible niche with its luxury longer-range EVs, but it's still too early to dub it the "next Tesla" before seeing how it actually fares against the competition.

It's very expensive and very speculative

Lucid's current market cap of nearly $60 billion values the EV maker at 27 times its sales target for next year. That makes it more valuable than Honda (NYSE:HMC), which sold about 4.5 million vehicles last year.

Tesla, which has a market cap of $1.21 trillion, trades at 18 times next year's sales. The bulls might claim Lucid deserves to trade at a premium to Tesla, since it has more room to grow, but Lucid hasn't actually proven it can scale up its operations and stay competitive yet.

Lucid will likely remain a hot topic among investors, but I'd rather wait for a clearer picture to emerge before buying this speculative and volatile stock.