The company announced it has received approval for another Keytruda indication in the E.U.

With pharma stock AbbVie (ABBV 0.72%) set to lose U.S. exclusivity for its immunology drug Humira in 2023, analysts believe that Merck's (MRK -0.62%) cancer drug Keytruda will soon claim Humira's crown as the top-selling medicine in the world.

Keytruda recently advanced down that road with a major regulatory approval. In late October, the European Commission (EC) approved it in combination with chemotherapy to treat patients with locally recurrent, unresectable or metastatic triple-negative breast cancer (TNBC) in the European Union (E.U.).

Merck's best-selling drug is already approved in Europe, the U.S., and elsewhere for a wide variety of indications, including melanoma, lung cancer, head and neck cancer, and Hodgkin's lymphoma. All told, Keytruda makes up some 36% of the company's $35.2 billion in total revenue through the first three quarters of this year.

So how big a role will this latest approved indication play in Keytruda's potential rise to be the top-selling drug? To address this question, let's start by looking at what led to the EC's approval. 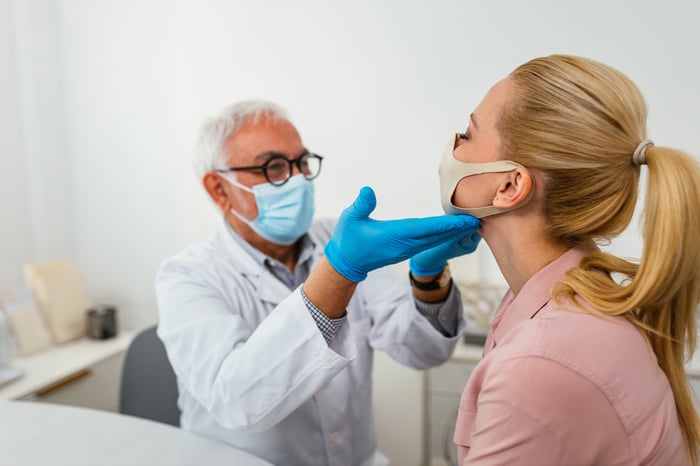 TNBC is an especially aggressive type of breast cancer, which is evidenced by its high recurrence rate in the first five years after diagnosis. A study following TNBC patients treated between 1999 and 2008 found that 26.6% went on to be diagnosed with TNBC again within three to nine years following treatment. The prognosis was good for patients with recurrent TNBC that was confined to the breasts or "locally recurrent."

Unfortunately, the vast majority of recurrent TNBC cases were distant or metastatic recurrences, which means that the cancer had spread or metastasized to organs such as the lungs and brain. These patients had a particularly poor prognosis, which was demonstrated by a mere 12% five-year relative survival rate.

What served as the basis for Keytruda's approval in the E.U. were results from its phase 3 clinical trial. TNBC patients receiving 200 milligrams of Keytruda every three weeks and chemotherapy treatment had a median overall survival rate of 23 months compared to 16.1 months in the chemotherapy-alone group.

With a better understanding of Keytruda's encouraging efficacy in helping TNBC patients live longer, let's gauge the sales potential of this newly approved indication in the E.U.

About 355,000 patients were estimated to have been diagnosed with breast cancer in the E.U. last year. Given that 10% to 15% of breast cancer cases are TNBC, this would equal 36,000 to 53,000 TNBC patients. The number is likely even higher since patients treated years ago are still at risk of recurrent TNBC. For the sake of conservatism, let's assume Keytruda's market is 50,000 patients. Given the drug's efficacy in treating TNBC patients, I will also assume that it can capture 20% of the total market or 10,000 patients.

What would those patients and their insurance companies pay? Given the E.U.'s stricter drug-pricing policies, it would likely be far less than Keytruda's $174,000 annual list price in the U.S. After various adjustments, I am going to assume the price will come to $50,000 per year -- or about $500 million in additional annual revenue for Merck. That is just over 1% of the $48.2 billion in total revenue analysts expect for Merck this year. The effect will be several times greater as a portion of Keytruda's overall sales -- closer to a 3% boost to the $17 billion to $18 billion the drug could record in revenue this year.

However, Merck has other solid growth catalysts. Its vaccines businesses -- headed up by its human papilloma virus (HPV) vaccine known as Gardasil -- accounted for 20% of total revenue year-to-date and is also 22% higher than the year-ago period. In addition, Merck's animal health businesses contributed to 12% of the company's total revenue year-to-date and posted a 22% year-over-year growth rate. Combined, Merck's vaccines and animal health businesses move the needle about as much as Keytruda and grew more rapidly than Keytruda's 21.4% year-over-year growth rate.

So while Keytruda's approval by the EC may not be an immediate, major boost to Merck's earnings, it could be at least a helpful component in the company's growth ahead -- and there are other promising programs underway too. Analysts forecast that Merck will be able to grow its adjusted earnings per share (EPS) by 13% annually over the next five years. Given that healthy pace, I believe that the stock -- currently about $88 per share -- is not unjustifiably high. In fact, it trades at about 15 times estimated earnings for this year. And while investors wait for Merck's growth to play out, the stock offers a safe dividend that yields 3% and is likely to be raised in a few weeks.

Want to Collect a Dividend Every Month Next Year? Buy These 3 High-Yielding Stocks
420%