Chegg (NYSE:CHGG) reported its third-quarter earnings after the market closed on Monday, and management highlighted several troubling signs for the company. Since then, the stock price has crashed, and was down by more than 45% as of mid-afternoon Tuesday.

But there was one number in that report that the market may be overlooking, and it could be a reason to stick with the online learning platform's stock. 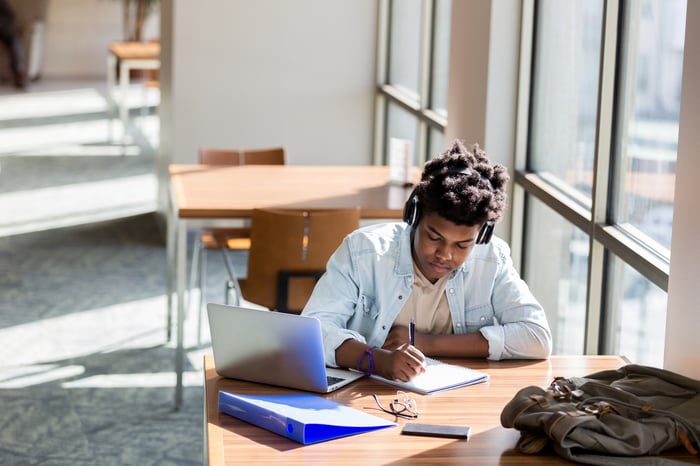 Chegg has a powerful flywheel

The number I am talking about is 70 million -- as in Chegg's database of 70 million pieces of step-by-step solutions. This figure increased by 4 million over the previous quarter, and that's the content that attracts students to the platform in the first place.

Consider a college student working on a homework assignment or studying for an exam. Now imagine that this student -- as often happens -- gets stuck on a particular problem or a concept.

At that point, they have a few choices. They could pause their work and wait until the next lecture (which could be days away) to ask the professor about it. They could email the professor and wait for a response, which could take hours or longer. (As a college professor myself, I've been told by students that I have one of the fastest email response times among faculty, and I take hours to respond.)

Or they could turn to Chegg, and with a few clicks and in under five minutes, they can have examples to help them better understand what they are grappling with.

If the company does not have any help on the topic a subscriber is searching for, they can pose their question on Chegg's platform, and it will be answered by one of the company's subject-matter experts. After that, the newly created question and the answer will be available for all of Chegg's subscribers, current and future, to view.

That's a powerful flywheel that attracts new customers at a low cost through search engine results.

The Chegg sell-off may be overdone

Unfortunately, along with its growth on the ever-important content metric, Chegg reported several awful figures. It lowered its fiscal year forecasts for revenue and adjusted earnings before interest, taxes, depreciation, and amortization (EBITDA) by $47 million and $41.5 million, respectively. Those are substantial cuts considering there is only one quarter left in the year.

It's no surprise that the stock was down almost 50% the day after the earnings report was released. Still, the sell-off may have been overdone. The stock is now trading at a price-to-free-cash-flow ratio of 30.54. That's the cheapest valuation the company has had by that metric since its initial public offering (IPO) in 2013.

Besides, the reason management gave for expecting significant declines (decreasing student enrollment) is likely a temporary issue. It may last beyond this quarter and well into next year, but as people's fear of contracting COVID-19 recedes, enrollment could rebound. The fall semester was the first semester that some colleges attempted to bring back students to campus after more than a year of remote learning. Understandably, some may hesitate to return to dorms and classrooms while the deadly virus is still in wide circulation.

Long-term investors can put Chegg on their watch lists and consider adding it to their portfolios. The company's massive and growing database of content will remain relevant to students for a long time -- even if the market might be overlooking that right now.