It appears airlines are about to enter a new chapter in their post-pandemic recovery, and that should be bullish for airplane demand. Shares of Boeing (NYSE:BA) traded up 5%, and key suppliers, including Spirit AeroSystems Holdings (NYSE:SPR) and Triumph Group (NYSE:TGI), were up as much as 10% on a day full of optimism about the direction of the global recovery.

Airlines were hit hard by the pandemic, and their issues rippled through to aircraft manufacturers and their suppliers. With revenue collapsing and debt piling up, carriers were in no position last year to buy new aircraft, creating issues for Boeing, Airbus (OTC:EADSY), and their supply chains. 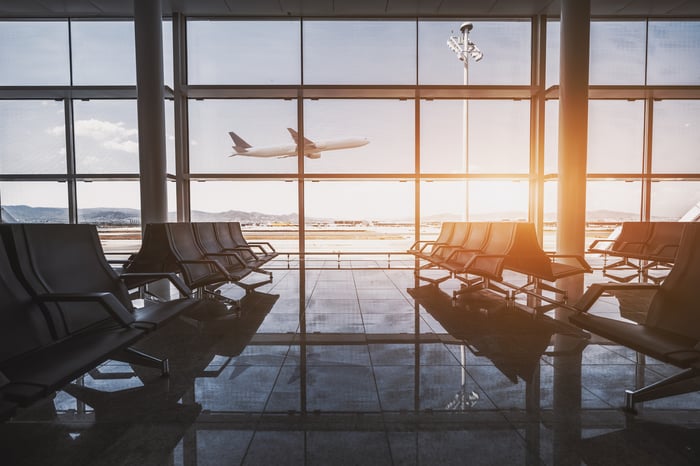 We've seen an uptick in travel demand in 2021, but airlines have mostly used their existing fleet, including planes that were grounded in 2020, to handle the surge. Airplane orders that have gotten done in 2021 have mostly been at terms very favorable to the buyers, leading to lingering questions about how quickly the sector will recover.

But the commercial aerospace companies got two pieces of good news on Friday that helped to propel their shares higher. One-time Food and Drug Administration head Scott Gottlieb told CNBC that the pandemic "may well be over" by January, thanks to vaccine mandates and a new antiviral from Pfizer that appeared to significantly cut the risk of fatalities and hospitalizations from COVID-19.

The airlines are also showing signs that the pace of the recovery is quickening. On Friday, Delta Air Lines said it saw international bookings jump by 450% in the first six weeks since the United States announced plans to reopen its international borders to travelers from certain countries. Delta and many of its peers make most of their profits on international flights, and a more robust, global recovery would help improve balance sheets and get the industry back to its normal airplane-purchase habits sooner than some have feared.

The environment is improving, but investors should still be cautious before investing in commercial aerospace right now. Boeing is likely off of its lows but is still weighed down by several issues, including the 737 MAX grounding and ongoing troubles with its 787 Dreamliner. After its stumbles, Boeing is a "show-me" story, and investors should be cautious until the company can demonstrate its operations have improved.

Spirit and Triumph are very much tied to those issues, as well. Just last week, Spirit reported a third-quarter operating loss of $1.13 per share, worse than the $0.77 per-share loss that was expected, as it continues to try to diversify itself away from Boeing work. Triumph is in the middle of a multiyear turnaround as it tries to shed legacy assets and focus on programs that can boost profitability.

The long-term outlook for travel is strong, but given the uncertainty of the timing and the questions surrounding these companies, I believe a company like AerCap Holdings (NYSE:AER), which just became the largest player in aviation finance, is a better way to invest in the recovery than either individual airlines or their suppliers.