AstraZeneca's (AZN -0.71%) second best-selling cancer drug, Imfinzi, is currently approved to treat lung cancer (and outside of the U.S., advanced bladder cancer). In the near future, the drug could receive a boost in its sales from another indication.

AstraZeneca recently announced that in its phase 3 trial interim analysis, treatment of advanced biliary tract cancer with Imfinzi and chemotherapy was more effective than chemotherapy alone when used as a first-line treatment.

What could this mean for Imfinzi's sales trajectory, and what impact would it have on the pharma stock's overall sales? Let's dig into Imfinzi's profile and the advanced biliary tract market to address these questions. 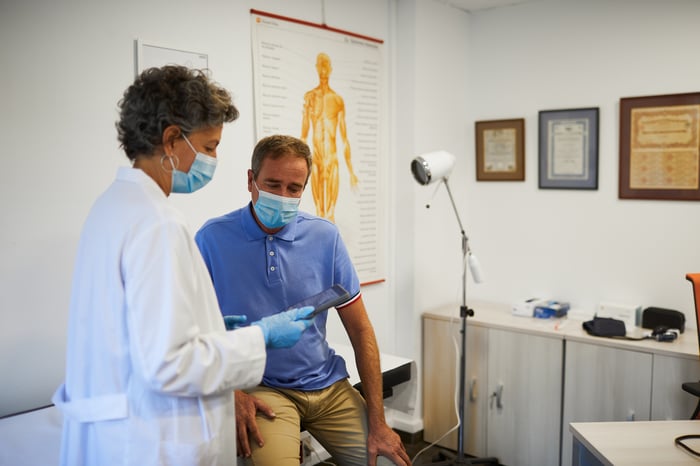 A potential breakthrough treatment for a devastating disease

Early stage biliary tract cancer typically presents with no symptoms, according to AstraZeneca. Most new cases are diagnosed at an advanced stage when the cancer has already spread to other parts of the body. This is why only 5% to 15% of all patients with biliary tract cancer survive at least five years after their diagnosis.

According to Dr. Do-Youn Oh, the principal investigator of the phase 3 trial, "progress in the 1st-line treatment setting has remained largely stagnant for more than 10 years." Fortunately, Imfinzi could bring hope to biliary tract cancer patients.

The detailed results of Imfinzi's efficacy and safety will be presented at a medical meeting and shared with health authorities in the near future. But in the meantime, AstraZeneca noted that the pairing of Imfinzi and chemotherapy had statistically superior results when compared to the current standard-of-care options. The Independent Data Monitoring Committee (IDMC) found that Imfinzi and chemotherapy together improve overall survival (OS) and progression-free survival (PFS) compared to chemotherapy as the only treatment.

OS is defined by the National Cancer Institute as how long a cancer patient lives from the start of treatment. PFS is how long a patient lives with the disease during and after treatment without the cancer progressing or getting worse.

Based on interim results, Imfinzi could be a relief to oncologists and biliary tract cancer patients. But what sales could this potential indication generate for Imfinzi and AstraZeneca if the drug is approved?

Imfinzi's annual list price is $180,000 in the U.S. However, most cases are outside of the U.S. in countries with cheaper drug prices. On this basis, I estimate the average annual net price per patient to be around $20,000 based on the fact that major countries such as France and Germany pay upwards of 50% less than the U.S. for prescriptions, according to data from DrugWatch. While no data is provided for developing nations such as China and India, I believe it's reasonable to expect drug prices to be even less than in developed nations. Fully capitalizing on its market opportunity could equate to as much as $600 million in annual sales for Imfinzi biliary tract cancer indications around the world.

This is just under 2% of the $36.1 billion in total revenue that analysts are forecasting for AstraZeneca this year. But $600 million would still be a significant tailwind for Imfinzi. In light of Imfinzi's current trajectory for about $2.5 billion in sales this year, $600 million in additional sales would be an approximately 25% lift over this year's base.

Growth at an attractive valuation

AstraZeneca has ramped up its research and development (R&D) expenses over the past year to fund various clinical trials for Imfinzi and other cancer drugs, cardiovascular drugs, and respiratory and immunology drugs. The company's R&D expenses grew 27.5% year over year to $3.54 billion in the first half of this year.

AstraZeneca's commitment to discovering and bringing new drugs to the market for serious medical conditions is expected to result in strong future revenue and earnings per share (EPS) growth. In fact, analysts predict that AstraZeneca's EPS will grow in excess of 20% annually over the next five years.