Shares of Mexican-based cement maker Cemex (NYSE:CX), which has material operations in the United States (about 30% of sales), rose as much as 11% today. As of 1:51 p.m. EST, the stock was up 8.8%. However, it wasn't the only name related to construction and infrastructure to jump today. Giant U.S. steel mill Nucor was higher by 6% at one point, with peers Cleveland-Cliffs and Steel Dynamics up as much as 8% and 5%, respectively. Vulcan Materials, which like Cemex operates in the aggregate space, was higher by around 5% or so. Even Caterpillar, which makes construction machinery, was higher by nearly 4% at one point. The moves weren't gigantic, except perhaps for Cemex's, but they all played on the same theme from Washington.

Over the weekend, the House of Representatives passed a roughly $1 trillion infrastructure bill. The next step is for the bill to be signed by the president and put into law. Although the passage happened over the weekend, it's been a long time coming, noting that the bill passed the Senate in August. But now that the waiting is almost over, investors have reacted by boosting stocks that would likely benefit from the spending in the bill. 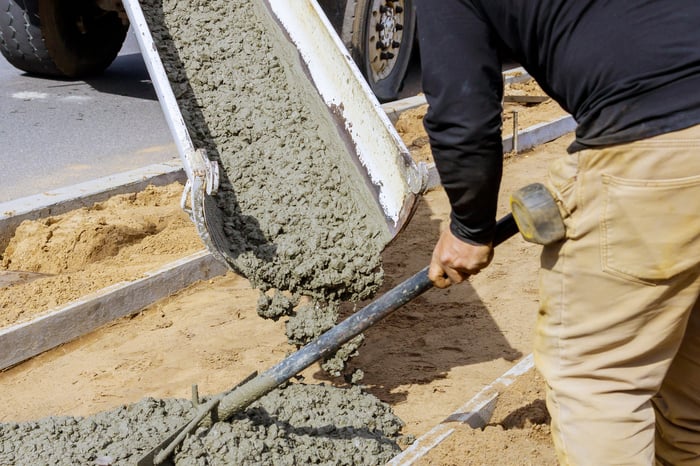 That includes around $550 billion of spending above current projections on things like bridges, roads, and railways, among other things, like improving broadband access, according to The Wall Street Journal. Upgrading these things will require material amounts of cement, steel, and other industrial materials, like aggregates (gravel and such). It could also lead to increased spending on the heavy equipment used in the process of building, like bulldozers and cranes. And while there remain political disagreements about all of the spending in the bill, it is hard to deny that the spending won't have a beneficial impact on infrastructure companies like Cemex, Vulcan, Nucor, Steel Dynamics, United States Steel, and Caterpillar, among many others, as spending ramps up.

The House approval of the infrastructure bill is definitely good news for infrastructure-related names, though it really won't be finalized until it has the president's signature on it. That said, this is just one piece of news with broad application that investors have gotten, perhaps, a bit too excited about in the near term. Indeed, the long-term benefit may not be quite as visible or strong as hoped and could also be offset by other negative events, such as an economic downturn that slows spending more broadly. There are no crystal balls on Wall Street, and things may not pan out quite as well as hoped today. In addition, the benefits accruing to any one company could be relatively modest compared with the rest of their business, which helps explain why many of the stocks here had pulled back from their highs by early afternoon. Basically, a grain of salt is definitely in order even though the bill's passage is a broad positive in the infrastructure space.