Shares of Elastic (NYSE:ESTC) rose 16.5% in October, according to data from S&P Global Market Intelligence. The company behind Elasticsearch, a full-text search and analytics engine, announced a couple of needle-moving deals last month. Those events formed the linchpin around which most of October's shareholder returns were realized.

First, Elastic held its annual ElasticON conference, highlighting how customers use Elasticsearch to solve their data analytics challenges. The virtual event featured speakers from household names such as Microsoft, Twitter, General Motors, and NASA, a who's who of high-profile Elastic customers. Attendees left the conference with a deeper appreciation for Elastic's cloud-based search systems, artificial intelligence tools, and growing collection of data security services.

Next, the company expanded its integration with Alphabet's (NASDAQ:GOOG) (NASDAQ:GOOGL) Google Cloud platform. With the new Elasticsearch features, the Google Cloud Console now offers more data-collection options and a simpler workflow for installing and managing their data-grabbing agents. This partnership announcement inspired the largest single-day jump of the month as Elastic shares rose 3.8% the next day.

The gains continued as Elastic acquired the data profiling start-up Optimyze. The deal was announced on Oct. 14 and closed on Nov. 2. Financial terms were not disclosed, but the acquisition will boost Elastic's data analysis tools with Optimyze's always-on performance profiling of computer systems handling continuous data streams. Optimyze claims to deliver insight on which line of code is consuming what CPU resources across installed fleets of many thousands of computers. In the long run, this addition of top-notch talent by acquisition should give Elastic a performance-based edge against other data search solutions. 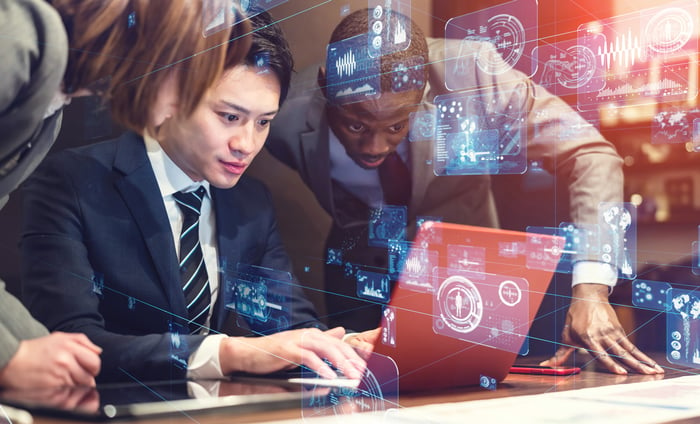 Management sees an annual market opportunity of $78 billion in the enterprise data analytics sector. The trailing revenue of $673 million accounts for a tiny 0.9% slice of that enormous pie, leaving the door open for continued high-octane growth.