Penn National Gaming's (NASDAQ:PENN) share price struck out badly following the Nov. 4 release of its third-quarter (Q3) 2021 results. After missing Wall Street consensus earnings estimates, the company's shares crashed 21% by market close. Though they rose slightly after hours, the drop raises questions about Penn's situation. Does this reveal significant problems, or did a mix of investor skittishness and a perfect storm of circumstances cause the slump? Here's a look at why a cautiously bullish outlook might be justified. 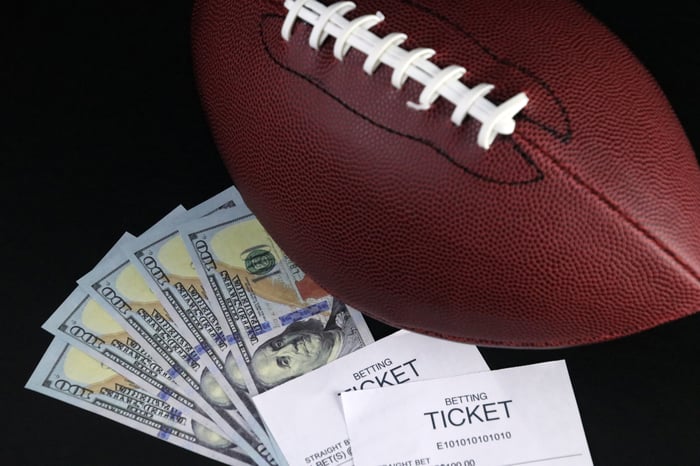 In the "Third Quarter 2021 Earnings Presentation" accompanying the press release and earnings call, Penn National stressed the two-year stack rather than comparisons to 2020. While this tends to gloss over the drop in earnings, the approach might have some merit, given the extraordinary conditions of last year. Compared to pre-pandemic 2019, the company appears to have a strong, steady trajectory of growth, with revenue, earnings, and earnings before interest, taxes, depreciation, amortization, and rent (EBITDAR) all rising solidly. EBITDAR margin rose by 688 basis points between October 2019 and October 2021, from 30.4% to 37.2%, though the latter figure is down somewhat from 2020's over 40% margin.

During the Q3 earnings conference call, CEO Jay Snowden says the "momentum" at the start of the third quarter would have led to results comparable to last year, but "Hurricane Ida, which affected us significantly in the South region, and the regional flare ups of the Delta variant" cut back on performance.

Significantly, Penn National's balance sheet appears to be in decent health. The company had $2.7 billion in cash at the end of Q3, compared to $2.7 billion in debt, with a net debt of $45 million. It is also investing in future growth, using $923 billion of that cash, along with about $1 billion in borrowing, to acquire Score Media and Gaming Inc. The acquisition gives it a powerful Canadian foothold, since Score Media's theScore app is the most popular sports betting platform in that country. Snowden noted theScore "is uniquely positioned to capitalize on the legalization of single event sports wagering in Ontario" and that it will be integrated with Barstool Sports (a media company and sports betting app operator Penn owns a 36% stake in) for marketing and other purposes.

While the timing of the article, which published around the same time as Penn's earnings release, likely contributed to the stock's price drop, it's not clear whether the allegations will have a long-term impact on Penn.

Portnoy has since responded to the allegations on Twitter, describing the article as a "hit piece" and saying he had "never done anything weird with a girl, ever, never anything remotely nonconsensual." The ultimate outcome of the accusations, of course, remains to be seen.

Conditions in the sports gambling market

Industry headwinds may also be at play here. After enjoying a bull run during the COVID-19 lockdowns and the government closure of physical casinos for multiple months, the sports betting and online sports betting markets appear to be cooling off. A long runway of growth still lies ahead of sports betting companies overall, but Wall Street appears to be getting more cautious about simply dumping money into sportsbook stocks. High-profile sector leader DraftKings (NASDAQ:DKNG) saw a nearly 5% one-day drop after a pair of analysts said its rise to profitability is likely to take years based on sector events.

Penn National has physical casinos and racetracks, but its Barstool Sportsbook app still gets much of the media attention. If traders and institutions are warier about investing in the sports betting sector, this is an added pressure feeding into other bearish sentiment about Penn. While investor caution about sportsbook stocks likely isn't enough to cause a sell-off of Penn's shares on its own, it may be amplifying the effects of the Q3 results and the Portnoy scandal.

Where Penn National is likely to go

All three factors -- an earnings miss, the Portnoy commotion, and an overall recent decline in sports betting stocks -- appear to have combined into a sort of stock market piledriver to slam Penn National downward to a 52-week low in a matter of hours.

Penn National appears to still have plenty of future upside, and there are significant positives in its Q3 report despite the earnings flub. Its share value may remain depressed for a few days, or a week or two, but it appears likely to rebound fairly soon. Investors interested in consumer discretionary stocks and who aren't averse to a little risk may even want to look on its current slump as an opportunity to buy its shares at a significant discount.