Since the Great Recession in 2007-09, high-growth technology stocks have done phenomenally well for investors. The best example of this comes from the performance of the Invesco QQQ ETF (QQQ -0.85%), which tracks the Nasdaq 100 index that holds the largest technology companies trading on the Nasdaq exchange. The exchange-traded fund is up 835% since 2009, more than doubling the S&P 500's 337% return over that time span. 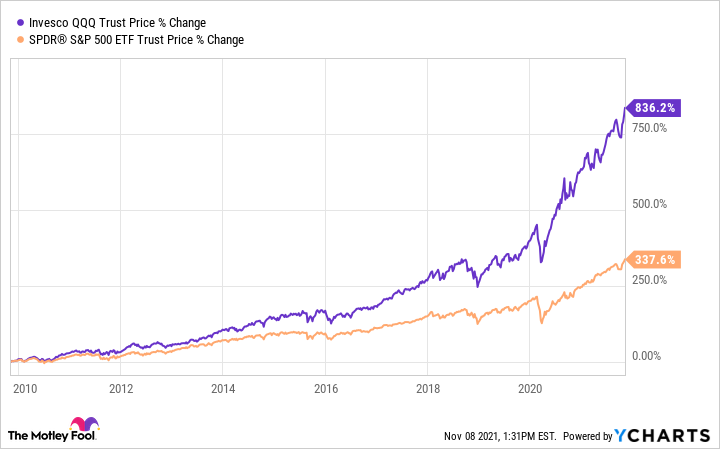 Match Group is an online dating and social connection company that owns popular dating apps like Tinder, Hinge, and Match.com. Outside of Bumble, it is the only large competitor in online dating. The industry is expected to grow at a 7% compound annual growth rate (CAGR) through 2025, which is a nice tailwind for the company to ride.

Even with the pandemic still ongoing around the world (and a headwind to the dating market), Match Group grew revenue 25% in the third quarter to $802 million. Tinder, the company's most popular application, brought in $434 million in the period, growing 20% year over year. On top of this solid Tinder growth, Match Group's other brands are growing even faster at 32% year over year in the third quarter. This is driven by the fast-growing Hinge dating app, which management said grew revenue 100% year over year in Q3. Hinge is still a small part of Match Group's business right now, but if it keeps growing at this rapid rate, it could be as big as Tinder one day. In fact, right now it is the No. 2 top-grossing app on Alphabet's Google Play Store, recently passing competitor Bumble. 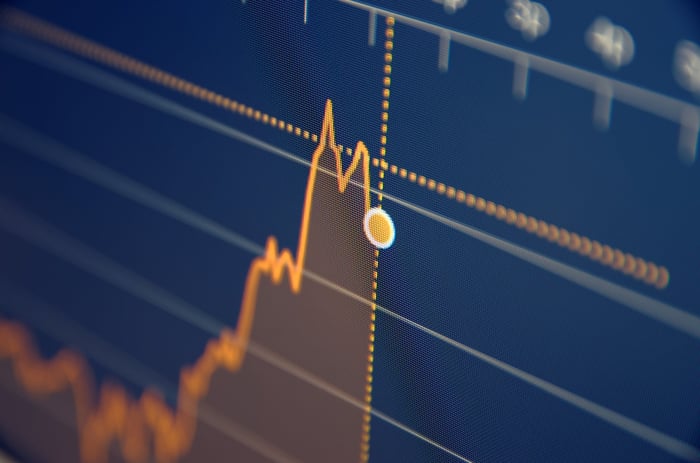 Match Group stock trades at a steep valuation, with a price-to-free-cash-flow (P/FCF) of 55.6. However, if the company can continue growing at a double-digit rate while also expanding its profit margins as it scales, this valuation will come down rather quickly, making the stock a solid pick for investors this month.

Autodesk is one of the largest software companies in the world. The company focuses on serving architects, engineers, manufacturers, and construction workers with its design and building software. Its most well-known products are AutoCAD and Revit, which help architects and other people design projects virtually. On top of these core products, Autodesk is investing in multiple high-growth areas. This includes the Autodesk Construction Cloud, which is a collection of software services for construction workers, Fusion 360, which is a cloud-based design platform for mechanical engineers and manufacturers, and Autodesk Forge, which is a platform that helps third-party developers utilize and build on top of Autodesk's services.

With all these growth opportunities and the increasing digitization of construction and manufacturing, Autodesk is able to forecast its financials with relative clarity. In fiscal year 2023 (calendar year 2022) Autodesk expects free cash flow to hit $2.4 billion. From fiscal year 2023 through 2026, the company is guiding for a double-digit percentage free cash flow CAGR, driven by the profitability of its core products and fast growth of all these new initiatives. And this doesn't include any benefit from the $1 trillion infrastructure bill that just got passed in the United States. The bill targets many industries where Autodesk products are utilized, including water and transportation products. It is tough to predict how much of a tailwind this will bring Autodesk, but it is definitely not bad news for this business.

Like Match Group, Autodesk trades at an expensive valuation, with a P/FCF ratio of around 50. However, if Autodesk can reach its guidance over the next few years, this free cash flow multiple should come down quickly, making Autodesk a great pick to buy and hold over the next decade. 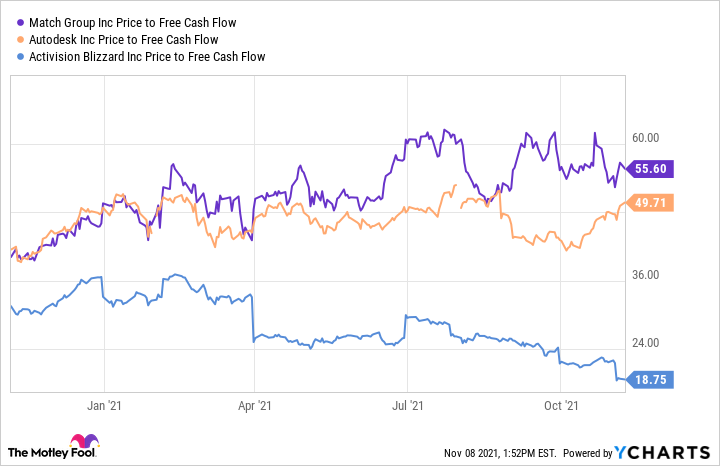 Unlike the two companies listed above, Activision Blizzard trades at a P/FCF ratio below the market average, at 18.75. The company has gone through some troubles this year, including dealing with the fallout from sexual harassment allegations at its Blizzard division and some significant game launch delays that were slated for 2022. This has caused investors to worry about the long-term viability of one of the largest video game publishers in the world.

However, if we strictly look at Activision Blizzard's performance, the company is doing just fine right now. In the third quarter, net bookings (the revenue/sales equivalent for video game companies) hit $1.88 billion, which was slightly above its prior guidance of $1.85 billion. This has been driven by the strong growth of the company's mobile titles. Call of Duty: Mobile, which is now one of the most popular mobile games in the world, grew bookings 40% year over year in Q3, and King, the studio behind Candy Crush, grew revenue 22% year over year. With the new Call of Duty console/PC game just being released and an update to the free-to-play Call of Duty: Warzone game coming in December, Activision Blizzard has a strong set of games to help it grow over the next year and beyond.

Even if the Blizzard studio is struggling at the moment, at a P/FCF ratio of 18, Activision Blizzard is a good business trading at too cheap of a price.

Where Will Match Group Stock Be in 1 Year?