Lucid just delivered its first batch of luxury electric sedans, and it has plans for much more to come.

Shares of electric vehicle (EV) leader Tesla (TSLA 11.00%) have been on another tear. In the last month, Tesla's stock price has risen more than 32%, bringing back memories of last year when its shares provided exponential gains.

But Tesla isn't actually the hottest growth stock in the EV sector right now. That title belongs to Lucid Group (LCID 43.00%), as the Tesla challenger recently delivered its first vehicles to customers. Investors have hung on every news item, and Lucid shares have outpaced those of Tesla in the past 30 days, soaring 93%. Whether the high hopes for the business come to fruition for Lucid shareholders depends on what comes next. 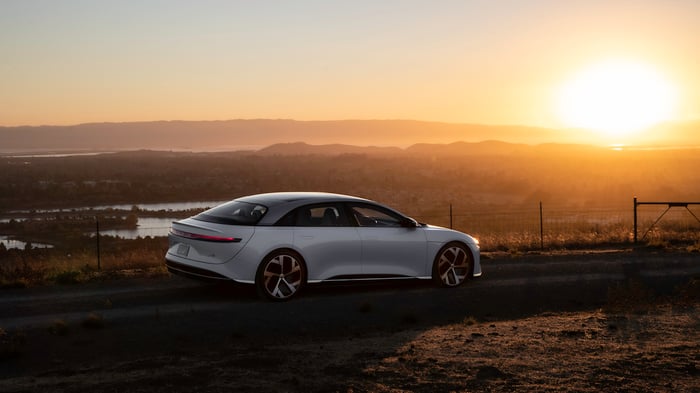 Hoping for the next Tesla

People began wondering whether Lucid could be the next Tesla long before it delivered its first cars. That's partly because its CEO and chief technology officer (CTO), Peter Rawlinson, was formerly the lead engineer in developing Tesla's Model S. Rawlinson touted the importance of being a technology leader in the EV space from the beginning. One area that Lucid seems to have lived up to that hype is with its battery technology.

Its top-of-the-line Air Dream Edition was given an Environmental Protection Agency rating of up to 520 miles on a single charge, making it the longest-range electric vehicle ever rated by the agency. But beating Tesla's longest-range offering by more than 100 miles doesn't make Lucid the next Tesla yet.

Although the Dream Edition reservations sold out, that amounts to 520 vehicles to be delivered. For a car that sells for $169,000, that will bring some nice initial revenue for Lucid. But Tesla has delivered 627,350 vehicles through the first three quarters of 2021, and it is well on its way to beating the 750,000 guidance that it initially provided investors this year. Tesla also reported $1.6 billion in net income in the third quarter on automotive revenue that grew 59% year over year.

Investors willing to take the risk

With Lucid passing its first test for investors and delivering its initial Air sedans before the end of last month, the stock picked up momentum. Share prices have soared 55% since the company confirmed plans for those deliveries in late October and announced a car rally with the new Dream Edition owners to show off the cars and their technology.

That has brought the company's market cap to more than $67 billion. 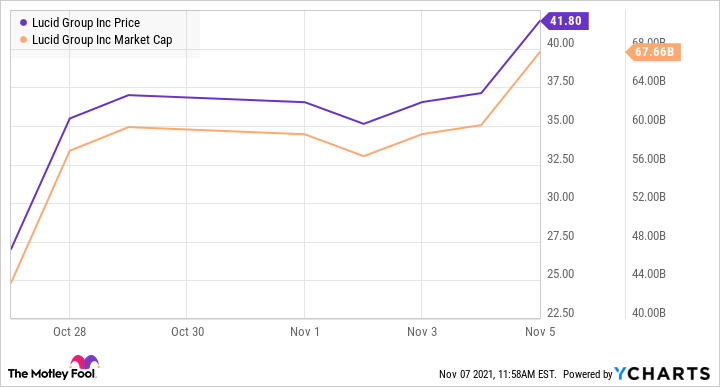 Beyond the 520 Dream Edition models, the company will then begin filling the remaining reservations for the Air Touring and Pure models in 2022. At last count, those reservations totaled over 13,000. Lucid believes it will produce 20,000 Air sedans in 2022, bringing in revenue of about $2.2 billion. It then expects to double that in 2023 as it begins production on its next vehicle, the Gravity luxury SUV.

It's all about execution

Lucid management says it already has enough cash to fund its operations at least through next year. By 2023, it will have manufacturing capacity at its Arizona factory for more than 53,000 vehicles. Lucid expects to enter the European and Middle East markets beginning in the first half of 2022, and then China in 2023.

But the company must execute on all of these ambitions. If it does, management believes it will have annual revenue approaching $10 billion in calendar year 2024. As measured by the amount of work needed to get there, that's a long way from where the company is today. But three years isn't very long in terms of an investment thesis playing out.

The revenue figures currently only factor in vehicle production. The company believes it also has future opportunities to exploit its battery technology for energy storage systems for home, commercial, and utility-scale energy storage markets.

If Lucid does execute just its manufacturing plans successfully, today's valuation won't seem excessive in two to three years. Investors who believe the company will perform as planned should believe this hot growth stock is still a buy, even after its recent run.