Dividend increases aren't a guarantee. But for companies that have strong track records for making them, they're a safe bet to continue unless something goes disastrously wrong. And if a company continued raising dividends during the pandemic, that's a great sign that it can withstand significant adversity.

Both Abbott Laboratories (NYSE:ABT) and Enbridge (NYSE:ENB) raised their payouts last year and have done so for decades. And with the companies still doing well this year, investors should expect another round of rate hikes as early as next month. 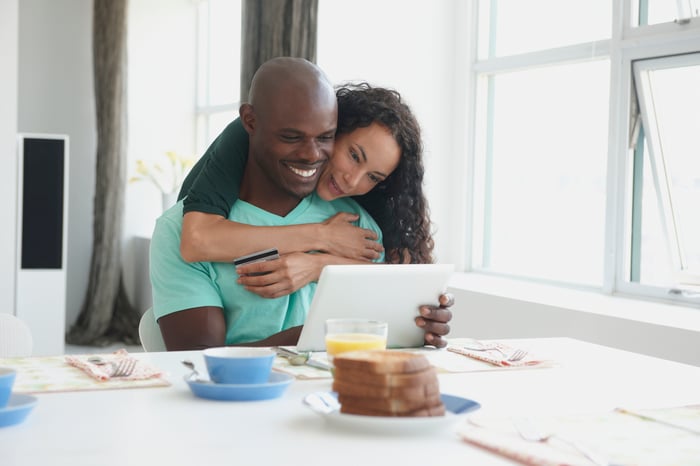 It was December 2020 when healthcare giant Abbott Labs last announced a rate hike. It was the 49th year in a row the company increased its payouts. It's not uncommon for a company with that long of a streak to make a modest 1% increase, just to keep the increases going. But Abbott Labs chose to reward its investors significantly, with a rate hike of 25%.

Although investors should never assume a rate is a guarantee, it's nearly that with Abbott Labs. One more increase to the dividend would make the company a Dividend King, solidifying its presence as one of the top dividend stocks in the world. And there are certainly no signs of danger for the business; Abbott Labs reported its third-quarter numbers in October, and sales of $10.9 billion for the period ending Sept. 30 were up 23.4% year over year. Although it benefited from COVID-19 testing volumes, even without that boost its sales grew by 11.7% when compared to its pre-pandemic numbers in 2019 for the same quarter.

Currently, the healthcare stock pays a yield of 1.4%, which is right around the S&P 500 average. But if you buy and hold shares of Abbott Labs, you're likely to be earning more on your investment over time as the dividend hikes boost your recurring income. Although I wouldn't suggest another 25% rate hike is coming next month, it would be surprising not to see another double-digit increase from the company.

Pipeline company Enbridge doesn't have nearly as long of a streak going as Abbott Labs has. But the oil and gas stock is no slouch, either. Last December, Enbridge increased its dividend for the 26th straight year, when it raised its payouts by 3%. On average, the Dividend Aristocrat has been increasing its recurring payments by a compound annual growth rate of 10%.

And now, with the oil and gas industry in better shape due to stronger demand for oil -- as is suggested with oil prices reaching multi-year highs -- that's led to better results all around. In the industry, companies use distributable cash flow (DCF) to assess their performance, which excludes non-operating items and can help assess whether a dividend is safe or not. For the period ending Sept. 30, Enbridge's DCF of 2.3 billion Canadian dollars was up 10% from the prior-year period. For the full year, it expects DCF per share to be between CA$4.70 and CA$5.

How big the company's rate hike is next month will likely depend on where within that range Enbridge believes it will finish the year. Enbridge targets a payout ratio that's no more than 70% of DCF. At CA$4.70, that would put its current annual dividend of CA$3.34 at just outside that range at 71%. However, if it finishes at CA$5, then the payout ratio will be slightly under 67%. In all likelihood, Enbridge will raise its payouts again, it's just a matter of how much they'll be. Given the strong demand for oil right now, I wouldn't be surprised if it's a higher rate hike than a year ago. And that makes its already high yield of 6.2% look even more attractive for income investors.